On paper, the Minnesota Third Congressional District is “purple”.  And by “on paper”, I mean “In the Strib“.

Yes, for decades the district was represented by moderate, IR-era Republicans like Jim Ramstad, Bill Frenzel and Clark McGregor.

And Erik Paulsen has had to work with a lot of different constituencies to win in the Third; he’s done it by showing ample respect to the parts of his district that aren’t, perhaps, solidly GOP – places like Brooklyn Park, Edina and Bloomington…

…even as he’s worked hard in conservative strongholds like Maple Grove.

And it’s worked.  Paulsen beat Ashwin Madia by something like eight points to succeed Ramstad in 2008 – a lousy year for Republicans – and destroyed Jim Meffert in 2010 by over twenty.

This year’s DFL candidate is  Brian Barnes.  We’ve talked about Barnes before; he claimed the Minnesota police unions were “extreme right-wing” (they’ve endorsed Amy Klobuchar) and his campaign misrepresented Representative Paulsen’s position on a controversial bill.

So far, Barnes’ campaign has “opportunities for improvement” – even compared with the non-entity Meffert, to say nothing of fhe relatively savvy Madia bid.

More bizarre, perhaps, have been some of his back-office choices.

If you come to the big city from rural America, you get used to the cool city kids sniffing down their noses at you.

Now, how about this one? 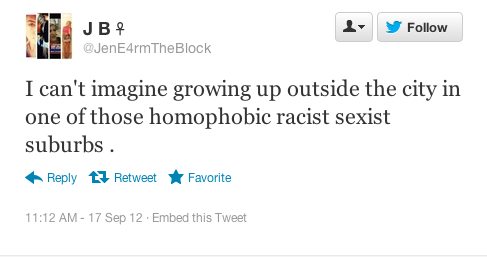 This I’d be more prone to call “bigotry” – pretending to know the hearts and souls of people she’s apparently decided to disparage, or just filling in her own stereotypes, based on perhaps the least dispositive trait a person can have; where they live.

Of course, it’s Twitter.  And if there’s a medium with a lower barrier of entry than blogs, it’s Twitter.  The format lends itself to breezy generalization and letting out one’s inner douchebag.  I’ll cop to it; it sometimes brings out the worst in me, too.

But if you’re a candidate running for office in a district that includes towns like St. Michael,  Loretto, Albertville, Rockford and other exurban holdouts as well as burbs like Edina, Bloomington, Minnetonka and the like, you might think it’d be bad form to  employ someone who practices active bigotry toward a big, poitically-active chunk of your constituency.

But Barnes does.  This is “JenE4rmTheBlock”‘s business card 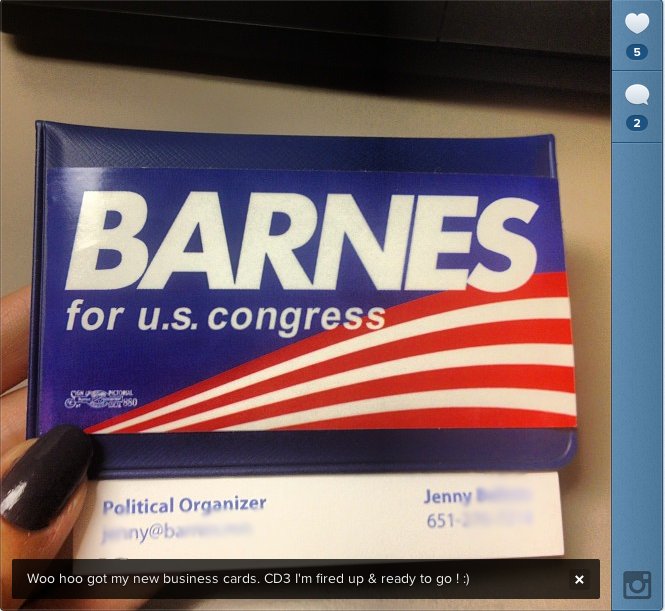 (I’m not going to post the Instagram link to the photo under the same name as the Twitter feed. It includes an email and what appears to be a personal phone number. If someone wants to claim “it’s not teh same person” by way of trying to impugn the story, I’ve got it. It’s her).

But I’m not doing this to kick dirt on Ms. “4rmTheBlock”.  This is aimed squarely at Brian Barnes. campaign

Candidate Barnes:  is it your position that the people of Saint Bonifacius or Luverne “don’t get how the world works”, or that the folks in Minnetonka, Maple Grove and Bloomington are “Racists” and ‘Homophobes?”   Your “political organizer” has just insulted two groups of people who, together, make up roughly 100% of the district you’re running for.

So we’ve got editing problems, some magical invisible freebie polling, and a “Free-spirited” staff.  What else could go wrong with Barnes’ campaign?

4 thoughts on “The Campaign That Couldn’t Shoot Straight, Part III: “How Ya Doing, Rockford?””