I live in the Fourth CD – St. Paul, Ramsey and an unfortunate tail of Washington counties – and I’ve focused mostly on that Congressional race so far.

But if you’re a conservative, you need to pay attention to the race in CD8, where Chip Cravaack – one of the single greatest Cinderella stories of the 2010 cycle – is fighting a very tough re-election bid.

He’s up against Rick Nolan, an old-school northwoods ultraliberal DFLer who served in Congress back in the statist seventies.  While the MN DFL is an intellectual throwback to a time when neither US industry nor the notion of big government had any real challenges, Nolan is a literal throwback:

The American Action Network just released an infographic about Nolan: 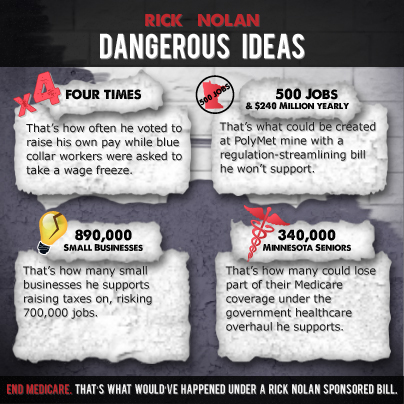 It’s suitable for framing and sending to any relatives you have up north.

Or just emailing.  Whatever.

The DFL is trying to tell northern Minnesota that they can return to their glory days of the 1960’s and 1970’s by returning to the government of the era.  It’s just not true.

4 thoughts on “When Recycling Is Just Plain Wrong”