The Soviet Union, as formidable as it once appeared, has been a dead letter for over 30 years. While Vladimir Putin may have one reliable client state in Belarus, the rest of the former Soviet republics and the entirety of the Eastern Bloc have little interest in getting the band back together, so while the endgame remains in doubt, it’s highly unlikely Putin’s latest gambit will redound to his benefit.

If your day is gone, and you want to ride on, Ukraine
Don’t forget this fact, you can’t get it back, Ukraine

Apologies to J. J. Cale. But have you noticed the near lockstep unanimity on social media about Ukraine? Something about it seems, I dunno, off. Victor Davis Hanson offers a few thoughts about the narrative:

On cue, an embarrassed Left now offers some surreal takes on why Putin went into Crimea and eastern Ukraine in 2014 and again into all of Ukraine in 2022—while mysteriously bookending the four invasion-free Trump years. We are told that hiatus was because Putin got all he wanted from Trump and rewarded him by not invading any of his neighbors.

And Hanson is just getting started:

Were Vladimir Putin and his advisors more or less delighted that their poodle Trump thankfully flooded the world with price-crashing oil? They were thankful Trump at least had killed Russian mercenaries in Syria?

Putin himself was content that the United States got out of his own advantageous missile deal? Was he thrilled that Trump sold once-taboo U.S. offensive weapons to Ukraine? Did the Kremlin grow ecstatic when Trump upped the U.S. defense budget? And was Russia especially thankful that Trump jawboned NATO into spending another $100 billion on defense? Did Putin clap when Trump killed Soleimani and Baghdadi, and bombed ISIS out of existence? 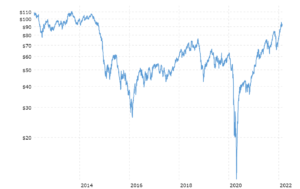 It’s not a coincidence that Russia, an oil-producing country, was pretty flush in 2014, which made Putin’s adventurism at that time cost-effective. Things changed after the Light Bringer left office; while the price of oil fluctuated in the first two years of the Bad Orange Man administration, prices dropped thereafter, before the huge drop in 2020 which was entirely related to the world economy grinding to a halt. Since 2021, the trajectory has been back toward the price levels of the Obama years. We all see the impact at the pump and energy costs are a huge factor in inflation generally, even beyond the Fed making the money printers go brrrrrr. So if the money is flowing into Russia and the current administration has shut down the pipelines and the frackers, are we particularly surprised that ol’ Putin has gauged this moment as the time to make a move?

There’s more, of course. Back to Hanson:

Joe threatened the toughest sanctions in history that on Wednesday would deter an invasion and by Saturday were never meant to at all. But Biden promises someday a “conversation” to decide whether at some time he still will issue the toughest sanctions in history. Until then, he invites Ukrainian President Volodymyr Zelenskyy safe passage out of Kyiv—the quickest way to destroy the dogged Ukrainian resistance.

Left unsaid are the years of rapacious Biden family profiteering in Ukraine, a decade of leftist passive-aggressive love and hate of Russia, from obsequious reset to greedy Uranium One to pathetic “tell Vladimir . . .” to unhinged vetoing of sanctions against the Nord Stream 2 pipeline.

Oh, there’s more to be said, a lot more. But for this moment one thing seems to be clear — the fog of war is less from the battlefield and more from the fog machines all around us.