Big Left has been warning us that there’s a wave of ideological hate crime just around the corner, and that  you gotta watch out for those crazy right-wingers.

A gunman attacked a Republican congressional baseball practice this morning.  His mission?  “Kill as many Republicans as possible”.

Shortly after the shooting Wednesday morning at a congressional baseball practice, Rep. Mark Walker (R-N.C.) told NBC News that it appeared the “gunman was there to kill as many Republican members as possible.” Walker, who was at the practice for the upcoming annual congressional baseball game in Alexandria, Virginia, confirmed he was “shaken but okay.”

Hello, Liberals – when so much of your side is awash in demented hatred (the real thing, not the “disagreement with our narrative is hate” thing that so many of you jabber about), and given the instability wrapped in entitlement that so many people on your side have, what do you think is going to happen?

Be careful out there, Real Americans.  It’s gonna get worse before it gets better.

UPDATE:  While Berg’s 19th Law is still in effect (“Nothing the media writes/says about any emotionally charged event – a mass shooting, a police shooting, anything – should be taken seriously for 48 hours after the original incident.  It will largely be rubbish, as media outlets vie to “scoop” each other even on incorrect facts”), the shooter’s Facebook page indicates he is a Sanders supporter.

UPDATE 2:  The WaPo has ID’ed the shooter as a 66 year old Illinois man.

UPDATE 3:  As usual, many on the left are acting like poo-flinging baboons.

UPDATE 4:  James Hodgkinson is the name, and this is from his Facebook page: 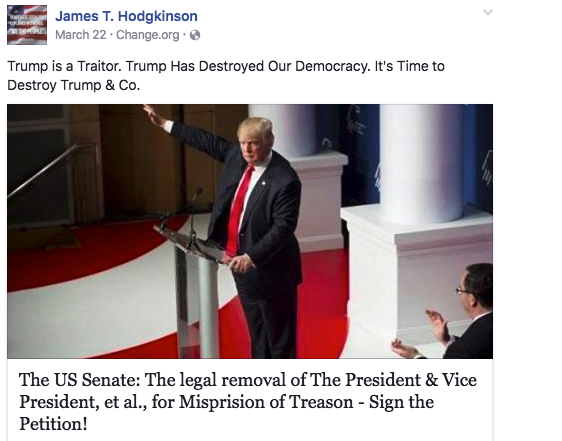 Apparnetly “& Co” is “All Republicans”.