Like about 45,000 other Twin Citians, I went out to take my first ride (and last free ride, unless I “jump the turnstiles” like, let’s be honest, about half of all the riders will be doing from now on anyway) on the “Green Line” on Saturday evening.

I walked from my house in the middle of the Midway down to University – which was a pleasant fifteen minutes, even though the rain that’d been falling all day was threatening to return at any moment (and did, when I got to the platform).

Of course, the Met Council had planned a whole day of festivities up and down the line – most of which got stormed out during the day, with howling winds and driving rain expressing perhaps divine ire with the train that has disrupted so much about life in the Midway, and promises to do so much more…

…yeah, yeah, I know.  That’s getting a little hyperbolic.

And there’s nothing in the world more annoying than drunk twentysomeethings.

One of them, reeking of vodka, decided to play “I am Mitch’s Shadow”, following me around the platform, standing well inside my personal space.  One of his less-hammered, less-stupid friends called him away right about the time my slow burn was starting to show…

…but I thought “what a great metaphor for public transit in general”.

Anyway – I got on the train. 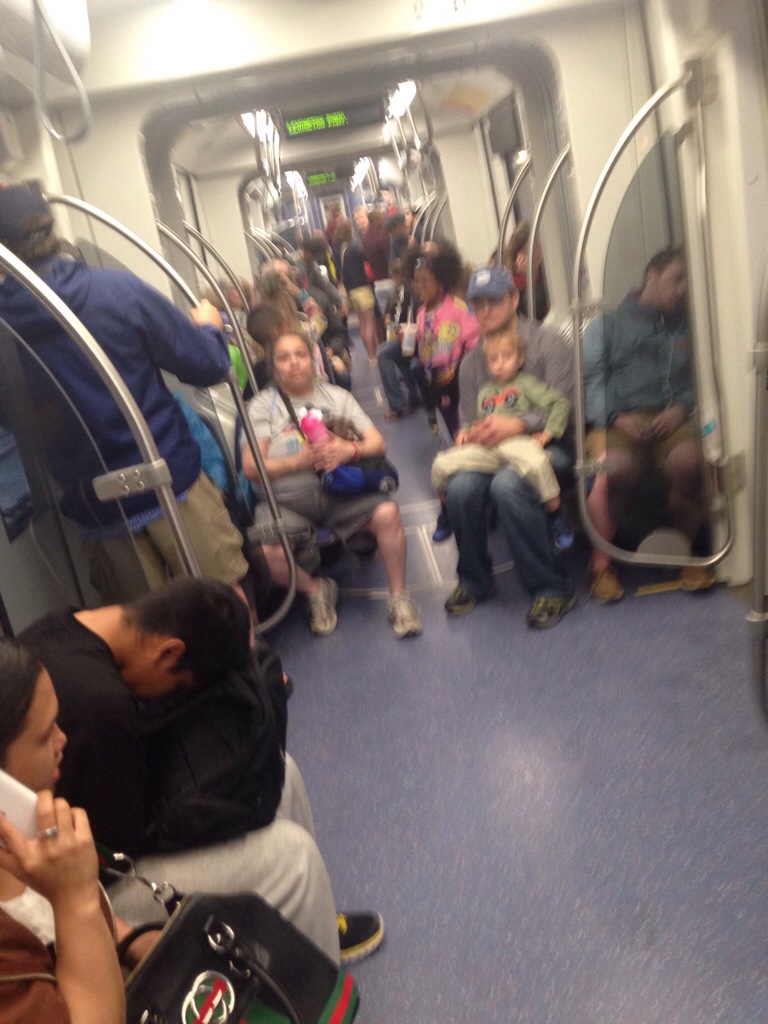 It was largely jammed with people you just know haven’t been to Saint Paul (other than the Ordway and a Wild game) before, and probably never will again.

Not a single soul got off the train at Lexington.

At the “MPR” stop (that’s not what it’s called, but I didn’t bother looking at the route card), the skies opened with a burst of heavy rain.  I looked out the windows and saw a gaggle of bar-hoppers sprinting to try to make the train…

…as it pulled away from the station.

I got off the train at the end of the line – Union Station.  I looked at the time – it had taken me nearly an hour to go rom my front porch to the Depot.  That’s a trip that takes me:

The rain was still pouring down – and I was chagrinned to note that for all the billion-plus they spent on the “Green Line”, and quarter-billion more they spent on Union Depot, that they could neither have the train end inside the station (it ends in the middle of Fourth Street, in front of the depot) nor put a roof over the station that covers more than a dozen people from a sprinkle.  I dashed up to the Depot…

…and found the highlight of the evening. 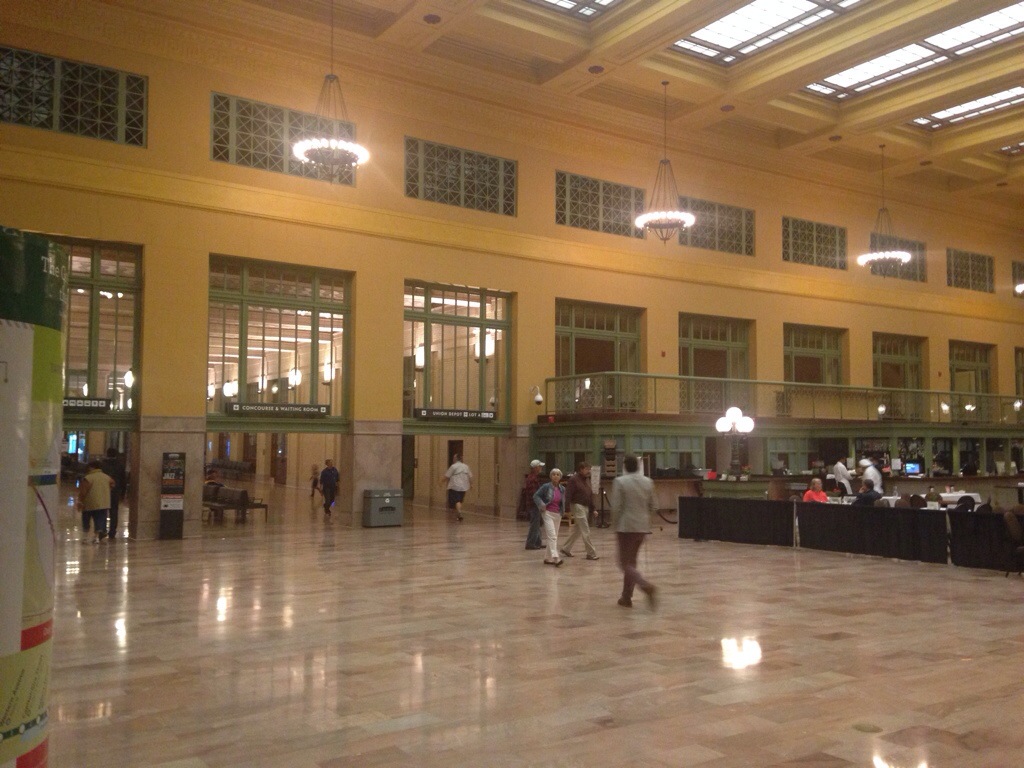 I gotta hand it to the remodelers – they did a helluvva job rebuilding the formerly-seedy depot.

Wait – the remodelers were us, the taxpayers!  We remodeled it!  And for $200 million of our hard-earned money, it better have been an awesome job!

Now, I had never been to the back half of the depot – the concourse that takes people out over the Amtrak tracks and (now) bus ranks.  I walked through it, and thought… 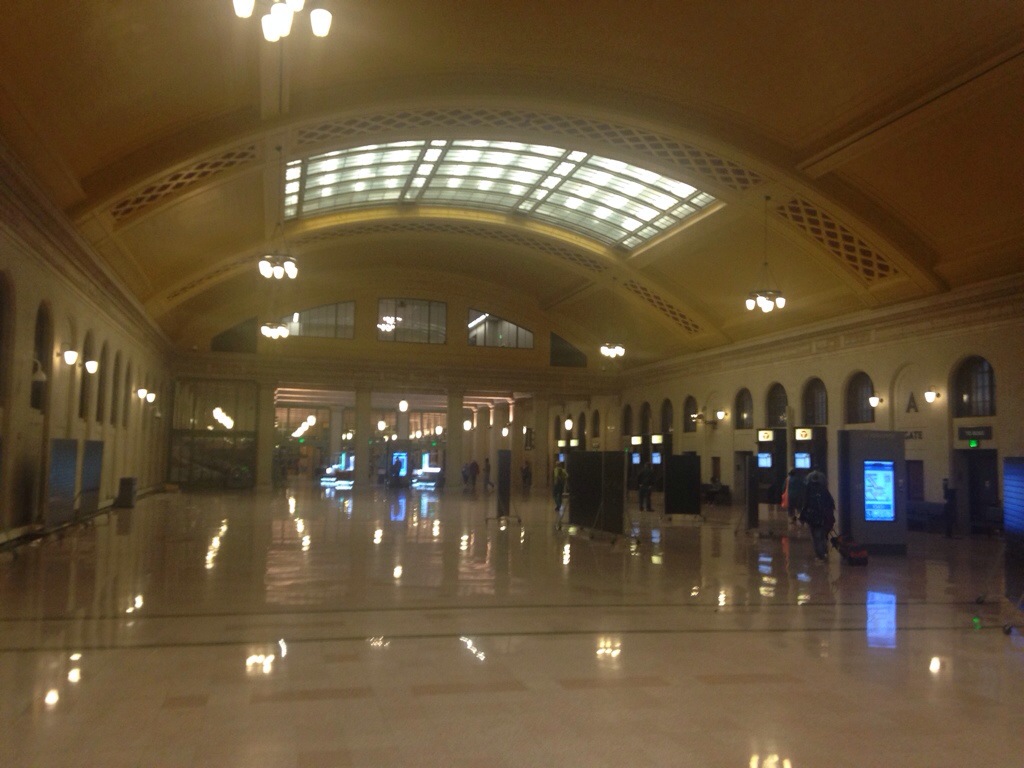 …”this must have been a great place to come home from World War 2 to”.

Of course, if Amtrak in 1945 had been like Amtrak is today, some of those GIs would still be waiting on a train in Cleveland.

Indeed, that was the jarring part; this whole quarter-billion-dollar building, magnificent and historical though it is, serves:

…per day.  Assuming the Amtrack trains show up. 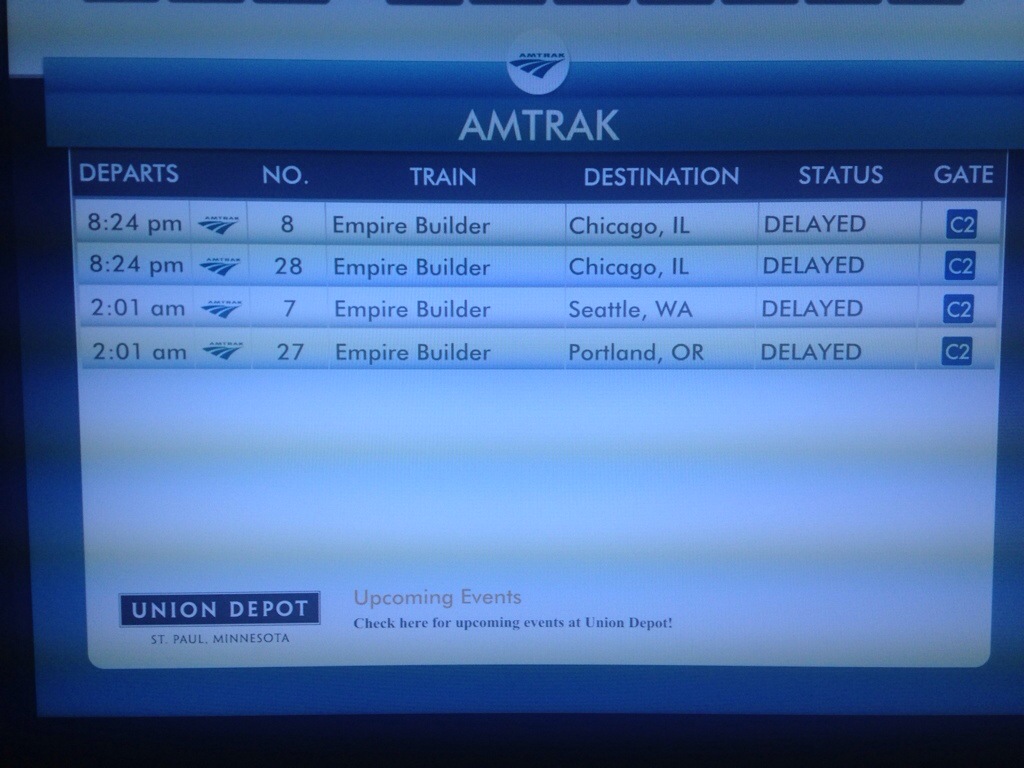 But they do have big plans. 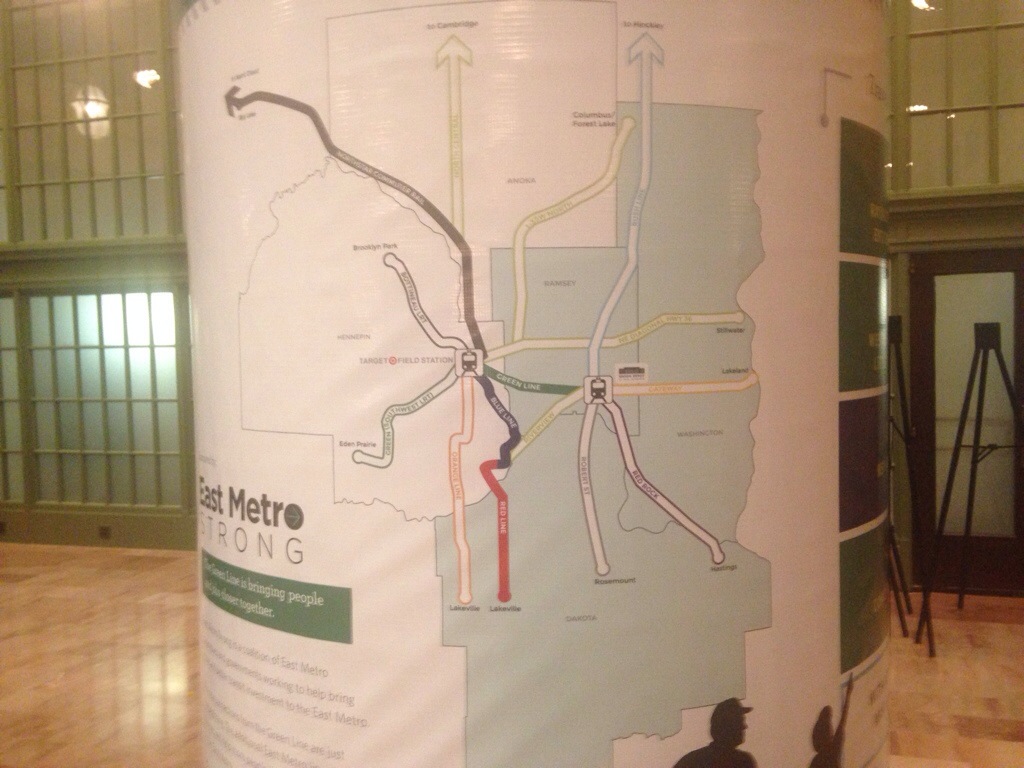 Still, I like a good historical building as much as the next guy.  Especially when I paid for it.  So I hung around and checked out the architecture.

But finally it was time to leave.  I walked back out to the stop (it was only drizzling) and took a seat at the back of the train.  A couple of Russian women chattered away in the next row.

A young, bearded twentysomething guy in a “Marines” baseball cap dragging a set of rolling luggage staggered uncertainly to the back of the train.   Smelling like Foster Brooks’ bathroom, he tried to open the driver’s compartment.  For like four minutes.

Then he plopped down in an empty chair and dialed his cell phone, said “Hi” to someone, and for the next 3-4 minutes repeatedly slurred “Dude – I’m almost in Saint Paul”.  Over and over and over.

Then – I’m not exactly sure why – he started trying to pick a fight with the guy across the aisle from me.  He reminded me of a young, very very intoxicated Jack Nicholson, only even drunker than that.  As a group of us made it clear we weren’t in the mood for any nonsense, he backed toward the door, stumbling a few times as he tried to drag his bags through a pole, but with his eyes glowing demonically.

I rode down Uni to Raymond, and walked to the Dubliner Pub.  I had a beer, and watched people playing “Jenga” with a set made out of 2x4s.

And watched as the players tried to remove as many pieces of wood from the pile as possible without being the one that’d bring the whole thing crashing down. 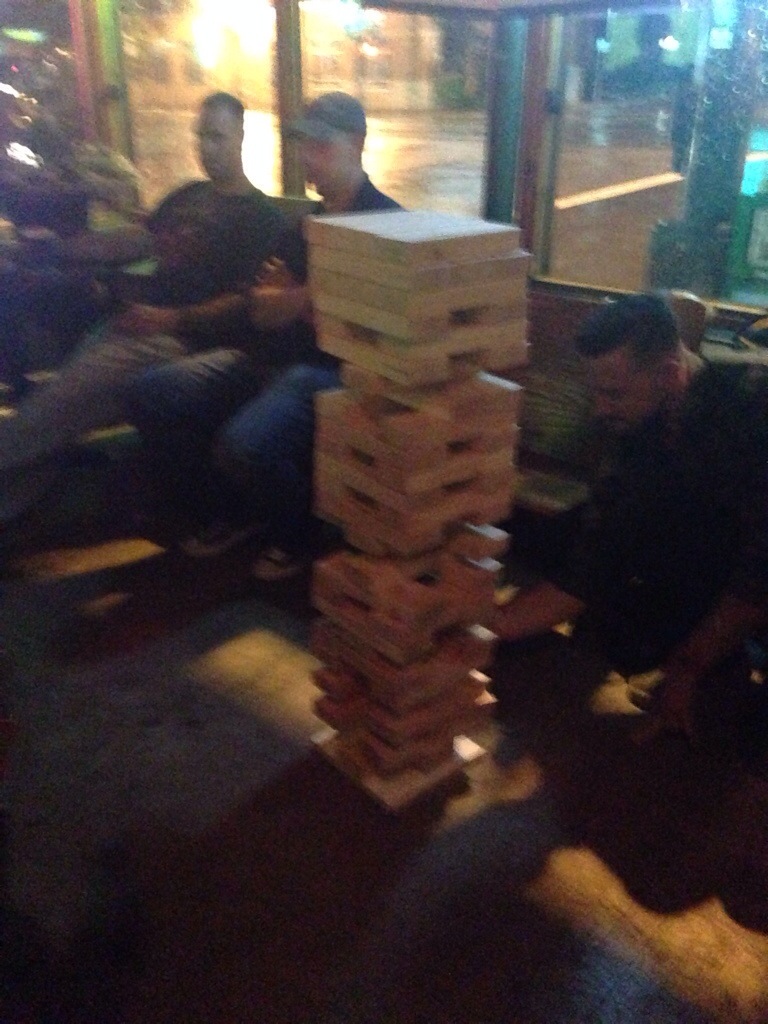 I finished my beer and walked out into the damp evening, catching a train back to Hamline from Fairview.