A groundbreaking new report by the Center of the American Experiment (henceforth CAX) shows what a lot of us are seeing in our own lives, social circles and workplaces: Minnesota sucks, and people are leaving. 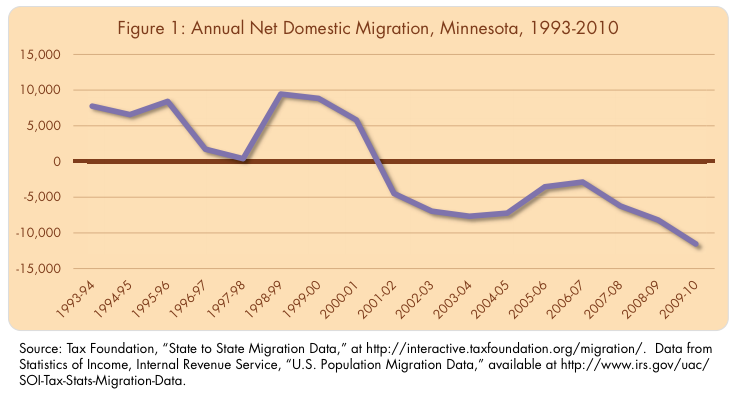 Courtesy of the Center of the American Experiment

Like most economic questions, making the direct connection between state tax policy and economic growth is difficult. As William McBride—chief economist at the Tax Foundation—admits, “the economy is sufficiently complex that virtually any theory can find some support in the data.”

And there will, no doubt, be controversy about this report (which you should read). But it’s conclusion (of sorts, with emphasis added):

Though data can deliver mixed messages, data from the Internal Revenue Service (IRS) point to one clear and worrisome fact: Minnesotans and their wealth are moving to Southern and Western states. Between 1995 and 2010, an average of $340 million in income—based on 2010 dollars—moved each year from Minnesota to other states—a movement totaling more than $5 billion over 15 years. The states that on net receive the most Minnesota income tend to be low tax states such as Arizona, Colorado, Florida, Georgia, Nevada, South Dakota, Texas, and Washington.

“But wait!”, someone might interject. “Of course people leave. They retire to someplace warmer!”

Working Stiffs: For starters – would retirees move to Sioux Falls?

First, many of the leading destination cities are economic centers, not retirement centers. Retirees certainly account for a large portion of the people and income leaving Minnesota. Some of the places receiving the largest portion of people and income from Minnesota include retirement destinations like Naples, Fort Meyers, and Scottsdale. But there are a large number of economic centers in the South and the West that are clearly attracting many more workers than retirees. Cities like Atlanta, Seattle, Dallas, Austin, Sioux Falls, and Denver have all gained substantial numbers of people and income from Minnesota…if Florida and Arizona were removed from the list, the income from receiving states would still far outweigh the contributing states.

Working people have joined the retirees, in other words.

Second, as migration and retirement slowed during the Great Recession, Minnesota continued to lose substantial income to low-tax states in the South and the West that are not the locus of retirement.

The net movement of income to Florida dropped from $149 million in 2008 to $77 million in 2009, the first time Minnesota lost less than $100 million to Florida since 1996. The movement of income to Arizona also dropped substantially. Despite these drops, most of the other top states receiving income from Minnesota showed either no change or a bump in the income received from Minnesota.

Both Texas and Georgia gained more income inboth 2009 and 2010, while states like Colorado, Washington, South Dakota and North Carolina remained in a normal range.

All The Cool Working Kids In Liberal Hellholes Are Doing It: Minnesota isn’t the only high-tax “progressive” cesspool experiencing this problem:

analyses of the movement of income to and from other states show similar patterns of movement from high tax states and to low tax states.

In his book How Money Walks, after analyzing the same IRS data set for the entire country, Travis Brown concludes: “When you look at the mapped data over this period of time an unmistakable pattern emerges: income moved from high-tax states to states with no personal income taxes or lower per capita taxes.”11 In addition, a recent Manhattan Institute report documents the “exodus” from California

http://www.shotinthedark.info/wp/wp-admin/media-upload.php?post_id=36025&TB_iframe=1&width=640&height=607 using the data.12 The authors found, “as a general rule, Californians have tended to flee high taxes for low ones.” Thus, California, a state with a similar tax climate to Minnesota but very different weather, is experiencing similar migration patterns. 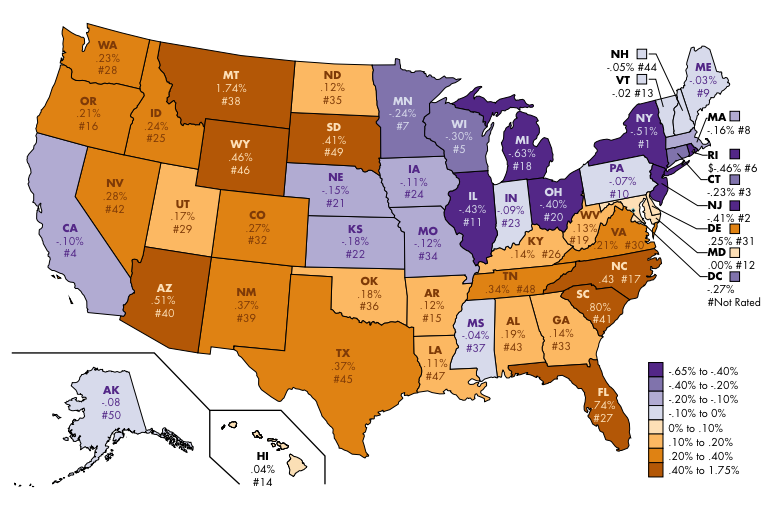 Courtesy the Center of the American Experiment.

It’s The Young Workers, Stupid: The fifth conclusion? Younger workers in their prime earning years are not moving to Minnesota:

The people considering a move tend to be younger and looking for better jobs and economic opportunities. Table 1 [on page 3 of the report]shows a steady decline in the average size of the households moving to Minnesota, dropping from households with 1.94 exemptions per return in 1996 to 1.75 in 2010. This drop suggests that fewer families are choosing to make Minnesota their home.

We’re getting an influx of college students and lonely drifters. Families in their peak earning years? Not so much.

The conclusion? The CAX puts it diplomatically:

The data reviewed in this report show first and foremost that Minnesota is consistently losing the battle to attract people and income to the state. Year after year the state on net loses thousands of people and undreds of millions of dollars. Regardless of how large the loss is, it is a loss which demonstrates Minnesota is not competing well with the rest of the country. That’s a fact that should be worrisome to every Minnesotan.

I don’t need to be diplomatic; the data show us that tough economies and high taxes didn’t even mix in the 2000s, when we had a government that was split between bobbleheaded spendthrift DFLers and responsible Republicans, and we held onto sanity by our fingernails.

I can’t tell you the number of middle-class, hard-working, tax-paying people I know who’ve told me to pencil them in for anything happening more than 6-12 months out; they’re looking to move someplace where they aren’t forced to be happy to pay their hard-earned income for a Minnesota that just gets worse and worse.

37 thoughts on “Voting With Our Feet”