I don’t care much about polls released almost a year before an election.

But I tilt an ear toward some of the market-driven polls – Intrade and such – because people aren’t just giving opinions; they’re banking money on outcomes.

Just a tilt, mind you.

And with that in mind – the various market-driven indices are showing mixed results for the fall:  as of Saturday, they’re showing…:

It is, of course, a moving set of indices:

The chart shows how these three main predictions have shifted during the course of the year. Obama had a small spike when Osama Bin Laden was captured, but otherwise he’s been on a slow decline for most of the summer and early fall, with a slow resurgence in the late fall and early winter. The Senate has been relatively steady with small spikes corresponding to shifts in specific seats, including retirements and announcements of new candidates. The House has shown the most flux with a steep decline that mirrored the President’s, but continued longer into the fall. Yet, it has taken a sharp turn towards the Democrats in recent weeks: 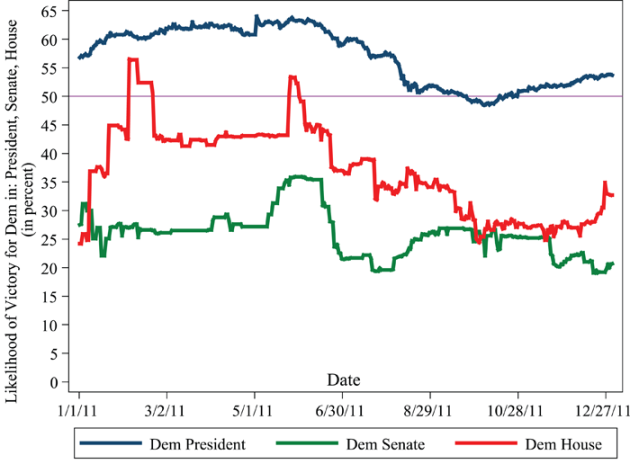 I can’t help but think that the unsatisfying nature of the GOP campaign so far hasn’t helped.  I’m going to guess things switch up after Super Tuesday…

…and bog back down again when the media goes all-in for Obama around Labor Day.

4 thoughts on “A Victory, If We Deserve It”