I hear people – both around and about and, of course, in the media, criticizing music in terms of “decades” – comparing “the sixties” with “the eighties”, for example, as if musical styles begin and end in years with zeroes at the end.

And the contention – among some, anyway, was “the eighties sucked”.

It’s nonsense, of course.  For starters, I spelled out the real history of popular music, at least since World War 2, a few years ago – in a post that’s gotten a bit of traction around the musical blogosphere.   There was no “eighties”.  There was a period from about 1980 to 1986 – a period where pop music went through an incredibly dynamic period, where genres bent and blended and mutated, and where music that’d been subversive an alternative in the late seventies became the mainstream.  It was an exhilarating thrill ride, one of the few times in music history when the “alternative” largely was the mainstream.

It was also a time very like today, in a number of ways – technology, for better or worse, was making it easy – or easier – for almost anyone to make incredibly sophisticated music.  Long before the Internet went mainstream, there was no way to break the stranglehold of the big record and media companies on the market – but the dawn of inexpensive electronics, the very birth of “ubiquitous media” and the ragged beginnings of the democratization of technology started the slide toward the near-complete disintegration of the traditional record company as a hindrance (or help) to musicians in reaching an audience.

But if you grab 1000 people off the street and ask them to describe “the eighties”, culturally and musically, you will likely get a pretty drearily predictable bunch of answers. 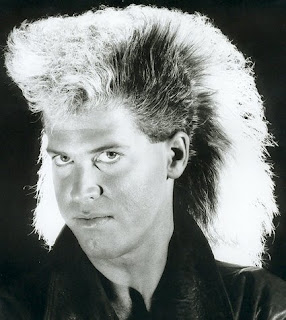 It was the putative era of big hair.  Which, when combined with newly-affordable technology in the hands of people who understood style much better than they grasped technique, led to…

A Flock Of Seagulls.  (Or, on this side of the pond, and even worse, Men Without Hats)

Had we actually had a nuclear war in 1985, it’s possible the only things to survive might have been cockroaches, Twinkies, and A Flock Of Seagaulls – or at least their ‘dos.

But “the eighties” – or the first six years or so of the decade, which I christened “The Alternative Era” – were distinguished by a number of factors that have, throughout pop music history (and I mean throughout – including well before the rock and roll era) made for  better-than-average popular music.

Ebony And Ivory:  For the first time since the mid-sixties, “black” and “white” became, for a moment, largely irrelevant in popular music.  And this is important, not for the sake of sappy PC bromides, but because music always benefits when styles intermingle.

Technology: Every time there’s a revolution in the technology used to produce art, there’s a revolution, or at least enhanced evolution, in how art is produced and in how many people produce how much of it.  For example, it was in the 1840’s that Steinway brought mass-production techniques to the building of pianos.  Soon, the piano was the dominant instrument in American music – and keyboard-based music was the dominant style, until Elvis Presley.

There was a similar revolution in the eighties; thanks to ubiquitous production of solid state and integrated circuitry for the consumer market, suddenly – as in, between 1979 and 1983 – it became possible for people to own technology for under $2,000 that would have cost 5-10 times as much five years earlier.

The marquee innovations?  The Yamaha DX7 and DX9 synthesizers…

…which brought digital synthesizer technology down into the reach of the regular working musician.  And the Ensoniq Mirage…

…which did the same for digital sampling, making it possible for anyone to reproduce almost any recorded sound – from an orchestra or horn section to dogs barking – in a keyboard that weighed under 30 pounds and cost under $2K.

And the TASCAM four-track cassette deck… 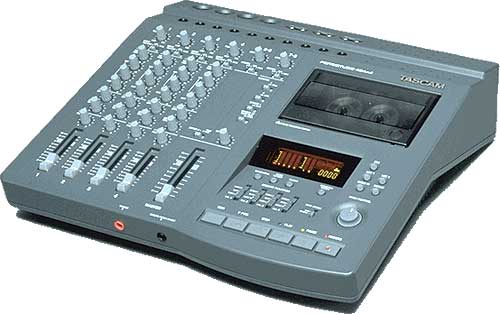 …which didn’t, itself, revolutionize the recording industry, but did in fact plant the flag on the beach for the idea of the inexpensive, usable home recording studio for everyone, bringing the level of technology that’d been common in a 1960’s studio to anyone’s basement for under $1,000 (in the same way that “Garage Band” does with digital recording techniques and technology today for Macintosh users).

I’ve been writing for the past two years about the raft of great albums that made their debuts about thirty years ago.  But I’m going to step it up.  For the next month, every weekday will feature a different reason music in “the eighties” – largely, but not entirely, the first half of the decade – was every bit as good as anything in the pop music era.

I’ll be dividing the month up by weeks; one week for the boom in “black” music – although not always among “black” artists – one for the return of rock and roll, one for a case for Britain, one for the highs, lows and highs of technology in music, and one for “the fringe” that took root in the decade.

This should be interesting.

5 thoughts on “The Real Eighties: One Of My Obsessions”