Tom Wolfe, author of a shelf full of seminal American journalism and literature, dead at 88.

And later yesterday, word circulated on social media (although I’ve found no confirmation yet in the dead-tree media) that Nick Coleman, longtime columnist (as with all columnists in the Twin Cities, it seems) for both the Strib and the PiPress, had suffered a massive stroke and passed away.

More on that when more details are available. 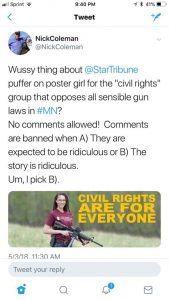 To:  The Twin Cities Media
From:  Mitch Berg, Uppity Peasant
Re:  A Guide To Gun-Grabber Rhetoric

When the topic turns to guns, the Second Amendment and gun control, there is so much that so many of you are groaningly misinformed about.

Now, many of you are actually doing what, 20 years ago, would have been unthinkable; going to people on the gun-rights side who know something about the issue, like Andrew Rothman and Bryan Strawser – as you write your stories.  Not all of you, but enough so that one can be satisfied the facts can be found – which is a good start.

But I think many of you are unclear on a basic, unalterable fact about the gun issue that needs to be reinforced.  I’ll emphasize it here.   Remember it in your dealings on this issue, and you will have a good head start.  I’ll give it some emphasis, so it sticks out:

The Minnesota “gun safety” movement – Heather Martens, Jane Kay, Kim Norton, Joan Peterson, singularly or as a group – has never made a statement about guns, gun rights or “gun safety” that is simultaneously original, substantial and true.

What does that mean?

I’ve provided this little truth table to help you figure it out:

Apply this test to everything Heather Martens, Joan Peterson, Jane Kay, Nick Coleman, “Everytown” and “Moms Want Action” say; is it original, AND substantial, AND true?  Ask someone who knows the facts about the issue – Rothman, Gross, Doar, Strawser, or even lil’ ol’ me.

And you will – inevitably and without meaningful exception – find it to be an absolute truth; the “Gun Safety” lobby in this state has never, not once, said something that was true, original and substantial.

(Want to challenge me on that, gun-grabbers?   Let’s do it. In public.  Neutral turf, neutral moderator, debate rules.  I will win, you will slink from the room at best, slink from the room behind a screen of ad-homina at worst.  I’m up to the challenge.  Let’s pretend that you are, and go for it).