Sunrise was still many hours away when the densely packed forest of the Argonne on the Western Front lit up with the whistles and cracks of fired and exploding artillery on September 26th, 1918 (the same day as the Saint-Quentin Canal offensive).  The mountainous and wild woodlands of the Argonne had been scarred by the war, but plenty of trees remained standing.  The thick forests became shrapnel as the Allied artillery groped to find and destroy the Hindenburg Line trenches that protected the southern flank of the critical Sedan rail junction along the Meuse river.  As the Germans huddled in their positions, awaiting the inevitable infantry attack, they at least felt confident knowing the Allies would have to make their way across large sections of open terrain; perfect targets for machine guns and artillery.

Opposing them would not be the usual assortment of weary British soldiers or beleaguered French troops.  15 divisions of American “doughboys” would lead the charge, with 31 French divisions fighting alongside – 1.2 million Allied soldiers in all.  The American divisions were twice as large as any European counterpart, but for many of the young men in the trench, this would be their first significant action in the Great War.  Over the next 47 days, the United States would get it’s first – and last – taste of the horrors of the trench system of the Western Front.  Reputations would be won and lost, including multiple Medals of Honor for the battle.  And the Meuse-Argonne Offensive would claim more American lives than any battle in the nation’s history*.

American troops ready to march on the Argonne

For the better part of a year after their declaration of war, the United States’ participation in Europe’s death struggle had matched the dismissive evaluation of former German Chancellor Theobald von Bethmann-Hollweg who declared that American support of the Allies would only result in the “delivery of food supplies to England, financial support, delivery of airplanes and the dispatching of corps of volunteers.”  And for the part better of 1917, America struggled to even match that analysis.

The U.S. 1st Division, an experienced division of regular army soldiers with recent combat experience on the American/Mexican border, arrived in France in June of 1917 and was immediately declared to require a complete retraining to endure the grueling trial by fire that the trenches entailed.  For nearly five months, the 1st Division had to “unlearn” the open warfare tactics that General John J. Pershing, the commander of the American Expeditionary Force, wanted U.S. forces to employ despite the deadlock of the trench system.  Pershing had arrogantly believed that American marksmanship and fighting spirit would be enough to overcome German machine guns and trenches.  The Allies needed competent soldiers who could fight in no-man’s-land, not more casualties.  The result would be that nearly a year after the U.S. entry into the Great War, only four American divisions were actually combat ready.

The American army of 1917 held only 135,000 men and a much larger National Guard.  But the combat experience of the regular army had consisted mostly of operations against Filipino guerillas following the end of the Spanish-American War and similar actions against Mexican rebels.  The entire army held only 550 artillery pieces and 55 airplanes, few of which could even actively fly.  The National Guard was even worse, as it was struggling to adapt to the reforms passed by the Militia Act of 1903 (also known as the Dick Act, for it’s author, US Rep Charles Dick).  Prior to this, the Militia Act of 1792 had been the only major piece of legislation dealing with the organization of the National Guard.  The federal government had relied upon the states to train and maintain troops, with a small national army.  The result meant uneven training and equipment state by state, and tremendous leverage by the states to withhold the service of their own Guard.  The solution had been to create volunteer federal units from scratch, meaning men with no prior experience had to be quickly form, trained, armed and shipped overseas.  The results were inexperienced young men and officers with little formal training charging into combat, often with terrible results.  The 1903 Act began to standardize the National Guard.  Coupled with the National Defense Act of 1916, sizably increasing the National Guard to 475,000 men, the U.S. was trying – but failing – to provide even modest modern instructions to their soldiers. 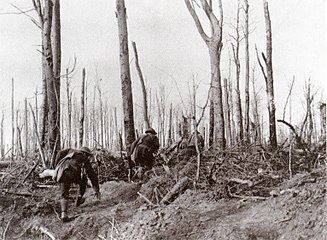 General John J. Pershing was by no means a bad officer, but was seeking to serve two objectives – avoid the system of trench warfare that had butchered millions of Europeans and keep the U.S. Army an independent fighting force.  The Allies had hoped to transfer American units directly under their command in the process they called “amalgamation.”  Doing so would, in the eyes of the Entente, allow American soldiers to learn the tactics of the trenches faster and provide badly need replacements on quieter sections of the front.  In the eyes of Pershing, and the American government, amalgamation was little more than code for using raw American recruits as cannon fodder.  Wilson ordered Pershing to refuse any co-mingling of American troops under Allied command and the American commander compiled, even telling French Premier Georges Clemenceau that he was prepared to see Allied forces pushed back to the Loire River (meaning the loss of Paris) rather than amalgamate American forces into European units.

But the lack of speed of getting American divisions combat ready was increasingly becoming a sore point between the Allies (even if Wilson didn’t view the U.S. as an member of the Allies, but a “co-belligerent”).  Wilson finally relented in late 1917/late 1918, allowing for six mobilizing divisions to immediately ship to France to complete their training under British supervision.  And Pershing “loaned” various units of the American divisions already in France to the Allies during the Spring Offensive, leading to some of the first American action in the war, like the battles of Cantigny, Château-Thierry and Belleau Wood.  Each were Allied defensive victories amid the German offensive, with relatively few American casualties.

The result would be far different when on the attack as part of independent operations, as the Americans would learn in offensives like at the Saint-Quentin Canal and the St. Mihiel salient.  Although the U.S. would emerge victorious again, it would come at higher and higher costs and sow greater doubts in American fighting effectiveness in the minds of their Allies.  As one British general wrote his superiors: “The Americans appear to be in a state of hopeless confusion and will not, I fear, be able to function as a corps…I fear their casualties have been heavy, but it is their own fault.” 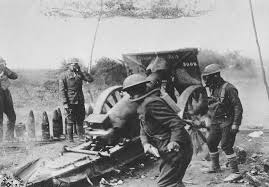 By the time the American 1st Army left their trenches to assault the Meuse-Argonne at 5:30am on September 26th, 1918, American and French artillery had fired more shells (by weight) in three hours than both sides of the American Civil War had fired in four years of combat.  This would be a war experience unlike any other in American history.  It would be an even greater military culture shock for the 850 men of the Siamese Expeditionary Force present at the battle – Siam’s contribution to the Allied war effort.  19 of their men would not return home after seeing the Argonne.

The initial results provided tremendous optimism.  The opening artillery salvo had killed hundreds of Germans and wounded an estimated 10,000 who had been exposed to mustard gas.  Over 33,000 Germans would be taken prisoners in the first couple of days and French units in particular were meeting their objectives, moving six miles past the front.

Progress was frustratingly slow for the Americans, however.  While some units captured their objectives in the first couple of days of the battle, most of the American advance was stymied by the German defense.  The rolling hills and forests of the Argonne were broken up by wide open farm fields – exposing advancing American soldiers to vast stretches were they could not find any cover.  In essence, the American advance placed the army into a veritable funnel aimed directly at the German line.  “I say a prayer for them and then watch through field glasses, fascinated to see the slaughter,” U.S. Corporal Harold Pierce wrote as he watched his comrades march. “They rise, a little disorganized, and press on.”  It became painful clear just days into the offensive that the U.S. strategy had been ill-conceived, or in the words of Pershing, “We were no longer engaged in a maneuver for the pinching out of a salient, but were necessarily committed, generally speaking, to a direct frontal attack against strong, hostile positions fully manned by a determined enemy.”  One of Pershing’s subordinates remarked that when compared to the Argonne, the “Wilderness in which Grant and Lee fought [a Civil War battle that resulted in over 28,000 casualties] was a park.” 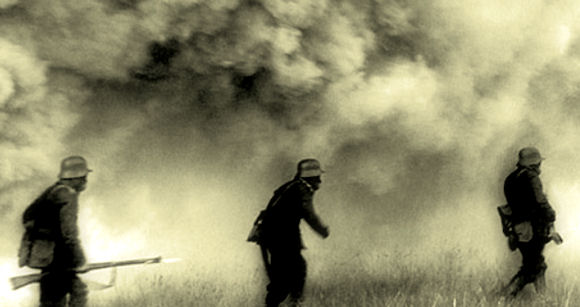 Germans facing the American/French advance may have been determined – although morale was rapidly dropping as Germany’s fortunes faded – but they were hardly strong.  The terrain was exceptionally well-suited for defensive operations but the first line of German defenses at Meuse-Argonne held only 3,300 men and these units were at 50% capacity as the Spring Offensive and Allied counterattack bled out the German army.  The Germans rushed six divisions to the Argonne in response, part of an estimated 450,000 German troops that would launch their own offensive.  On September 29th, 1918, the Germans threw the Prussian historical division the 5th Guards and another division at the American 35th Division and virtually destroyed it.  The 35th, which included Harry Truman’s Battery D, 129th Field Artillery, had run out of food and ammo while on the offensive – a common occurrence as Americans struggled how to transport and resupply their men.

The Americans had tasted hardship for the first time in the war, and experienced the sort of bloodletting that had worn down the morale of each combatant nation.  But the Meuse-Argonne Offensive was far from over.

* 26,227 Americans would be killed during the Meuse-Argonne Offensive, more than the Battle of the Bulge (19,276) or Okinawa (20,195).  By total American casualties, the Normandy campaign is the largest in American history, but the campaign took place over 11 weeks versus Meuse-Argonne’s 47 days.