When we last talked about Ryan WInkler, he was on his way to Belgium, in as much disgrace as the media ever allows a DFL golden child to face, after having called SCOTUS justice Clarence Thomas an “Uncle Tom”.   Winkler – who got a degree at Harvard – claimed he wasn’t aware of the history of the term.  But no matter; he took a break.

But he’s baaaaack, and running for Attorney General.

And this oughtta be a great campaign; he’s got the same Twitter smarts as the President seems to have:

Our old friend Chad the Elder of the late, great Fraters stepped up, with results that, if you know Winkler, are utterly predictable: 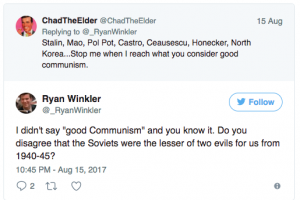 He wants to be attorney general.

This oughtta be a fun campaign.

10 thoughts on “The Return Of Eddie Haskell”