The other, I noted the hilarious-yet-grim irony of Betsy Hodges, mayor (for now) of Minneapolis, whiich is by far the most violent city in Minnesota, lecturing the state on “gun safety” and “violence”. 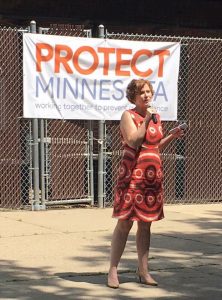 In recent years, as crime in the state at large has plummetted (and the number of law-abiding citizens with carry permits has skyrocketed), crime in Minneapolis is getting worse.

Nonetheless, the gun control movement (once thier serial lies are revealed) carries on trying to convince the undecided that

We address the former quite frequently on this blog.  The latter point takes a little more patience, but it’s out there.

Last year, I pointed out the laughably sparse turnout at “Protect” MN and Moms Want Action events in Eagan and on the mean streets by the Stone Arch Bridge by the Guthrie.

Look at the photo of Mayor Hodges, above, standing in front of the banner wearing a dress made from a tablecloth salvaged from an old “Chi-Chis” restaurant.  Interesting angle, no?

Here’s the view from behind Her Honor, toward the, ahem, crowd.

25 people, not counting the cop.  And four of them are affiliated with “Protect” MN and Moms Want Action.  And the “rally” is in North Minneapolis, sort of – but the crowd, almost to a person, has that “south Minneapolis” look about them; the ELCA hair,