Minnesota’s anti-gun orcs – “Protect” MN, Moms Want Action, and the ELCA – are claiming victory today; the legislative session has ended without two very useful Second Amendment bills even getting to the floor.

The claims is both a lie and, sadly, disapointingly, depressingly true. 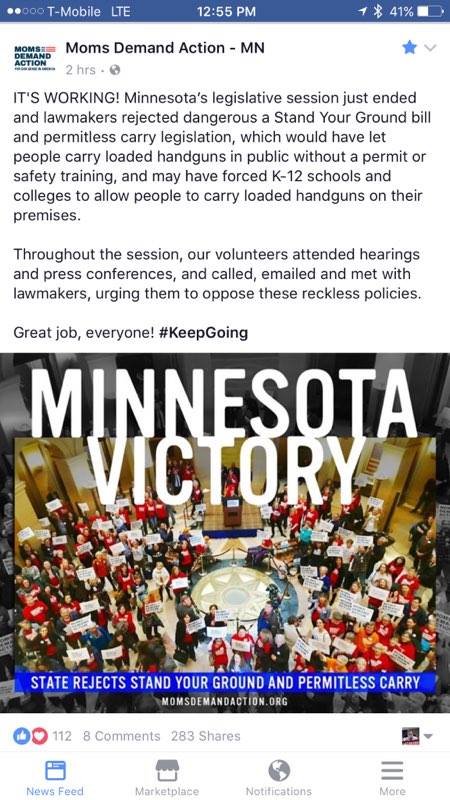 Delusions Of Vigor:  Moms Want Action came out bright and early, claiming credit, a mandate, and a groundswell of support for its “keep the cirminals safe” agenda.

“No Minnesota gun control group has ever made, nor will they ever make, a statement of fact that is simultaneously

And do you think that is still the case?

The “state” didn’t reject self-defense reform (AKA “Stand your Ground”) or Constitutional Carry.  Indeed, the State as a whole elected a bipartisan majority that would likely have passed Self-Defense Reform; Constitutional Carry might have needed a few more years, but then that’s how reforms happen; sometimes they take sustained effort and patience.

So “the state” rejected nothing.  Either did the Legislature.

And while Minnesota’s Real American groups fully expected Governor Flint-Smith  to veto both bills – setting up an epic talking point for the 2018 gubernatorial election – it never came to that.

Cave-In, Collapse, Abdication, Capitulation:  Minnesota’s GOP leadership – which controls both chambers of the Legislature, albeit by a razor-thin one-vote majority in the Senate – opted not to let either of the bills out of committee.

They did the governor’s job for her.  They – especially Gazelka and Limmer – gundecked both bills at the beginning of the session.

Limmer’s stated reason?  He wanted to protect his freshmen (from an election that is three and a half years away, no less).

Which makes sense, except he went full steam ahead on a bunch of abortion bills that will bring down the wrath of the leftist goddesses on them anyway!

Nobody was “protected” from anything!

So no.  Moms Want Action and “Protect” MN didn’t “win” anything (although claiming credit for other peoples’ flubs is Politics On The Cheap 101).

This is Green on Green.  An “own goal”.  A shot on our own basket.  Fratricide.

A stab in the back.

Time To Get Serious:  The MN GOP House Leadership apparently thinks that Minnesota’s shooters are toothless.   And let’s be honest; when we don’t see a direct threat to our rights right in front of us, we kind of are.  We get complacent.   We figure we’re good.

Michael Bloomberg is pumping seven figures into criminal-protection efforts in Minnesota alone.  The criminal-protection groups look comical, with their sanctimonious babble and their ELCA hair and their legions of constipated Crocus Hill biddies parading around their tony neighborhoods in their orange shirts pretending to care about the lives of people in The Neighborhood – and they are.  But they are building numbers, and have gotten their big-money masters to yank the Strib’s leash back into line, and as dim and iill-informed and comical as they are, they’ve got money and the biggest megaphone in the state.

All we, the little guys, have is passion, numbers and the truth.  Which isn’t enough unless we used all three, every bloody day.  Because if we’re not advancing, they are.

So call the Big Three. 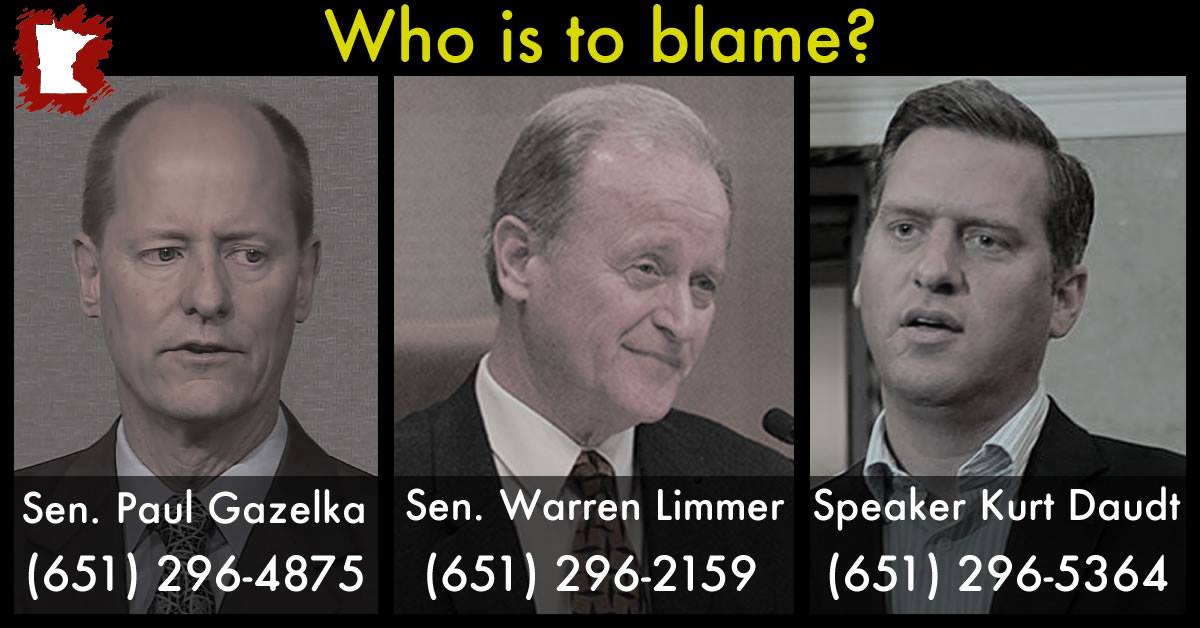 And if Kurt Daudt tries to fob the blame off on the Senate, please ask  him – why does the Senate control the House’s agenda?

Two decades ago, I left the GOP in part because the GOP on the national level took Real Americans’ votes for granted.

And I’m not going anywhere this time.