On Tuesday and yesterday, we discussed “Protect” Minnesota’s factually vacuous response to the House’s Constitutional Carry bill – which would allow people who are otherwise entitled to carry firearms to do so without having to jump through hoops.

Today, we’ll shift the focus to “Protect”‘s response to the self-defense reform bill – which The Reverend Nancy Nord Bence refers to as “stand your ground”, because the left and media paid a lot of good money to try to stigmatize that term after the Trayvon Martin episode, of which more later.

Field Marshal Of The Legion Of Invincible Ignorance:  I keep thinking I’ve found the Reverend Nord Bence’s dumbest lie of the lot.  I keep finding worse ones.  But this one may be the bottom of the barrel:

The Stand Your Ground bill (HF0238) would change Minnesota’s existing authorized use of force law by removing the obligation to retreat from danger before using deadly force. If passed, it would be admissible to use deadly force any place and anytime a person subjectively believed their life to be threatened, except against peace officers.

This part is actually true – not that it does Nord Bence’s larger point any good.

The presumption of innocence would be given to the shooter, while burden of proof for prosecution would be with the state. This is the law in Florida that enabled George Zimmerman to get away with the murder of Trayvon Martin.

It’s only two sentences – but they are steeped to saturation in ignorance and untruth. 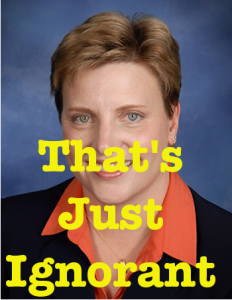 Reverend: Please read the Fifth Amendment. Get back to us. Thanks.

Read the Fifth Amendment.  The accused always have a presumption of innocence!  The burden of proof is supposed to be with the state!

One wonders if the Reverend truly doesn’t know this – or if she is aiming on purpose for the dumb and illl-informed.

Minnesota currently allows individuals to use deadly force in self-defense, which is appropriate. But it’s an objective standard.

That is 180 degrees removed from correct.  It is subjective!

It’s called the “Reasonable Person” standard; would a “reasonable person” – or 12 of them on a jury, as Joel Rosenberg explained it – believe that you were in immediate danger of death or great bodily harm?   That was a start; those same reasonable people had to believe you also used lethal force appropriately, and weren’t taking part in a fight you were willingly part of.

…and it’s anything but objective.

You have to be able to show you actually were in danger and that you tried to retreat before resorting to deadly force. This bill removes the obligation to retreat and specifically gives the presumption of innocence to the shooter.

No.  The Constitution does.

The bill merely means that a prosecutor can’t try to hold an arbitrary, subjective definition of “retreating” against someone who is otherwise legitimately defending their life.

This is a major change in our understanding of what it means to defend yourself, a completely subjective standard.

Well, the Reverend Nord Bence is close to a point.  If she and her followers were to learn the current law and what the bill would actually do, it’d be a major change in their understanding, all right.

Is that what we want for Minnesota?

You’re a 120 pound woman who works at a shopping mall.  As you walk to your car, a man approaches you, draws a knife, and says “Bitch, get in the car”.  As he steps to grab you, you draw a handgun and shoot him.  He bleeds out as you wait for the police.

A decision you made in a fraction of a second ended one life – perhaps justly – and has just changed yours forever; as the late Joel Rosenberg said, you’ve just dropped a nuclear bomb into your life.

The county attorney will look at the evidence, and weigh it against the statute and, in Minnesota, a lot of case law.

That is why we need this law.

8 thoughts on “The Gang That Couldn’t Not Shoot, Straight, Part IV: I Don’t Think That Word Means What The Rev. Nancy Nord Bence Thinks It Means”