Night had only begun to settle over Gaza for the ANZAC Mounted Division on March 26th, 1917.  The division, part of a 22,000-man operation to build upon the British victory at Romani in the summer of 1916, had accomplished its objective of defending the main advance of British infantry against any Ottoman counterattack.  Only 12 hours into the offensive, Gaza had been effectively surrounded, and by dusk, units such like the Mounted Division had even captured outlying portions of the city.

Despite the ferocity of some of the German-led Ottoman counterattacks, the Commonwealth units held their ground.  The British infantry had captured the hill of Ali al Muntar, overlooking the rest of Gaza, while holding over 460 German and Ottoman prisoners, including a divisional commanding general.  The British held the high ground and all the access points to the city.  The campaign for Palestine might be over before it even started.

Instead, the ANZAC Mounted Division – along with the entire defensive screen of forces – were told to retreat.  The threat of 12,000 Ottoman soldiers to the battle’s east had been deemed too great a threat to the British supply lines.  Rather than risk a fight, the Egyptian Expeditionary Force (EEF) command chose to disengage.  The irate men of the Mounted Division cursed that “victory [had been] snatched away from them by the order to withdraw.”

In addition to the elements and the Ottomans, Britain would have to confront its own generals in the Middle East.

With revolution in Russia, and strategic inertia in France, the Middle East appeared to be the only front that saw the armies of the Entente victorious at the start of 1917.

Following the debacle at Kut, a joint British/Indian army had successfully marched to Baghdad by the spring of 1917, putting a practical end to the Mesopotamian campaign with the capture of the city in early March.  And the Arab Revolt of the summer of 1916 had managed to drive the Ottomans out of a series of coastal towns dotting the Red Sea, while sowing rebellion among the various tribes of Arabia.

Yet these campaigns, while providing much need victories for a war-weary Entente, had proved themselves to be little more than costly distractions.  The Arab Revolt had to be completely underwritten by London, and (thus far) hadn’t been able to win without British support.  Baghdad had been the first prominent capital within the Central Powers to fall, but the operation had required over 800,000 men with 250,000 casualties – and the Ottomans looked no closer to surrender as a result. 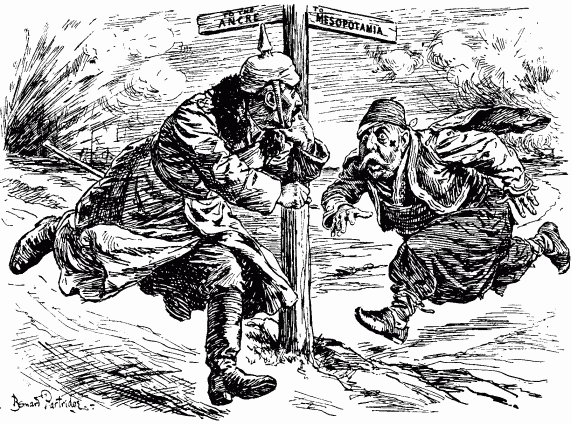 A British op-ed – the Germans run from Ancre (a battle of the Somme that caused 45,000 German casualties) and the Turks are running from Mesopotamia.  Both were Central Powers defeats (although the larger Battle of the Somme was inconclusive with more Entente casualties) but neither changed the strategic direction of the war

Victory in Palestine appeared to be possible to purchase for far less.

From the battle of Romani through the fall of 1916, Britain’s hold on the Sinai had been further consolidated at a minimal cost in lives and materials.  Increasingly, the battles of the desert were being fought less by soldiers and more by engineers building railways and pilots bombing infrastructure.  The war on the Sinai/Palestine border had become a contest of maneuvers rather than battles, as both sides attempted to flank the other while trying to avoid direct engagements.

It was a contest that had slowly turned to favor the British.  Initially the Ottomans, armed with German-made aircraft and relying on camel-based units (instead of the horse-based cavalry of the British), had far better reconnaissance tools at their disposal.  But following several German-Ottoman air attacks on the Suez Canal and Cairo, the British Royal Flying Corps, the precursor to the RAF, soon began to prioritize the Sinai en route to achieving air superiority.  The Ottoman forward base in Sinai, at Magdhaba, would be pounded with 20-pound and 100-pound bombs, as the RFC chased the German-Ottoman aerodromes wherever they could find them. Turkish and German air crews – the picture isn’t from Palestine, but the Ottoman Empire originally held the stronger force in the air

The British weren’t just winning in the air; they were out-producing the Ottomans on the ground.  By early 1917, 388 miles of railway, 203 miles of metalled road, 86 miles of wire and brushwood roads and 300 miles of water pipeline had been built.  Nearly 18 million gallons of water were now available thanks to the piped wells and reservoirs on the Sinai/Palestine border – all valuable for any staging invasion force.

At the same time, the last of the Ottoman positions in the Sinai had fallen as the British took Rafa.  For the loss of 500 casualties, the British had routed the Ottomans, killing or capturing nearly 2,000 men.  The Ottomans were forced to relocate to Beersheba, deep within Palestine, while under constant aerial pressure.  The fighting spirit of the Ottomans appeared to be bent, if not broken, and “Johnny Turk” had become a source of sympathy even among the average British soldiers.  Anecdotes from the desert told of abandoned or lost Ottomans units dying of thirst being given water and food by the British forces that happened upon them, rather than fighting them.

With the capture of Rafa, Gaza was within 5-6 hours by foot.  Eager for easy victories, and emboldened by the capture of Baghdad, David Lloyd George pressed his commanders to strike into Palestine, ideally to capture Jerusalem.  Britain’s military command wasn’t as confident.

Gen. Archibald Murray – he would be relieved after several failed attempts at Gaza. Ultimately, he would be more remembered as being negatively portrayed in “Lawrence of Arabia”

Gen. Archibald Murray had been an exceedingly thorough commander of the British forces in Egypt, and deserved great credit for building up the military infrastructure of the Sinai.  But Murray had arrived as the head of the Egyptian Expeditionary Force after what can only be described as a nervous breakdown in France in 1914.  Murray had panicked during the British retreats early in the war, and had to be sedated after repeatedly fainting on the job.  Strangely enough, Murray was promoted to become the Chief of the Imperial Staff, a job he surprisingly excelled at doing before a series of changes in command forced him out.  Murray had been a strong proponent of focusing on the Western front, viewing the Middle East as a sideshow theater of war.

Despite Murray’s reservations about going on the offensive in Palestine, “Old Archie,” as he was known, would follow his orders.  His caution would prove to be every bit the opponent as the Ottomans.

Fog enveloped the battlefield in the early hours of March 26th, 1917.  By the time daylight had broken, men couldn’t see more than 20 yards in any direction, making both ground and aerial intelligence all but impossible.  The British had reconnoitered Gaza repeatedly, and felt confident that the city only had a garrison of around 3-4,000 men.  But where were the Ottoman reinforcements?  Beersheba?  Jerusalem?  The desert east of Gaza held many places the Turks could lie in wait.

Murray’s 22,000 man force had been divided with the cavalry units acting as a screen while the infantry was charged with taking Gaza itself.  The division of labor allowed the British to quickly surrounded Gaza, but also made a large number of men essentially inactive for the offensive – waiting for a counterattack that might or might not land in their sector.  Worse, communication between units had broken down by mid-day.  Artillery barrages hit sections of the front long abandoned by the Ottomans. Some British units sat in place while command was often unaware of the status of the progress being made.

German General Friedrich Freiherr Kress von Kressenstein had anticipated the line of attack, moving 12,000 of his 16,000 available men to the east of Gaza to threaten the British rear.  By shear luck, von Kressenstein’s aircraft had spotted the advancing British invasion through a break in the fog.  Now, von Kressenstein’s 12,000 men were hitting Murray’s robust eastern defenses which were at near parity with the German’s forces.  By the late afternoon, the various Mounted Divisions of the British attack had halted any Ottoman effort to relieve Gaza or cut-off the British supply lines.

By nightfall, Gaza looked on the verge of surrender.  British casualties among the infantry had been high, but they had managed to fight their way into the city and capture several key strategic points.  Von Kressenstein was so alarmed by the British progress he instructed Gaza’s defenders to fight “to the last man.”   Gaza would not fall on March 26th, but it didn’t look likely to endure much longer either.

The surviving Turks at Gaza.  The Ottomans gained confidence from the victory, but the reality was they only escaped defeat due to British timidity and confusion

Murray disagreed.  Unwilling to risk being flanked, Murray ordered an immediate retreat.  From his command office, Murray had little information on the status of the offensive.  All he knew for sure was that a number of units had fallen out of communication and that the Turks were threatening his right.  Despite the 18 million gallons of water available at the front, getting it to their men have proved to be difficult – most of the Mounted Divisions were short of water as horses died and men risked sunstroke.  For the loss of 3,900 men, Murray had only inflicted 1,600 Ottoman casualties and surrendered the ground he gained.

The first battle of Gaza had turned a British victory into a British defeat.  And Murray would compound the problem by lying about it.

“The operation was most successful, and owing to the fog and waterless nature of the country round Gaza just fell short of a complete disaster to the enemy,” Murray wrote London.  In Murray’s report, the Egyptian Expeditionary Force had encountered a similarly-sized army and driven it from the field with “heavy losses.”  In the words of one of Murray’s subordinates, Gaza was a “brilliant victory.”

Ottoman soldiers stand over British prisoners.  The Turks would taunt the British later: “You beat us at communiqués [meaning press coverage], but we beat you at Gaza.”

The War Office was ecstatic.  The Chief of the Imperial General Staff William Robertson, who had replaced Murray, ordered an immediate offensive against Jerusalem.  Murray had to confess that despite his “victory”, Gaza remained under Ottoman control.  There would be no advance on Jerusalem.  The British press and public, which had heralded the battle, were now furious that London had seemingly once again lied about the progress of the war.  Murray hadn’t merely stained his own reputation, but strained the fraying trust between Britain’s public, politicians and generals.

Bolstered by more men, tanks and even poison gas shells, Murray would attempt to make amends for Gaza just weeks later.  If Murray had been overly cautious at the first battle of Gaza, he was recklessly indifferent to losses at the second battle.  The British would lose 6,300 men and the ability to stay on the offensive.  For most of the rest of 1917, the British and Ottomans would be stalemated in the Middle East.  There would be no “cheap” victories in Palestine.

1 thought on “The “Brilliant Victory””