After spending a few weeks going full-blown fanboy over the Pillsbury Foundation/Bloomberg Youth’s “gun buyback” last weekend, the leftymedia has its feelings hurt by the mockery the conservative alternative media (including this blog) has heaped on the “events”.

The piece, by the inevitable Corey Zurowski, is entitled “Gun fans mock Minneapolis’ buyback program over crude homemade shotgun” – after the shotgun that our Joe Doakes noted at one of the buybacks. 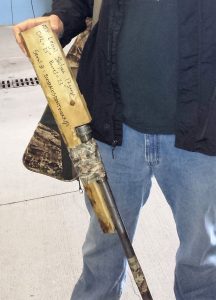 Oh, we mock the buybacks for a lot more reasons that that.

We mock the buybacks because they don’t affect crime. Never have, never will.

They didn’t take any guns “off the street”; virtually all the people turning in guns were middle-aged folks from the surrounding area who were trading junk guns for more in gift cards than they’d ever get from a buyer.

We mocked the bald-faced graft – the transfer of money from Pillsbury Foundation donors and Minneapolis taxpayers (via the dozen or so cops that were working the “events”) to – let’s be charitable – “artists”, as well as enterprising rummage-salers.

We mocked the media (smile, Corey Z!) for their unability or unwilingness to dig past the press releases; at both buybacks they ran out of gift cards after *maybe* 10-15 guns were turned in. If the buyback “bought” more than 30 guns, no witness can confirm it. Most of the guns were garbage that were “donated”, AKA “thrown away” at the buyback.

The shotguns *was* functional – just go google “Slamfire Shotgun”; you can do it yourself. The homemade shotgun was a prank, a joke played at the (literal) expense of the smug, sanctimonious, ELCA-haired dreamsicles running the events – but probably the LEAST mock-worthy part of the event.

Oh, and we mock Corey Zurowski as a “reporter”;  in the caption of the photo of the homemade-yet-parodic shotgun ,he sniffed “Gun fans allege this primitive weapon was turned in a Minneapolis’ buyback event. There’s just no evidence that it actually happened.” 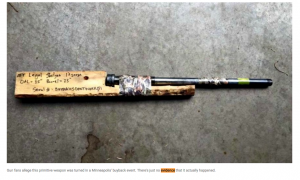 But then, in the final paragraph of his own article, Zurowski carries a quote from the Minneapolis police’s public relations officer: “The gun in question was turned in,” says Minneapolis police spokeswoman Catherine Micheal. “Our people inspected it, found out it was operable, however crude the construction, and that’s why it was accepted.”

So yeah, we do some mocking there, too.