The Betsy “The Besty!” Hodges regime in Minneapolis held a gun buyback (via the Pillsbury Foundation, a non-profit that is part of the DFL family in Minneapolis) over the weekend.

I originally intended to attend – but other events caught up with me on Saturday morning.

I am standing in the rain at Fire Station 17 on South 38th Street, waiting for the Pillsbury-sponsored Minneapolis gun buy-back to begin. The firemen are here but nobody else in authority.  There are six cars of middle-aged white people waiting to sell their guns.  A cop just pulled up.  We must be getting started.

Finally getting started.  I’m sixth in line (technically seventh: a woman in a wheelchair and her husband are front of me but I’m counting them as one Seller).   There are about 15 people in line behind me, all middle-aged White people. 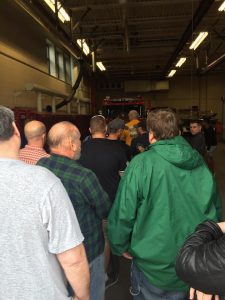 They’re out of money.  I turned in three pistols (limit three per customer), the Range Officer approved me for payment, but the Community Service Officer doesn’t have enough gift cards.  They ran out.  The cop in charge is on the phone calling for more gift  cards.  Or, if you want to go, just leave your guns as a voluntary donation.  No takers for that offer.

Cops just announced the gift cards are on the way, be here in an hour.  Those of us who already turned in our weapons can leave our name and number and can pick up our gift cards in an hour.  Everybody else in line hang on, they’re not buying more weapons until they get the money sorted out.  Or you can leave them for free. About two dozen middle-aged, middle-class White people in line holding various gun cases.  I think I’ll work the line to see what others are selling.

Still no gift cards and the cops are not sure when – or – if more cards are coming.  In response to complaints, the cops now are saying that the program was advertised “quantities are limited” so it’s not their fault they were overwhelmed by demand and ran out of gift cards.  But this event is scheduled to run from 10:00 am to 6:00 pm and held at two locations . . . how many people did you think would respond?   I was the SIXTH customer and I didn’t get paid.  You only budgeted enough for FIVE customers?  Seriously?

Just scored a sweet deal on a classic rifle.  A woman joined the line – now halfway down the driveway – with her husband and daughter, all holding long-gun cases.  An aunt died and left them.  One is a Remington .22 LR bolt-action single shot, almost identical to the one my Dad taught me to shoot, and it’s in great shape.  I offered her $100 which was exactly what the buy-back would pay, if they ever got more cards, if quantities weren’t limited, if she wanted to wait.  She took it.  We’re both pleased.  Another gun off the mean streets of south Minneapolis.  I’ll all sleep safer tonight.

The cops have taken down the sign and are closing the doors.  The buy-back is over, six hours early.  They’re out of money and aren’t getting more.  The cop in charge promised that everybody inside the fire station would get gift cards in the mail, just leave us your name, address and phone number (that whole anonymity thing?  Forget about that if you want your money.  Or you can leave your guns for free).  What do I care, I’m legally in possession of the weapons and they haven’t been used in any crimes so sure, here’s my name and address.  Send me my cards in the mail.

What a complete and pathetic joke.  This is how we fight crime?  No wonder it’s a tidal wave.  One cop in uniform running the show, three cops wearing Range Officer shirts making sure the weapons are safe, two Community Service Officers handling the money plus one young man wearing a similar shirt taking photos of the guns turned in, might have been a PR guy, all working on a Saturday?  The staff cost more than the guns.

Everybody in line was annoyed.  Started late, ran out early, promised resupply never arrived, scrambling for paper to take addresses for mailed cards, chaos from start to finish.  Total number of firearms collected could not have exceeded six dozen and based on the ones I saw, they all were junk and all were sold by people who weren’t likely to commit a crime with them anyway.  You could have gotten more guns by randomly stopping cars in North Minneapolis twelve hours from now, and taken them from people who posed a more serious danger to society – the people riding around in cars after midnight with guns in their hands and trouble on their minds.

If any private business ran itself this way, the Attorney General would be all over them for Deceptive Trade Practices which is a vile form of Consumer Fraud.  Not surprising to see Liberal Gun Banners acting like this but I felt sorry for the cops who got sucked into playing a part in the charade.  As I was standing in line waiting for payment, I commented to one of the Range Officers “Good thing you’re getting guns away from these middle-aged White people. North Minneapolis will be a lot quieter from now on” and he grimaced in reply “Yeah, well, I can’t comment on that.”   They know it’s a crock.  But if the brass wants PR, at least the overtime is good.

Best of all, I met a buddy in line.  He was hoping to sell his shotgun for the promised $100 – hey, it’s a single-shot 12 gauge pump-action with serial number and the camo duct tape makes it “tactical.” 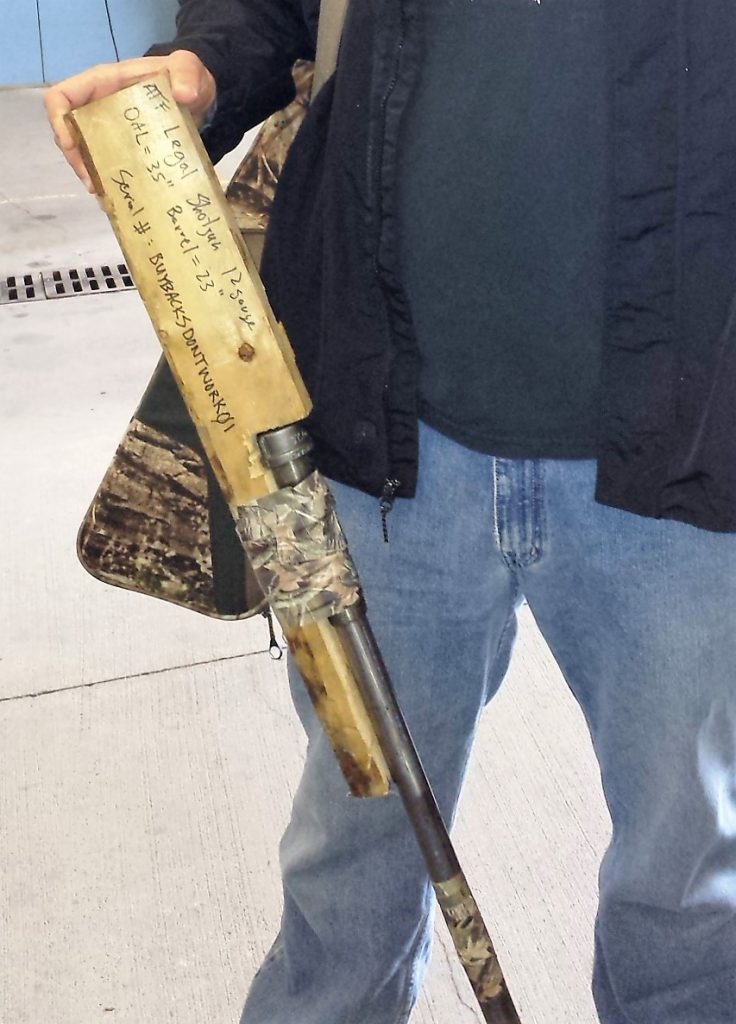 I wonder if they paid off?

Apparently the Pillsbury Foundation doesn’t want that  much “art“.

The Magical Number!:  Another attendee at the South Minneapolis location – like Doakes, a Twin Cities attorney – writes:

I’d say more than five [people got their guns purchased by the buyback] but less than 10. There was a three gun limit that wasn’t enforced so there were a couple people at the front that brought in more than three.

The cop in full uniform said he thought they brought a couple thousand [dollars] in gift cards to start off with.

Even if it was 3,000 that’s only enough for 15 handguns. Totally inadequate.

If we assume these two attorneys’ accounts are accurate (and I do), then the Star Tribune claim that the buy-backs “took 150 guns off the street” – indicates to me that the Strib’s writer, Liz Sawyer, took the number from the Pillsbury Foundation’s press release without asking any questions.

And further evidence Ms. Sawyer has some learning to do about this issue (emphasis added):

Long after the buyback closed, a Brainerd man stood nearby with a cardboard sign reading “Will Pay More 4 Guns.” He said he was hoping to buy some antique weapons with historical value. He typically only asks sellers for an ID and their permit to carry.

And right there, Sawyer and the Strib play into the hysteria, and prove they don’t know what they’re talking about.

The permit means they have a clean criminal record.  You have to prove you have a clean record to get the permit in the first place.

But I’ll cut Sawyer some slack, if only for this quote:

Others criticized the event for failing to attract the kind of firearms typically used in shootings. “There are police here,” said Phillip Murphy, owner of a North Side flower shop. “The bad guys know that and aren’t coming.”

Well, duh.  Gun buybacks are to street crime what the TSA line is to hijackings; theater to make you think something is being done.  It’s like the people in the dreamsicle shirts with their sanctimonious rallies far from where the violence is; giving old, hacked-out guns to “artists” just makes people in the non-profit community feel better about ignoring all those dead black people.