The men of the British 2nd Light Horse Brigade welcomed the setting sun on the night of August 3rd, 1916.  Stationed at the small Egyptian town of Romani in the Sinai, the men had been forced to contend with the unforgiving elements of the desert more than their Ottoman opponents for months.  The few wells and vast distances between towns or outposts exacerbated the effects of the 120-degree temperatures, which took their toll on the Brigade’s men and horses.  Wrapping up their daily patrol in the cool desert night was a refreshing change of pace.

The night-time patrols had been deemed necessary as the Ottoman presence near Romani, only 23 miles from the Suez Canal, had slowly increased.  But since the Ottoman raid against the Suez in January of 1915, what little fighting had occurred in the Sinai had been done as minor raiding parties by either side.  Other than the disastrous Turkish invasion of Sarikamish early in the war, the Ottoman Empire had been almost exclusively on the defensive.  The threat of a large-scale Turkish offensive seemed little more than another desert-fueled illusion.

The sounds of gunfire and artillery as the night of August 3rd became the early morning of August 4th confirmed the fears of the Brigade’s commanders.  8,000 troops – the vanguard of a mixture of 16,000 Ottomans, Germans and Austro-Hungarians threw themselves against the light horsemen.  The strength of the Central Powers in the Middle East was about to reach its zenith.

Members of a captured Turkish ambulance at Romani. The battle would be the Central Powers’ attempt to gain the upper hand in the Sinai and Egypt

For all of the strategic importance of the Suez Canal – its construction had reduced the journey between Bombay and London by nearly half, facilitating trade that rapidly grown Britain’s economy – neither Britain nor the Ottoman Empire had prioritized efforts to defend or occupy the Sinai.  Instead, the significant battles for control of the Middle East had thus far occurred in the Bosphorus and Mesopotamia.

Both the British and Ottoman Empires had seemingly preferred to outsource the fate of Egypt and the Sinai Peninsula to tribal allies.  The Turks had attempted to co-opt the Senussi in Libya for a generally ill-conceived Egyptian uprising in the winter of 1915/16.  The British effort to enlist Arab rebels had only just begun, but both sides had discovered that without significant advisory support, their tribal allies were at best left to harassing the enemy.

For more than a year and a half, the Great War in the Sinai had been reduced to competing efforts to build infrastructure.  While the Sinai was technically part of Britain’s Egyptian Protectorate, what little military and police forces had occupied the region were abandoned upon Turkey’s entry into the war.  Instead, scouting parties had occasionally clashed as both sides dug wells and built rail-lines amid the scorching sand. 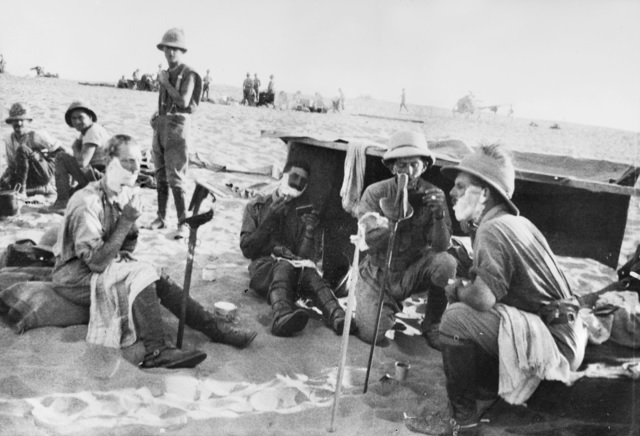 An Australian unit relaxes in the Sinai.  The region was a backwater battlefield with both the British and Turks holding various sections without much conflict

The frequency and intensity of these clashes had grown since the spring of 1916.  What had previously been small-scale fights between British and Ottoman cavalry/camel units were now actual battles.  Britain’s loss of 500 men at the battle of Katia that April shifted the Entente’s focus.  Due to the vast distances in the desert, the lack of on-the-ground intelligence, and Ottoman parity in the air (the Turks actually managed to bomb the Suez Canal on several occasions), the British had been largely unaware that an estimated 42,000 Ottoman, German and Austro-Hungarian troops had been transferred to the Palestine/Sinai border.  Only by July had the British realized the scale of the Central Powers-led forces lined against them.

German General Friedrich Freiherr Kress von Kressenstein had been obsessed with crossing the Suez Canal since his appointment as the Ottoman Fourth Army commander at the start of the war.

Despite tepid support from Otto Liman von Sanders, the head of Germany’s military mission to the Ottoman Empire, von Kressenstein had orchestrated the assault against the Canal in 1915.  For 160 British casualties, 1,500 Turks had been killed, wounded or captured.  Defeat hadn’t lessened von Kressenstein’s appetite to strike at Suez as he led 16,000 men in another offensive through Sinai – only his objectives had changed.  Instead of the far-flung goal of seizing Suez, von Kressenstein would capture Romani.  With it’s proximity to the Canal, the Ottomans could effectively shutdown the shipping lane by exposing ships to long-range artillery fire.

The Ottoman Air Force – pictured with the German-made Albatros D.III (not yet produced by the time of Romani). The German/Ottoman air force was actually the superior force in the Middle East during the early years of the war

Von Kressenstein had planned the Romani operation for months, preferring to use experienced German troops as the spear of the offensive.  The Ottomans would hold the center of the attack, potentially taking the brunt of the casualties, while German troops outflanked the enemy.  If the British light horsemen stood their ground, von Kressenstein’s Austro-Hungarian artillery would push them aside.

Throughout the early morning hours of August 4th, 1916, the Central Powers had groped to find the flanks of the Light Horse Brigades.  Ottoman and German machine guns had managed to pin the Brigades down, but the Austro-Hungarian led artillery was failing to dislodge them.  The soft sands of Romani cushioned the shrapnel-laden shells, limiting their destructive effect.  To make matters worse, the Light Horse Brigades had brought their own horse-drawn artillery to the battle.  British light artillery was now dueling with the heavier guns from the Dual Monarchy.

By mid-day, the Light Horse Brigades had withdrawn under the cover of an ANZAC Mounted Division whose heavy artillery slowed the German and Ottoman advance.  Cut-off from being able to resupply their dwindling water reserves, the Central Powers attempted to break through the British line with a last-ditch air campaign.  German and Ottoman biplanes flew unopposed over Romani, dropping targeted bombs on the ANZAC artillery and frontline.  The British, supported by their Australian and New Zealand ANZACs, refused to budge.  The Germans and Ottomans held part of Romani, and could hit incoming rail traffic, but had gained only modest ground before losing the element of surprise.

A New Zealand cavalryman is forced to abandon his wounded horse. The desert climate was poorly suited for cavalry units

Von Kressenstein’s forces had been spread out all over Romani as they attempted to turn the flanks of the British.  But where the German and Ottoman troops had tried to flank their opponents, the British and ANZACs had preferred to engage with frontal assaults.  Thus, as von Kressenstein’s men tried to get behind the enemy lines, they were drawn into protracted battles. Those same battle lines at Romani were now hardening with prepared positions being dug while the nearest water sources were safely within British control.  The months of infrastructure building had favored the British – they were able to bring up their reserves with incredible speed and turned an outpost force of a few thousand into an army of 50,000 within a little over a day.  Von Kressenstein’s army was exhausted and now outnumbered.  They had lost over 9,000 men, including 4,000 taken prisoner.  And now if they didn’t retreat quickly, they were in danger of losing their entire force.

But the British, who had reacted so quickly to the initial invasion, now lumbered when it came to the pursuit.  Units inexperienced to desert combat succumb to the elements or became lost amid in the dunes.  The tactics that had succeed at stopping the Central Powers’ advance – engaging enemy units with frontal assaults – now favored von Kressenstein’s retreat.  Instead of flanking the German/Ottoman line, the British forces attempted to slowly squeeze von Kressenstein out of Sinai.  He was more than happy to oblige and by August 12th, his army was back to where it had started, reinforced with the rest of the Ottoman Empire’s Palestine-based units.

In addition to the lost lives of their men, the Central Powers’ invasion of Sinai cost them a great deal of newly produced equipment.  The Ottomans would be forced to continue to rely upon more antiquated weaponry

The British celebrated their victory with rhetorical flourish, stating the battle was “the first decisive victory attained by British Land Forces”, apparently forgetting their own victories against the Ottomans before Kut.

But the victory was significant.  The planning for Romani had represented a high-water mark for the Ottoman Army’s confidence.  Despite their defeats at the hands of the Russians, the Turks had been repeatedly defeating the British, albeit while on the defensive.  Romani had been a serious effort by a joint Central Powers force to tip the balance of power in the Sinai.  The operation had cost them experienced German troops and large quantities of weapons built for desert warfare – all for a few days of battles and a little over 1,000 British casualties.  The army left in Palestine was still sizable, but the desire to again take the offensive had been bled out of them.

The battle for Sinai was over.  The campaign for Gaza – and much bloodier days for both sides – was soon to come.