Some of us on the Right obsess about legal theories, which makes normal people’s eyes glaze over.  But the legal theories courts use make a difference not only in the present case, but in future cases where the theory is accepted as legitimate precedent.

A job requirement which appears innocent on its face, but which disqualifies an unusually high percentage of certain historically disadvantaged groups, is said to have a “disparate impact” and therefore constitutes unconstitutional discrimination.

For example, the job requirement that firefighters must be able to drag a heavy weight a long distance eliminates most female applicants.  In order for the job requirement to remain, the employer must show that dragging a heavy weight a long distance is a legitimate job requirement (it is, as you know if you’ve ever tried to handle a charged fire hose, much less lug an unconscious victim out the window of a burning building, down a ladder and across a lawn to safety).  There is no “team lift” on a ladder – you carry the victim or leave him to die.

Plaintiff’s lawyers love the legal theory of “disparate impact” because it doesn’t require proof intent to discriminate, only proof of unequal results.  The theory has been stretched to apply to housing and lending and now, to school discipline.

Black parents complained that Black students are suspended at higher rates than other students (see chart below).  They claim the school’s discipline policies have a disparate impact on Black students and therefore constitute racial discrimination. 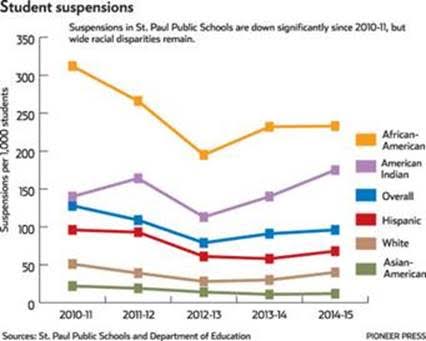 In response, St. Paul schools seem to have adopted a policy that Black students would not be suspended, even for repeated attacks on other students, faculty and staff.  Violent students quickly got the message: thugs won’t be punished, violence exploded, there is no discipline.

Recently, a St. Paul teacher was attacked by a student and suffered a concussion.  The teacher is suing the school for adopting policies that create an unsafe workplace and I wouldn’t be surprised if the teacher’s union strikes for workplace safety.

This is what happens when liberal judges let liberal plaintiffs impose liberal social values on society through litigation instead of education to pass legislation.  A theory that gave like-minded Liberals in the courtroom an excuse to impose social engineering is wreaking havoc in a classroom and nobody is accountable for the foreseeable consequences that are causing real damage to the next generation’s educational success.  Any parent that can afford to flee the system, has.  The only children left are those with nowhere to go and no way out.

And if you still have your kids in that plague-ship of a district, I gotta ask why.