The morning fog had lifted over the Atlantic, giving way to clear skies and calm seas.  120 miles southwest of Ireland, in open water, the RMS Lusitania was charting a fast, and direct, course for England on May 7th, 1915.  The ship had left New York just six days earlier, brimming with a passenger list that read as a “who’s who” of political, theatrical and financial dignitaries from Britain and America.  Many passengers were enjoying the warm, sun-swept decks as they awaited their arrival in Liverpool.

Also enjoying the sites was 18 year-old Leslie Morton, a lookout among the Lusitania‘s crew.  A commotion in the calm waters easily caught his eye; a foaming residue trail in the ocean.  Morton could barely shout out his warning, “torpedoes coming on the starboard side!” before the Lusitania was hit, just underneath her bridge.  Steel and water rocketed skyward.  Almost instantly, a second explosion, “a million ton hammer” struck the vessel.  Within four minutes, the boat had lost her engines, steering and all electric power.  All aboard understood what happened – the Lusitania was destined for the bottom of the ocean.

The scale of the loss of life wouldn’t be apparent right away, but 1,198 civilians drowned on the Lusitania

Of all the tactics the Germans had unleashed to try and turn the Great War to their advantage, unrestricted submarine warfare had been the most effective.

The Zeppelin raids had caused momentary panic in London, but then fairly quickly abated.  The horrors of the flamethrower or poison gas produced occasional battlefield victories, but were also becoming weapons in the hands of the Entente.  Despite the shock value of such weaponry, or the international condemnation of their use, nothing Germany had used before was capable of striking at the very heart of the Allied war effort. U-20 (second from the left) – the U-boat that sank the Lusitania. Its captain would be labeled a war criminal, and urban legends arose than even the U-boat’s crew objected to the sinking (they didn’t). Kapitänleutnant Walther Schwieger would not survive the war

The British naval blockade of Germany had already begun to take its toll, as Britain had declared early in the conflict that even food stuffs were “contraband” and thus illegal to ship to any of the Central Powers.  Coupled with man-power shortages to reap or plant crops (millions of German men were under arms), Germany was slowly starving to death.

Großadmiral Alfred von Tirpitz, head of the German Navy and last seen pushing for the Zeppelin campaign against Britain, had a solution – the U-boat. By a policy of unrestricted submarine warfare (sinking any vessel within a stated radius around England), the Germans could return Britain’s blockade in-kind.

A copy of a German Goetz metal for Lusitania – a satirical metal printed in Germany to vilify the British for the Lusitania sinking, the metal was copied by the British as evidence that the Germans were “honoring” the killing of civilians

But such a policy would also endanger neutral ships around England, and inevitably result in the loss of civilian lives. Chancellor Theobald von Bethmann Hollweg, who had been so eager to get his European War that he essentially committed treason to do so, was far less eager to risk angering a neutral power – especially the United States.

Fears of theoretical consequences were trumped by the fact that the German U-boats had thus far been a non-factor in the war.  Between August 1914 and February of 1915, the U-boat had sunk a total of 19 ships.  Given the go-ahead by Kaiser Wilhelm II to enforce Tirpitz’s unrestricted submarine campaign, the U-boats quickly were sinking nearly two ships a day. For Britain, an estimated 100 tons of supplies was being lost in the Atlantic every month.

Now it was Britain’s turn to face potential starvation.

With 1,198 dead, most of them British, mass graves were dug around Liverpool for those victims recovered

The fear of international outcry seemed to be overstated. Despite several high-profile sinkings, such as that of the Belgian relief ship Harpalyce or the RMS Falaba whose death toll included one American, Leon C. Thrasher, the United States hadn’t gone to war with Germany.  In fact, they hadn’t even rebuked them (Wilson nearly did over the death of Thrasher).  The British policy of disguising their ships under neutral flags brought more formal American protests than the German sinking of those vessels.

While the supposed heart of the debate was whether or not the British ships the Germans were targeting were military or civilian in nature, the reality was more about how the Germans were sinking ships than why.  Some U-boats were abiding to the gentlemanly “Cruiser rules” for the seizure of ships at sea – surfacing and alerting ships to their presence; giving them amble time to gather themselves into rowboats before their ship was sunk.  But the sinking of RMS Falaba showed the limitations of mercy.  While the Falaba was given time to off-load their passengers, they used the opportunity to radio British warships for help.  If forced to chose between the lives of enemy civilians and their own sailors, the U-boats would chose themselves every time. The passengers embarking on the Lusitania knew the potential danger.  Germany wouldn’t let them forget – publishing a written warning in 50 American newspapers and citing the Lusitania by name.  In German eyes, the Lusitania was an armed British merchant cruiser transporting munitions to England.  The ship had been built by the British government in 1906 with the stipulation that she could be commandeered in wartime.  The fact that she hadn’t been conscripted into the Royal Navy and didn’t have defenses on her was immaterial.  The Lusitania was carrying arms, or so Germany claimed.

Whether the Lusitania was truly a civilian ship or a military vessel became a source of heated debate after her sinking – and continues into the modern age.  The second, almost immediate explosion after the torpedo hit has encouraged conspiracy theories from 1915 to 2015.  Certainly the torpedo didn’t explode twice.  And the ship’s manifest clearly stated some armaments, including over four million rounds of small ammo.  Recent years have tried to make the ammunition stockpile a “discovery”, even though the ammo had been listed when on the ship’s manifest when it left port from New York. 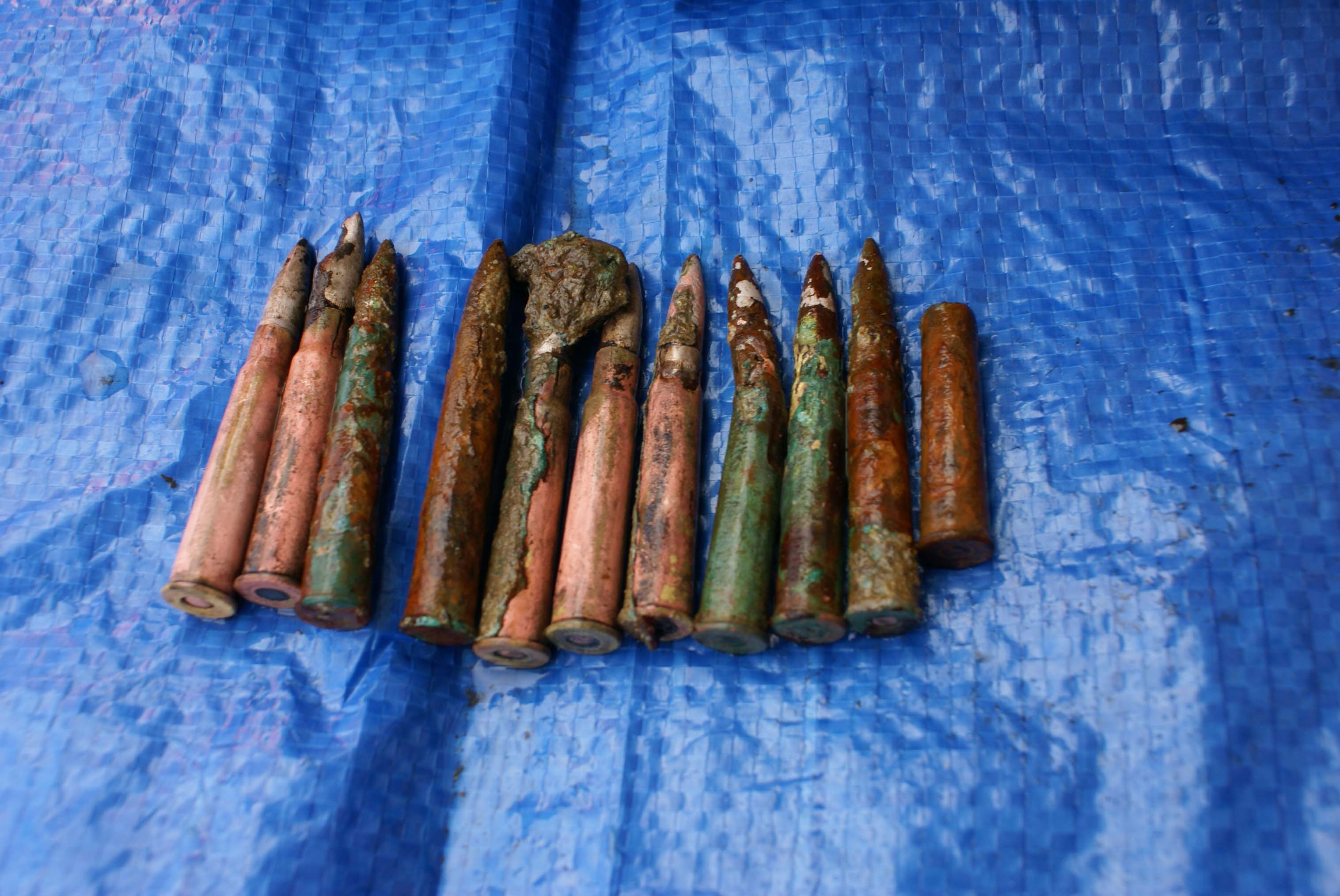 Was the Lusitania carrying munitions? It might be a question of semantics. There were 4.2 million rounds for small arms (some seen here) but US customs did not classify small arms ammo as munitions or war cargo

The ammunition most certainly did not cause the secondary explosion that forced the Lusitania to the bottom so quickly, as it was not explosive.  The commander of U-20, the U-boat that fired the torpedo,  Kapitänleutnant Walther Schwieger, probably had it right when he recorded the second explosion in his log book, stating “an unusually heavy detonation takes place with a very strong explosive cloud. The explosion of the torpedo must have been followed by a second one [boiler or coal or powder?].”

Unless the Lusitania was carrying significant explosives not listed on the manifest, the U-boat torpedo likely ignited the coal dust or aluminum powder in the boiler room, as both witnesses and Schwieger claimed the torpedo hit just under the bridge – right where the boilers would be.

No matter the cause, the result was still the same – the Lusitania was critically wounded.

The sinking of the Lusitania evoked anger that the United States was sitting out the war in Europe, depicted here as America as a buoy that Germany and Britain were sailing around

Unlike the Titanic just five years earlier, the Lusitania had enough lifeboats to accommodate both the passengers and crew.  What the Lusitania didn’t have was time.

Within ten minutes of the torpedo hit, the Lusitania was listing badly, making it nearly impossible to launch lifeboats from both sides.  Of the ship’s 48 lifeboats, only 6 were successfully launched – the rest either overturning or going down with the ship.  Only 18 minutes after the Lusitania was struck, she sank into the Atlantic.

The American public, which had cried foul on previous losses of American life at sea, now demanded vengeance.  The outcry wasn’t even a partisan issue, with even the left-wing The Nation even calling the sinking “a deed for which a Hun would blush, a Turk be ashamed, and a Barbary pirate apologize.”  About the only American who wasn’t prepared to declare war against Germany was President Woodrow Wilson, who couched his reluctance to fight as a point of pride: “There is such a thing as a man being too proud to fight. There is such a thing as a nation being so right that it does not need to convince others by force that it is right.”

“A Letter from the President of the United States” – this op-ed was far stronger than the actual letters Pres. Wilson sent to Kaiser Wilhelm II. Wilson said that any future sinking would be regarded as “deliberately unfriendly.” Still, the collusion course between American and Imperial Germany had been set

Wilson preferred words to actions.  Writing three letters to Kaiser Wilhelm II from May to July, Wilson argued that Germany had to abandon its unrestricted submarine campaign, lest Germany wished to appear “deliberately unfriendly” to the United States.  Even those rather timid words caused Wilson’s pacifistic Secretary of State William Jennings Bryan to resign in protest over the “provocative” nature of Wilson’s demand.

Teddy Roosevelt found Wilson’s approach “disgusting”, sarcastically noting that “If Lincoln had acted after the firing of Sumter in the way that Wilson did about the sinking of the Lusitania, in one month the North would have been saying they were so glad he kept them out of the war.”

Weak or not, Wilson’s letters provided Theobald von Bethmann-Hollweg the rationale he needed to convince Wilhelm II to stop the U-boat campaign.  Supported by his Chancellor and his Army Chief of Staff, Wilhelm pledged to stop targeting vessels flying neutral flags in British waters.

Germany’s best weapon for deciding the war on their terms had been dropped by their own hands.

While by the summer of 1915 it looked as though the United States had avoided entering Europe’s war, most of the political players involved knew the sinking of the Lusitania had set the nation firmly into the British camp.  Bryan’s replacement as Secretary of State, Robert Lansing, stated after the war that the Lusitania incident had filled Washington with the “conviction that we [the United States] would ultimately become the ally of Britain.”