There were three people who turned me into a conservative.

Four, if you count Ronald Reagan.  But before I, who grew up very much a liberal, could embrace the idea of conservativsm that Ronald Reagan put out there – and let’s remember that to a liberal Ronald Reagan, especially the version of Reagan that liberals discussed amongst themselves, was a very scary figure –  someone had to soften me up.

The first was Jimmy Carter.  He created a lot of Ronald Reagan voters. And with the “Malaise” speech and his relentless “America Last”-ism, he gave me a good start up the ladder.

The second was Dr. James Blake.  He was the head of the English Department at Jamestown College.  He was also that rarest of creatures – a college English professor who was also a conservative. The son of a New York cop, Blake described himself as a “Monarchist”; whatever, he also made me read Paul Johnson’s Modern Times, and Doestoevskii and Tolstoii and Solzenitzyn and, for that matter, P.J. O’Rourke.  I may have been the last person in Western History to have been pushed up the ladder to conservatism while majoring in a humanity.

But Carter’s impetus was negative; Blake introduced me to the high-level reasons conservatism was not only better, but indeed vastly preferable for intellectual and personal freedom.

But it was Jack Kemp who first connected those ideas to daily life for me; to money, to jobs, to the nuts and bolts of running a government and a society.  While Reagan focused on the big picture – as, indeed, a President and leader should – Kemp tackled the machinery.

In the wake of the Carter malaise, he was one of Reagan and Stockton’s foot-soldiers for supply-side economics. He first filed his tax cut bill – which became known as “Kemp-Roth” when it finally passed, in 1981 – in 1977, long before supply side economics was a household word. Kemp was more than an adherent; he was a pioneer.

“Every time in this century we’ve lowered the tax rates across the board, on employment, on saving, investment and risk-taking in this economy, revenues went up, not down”, he said – and, as a major mover and shaker during the Reagan years and George HW Bush’s HUD secretary, he worked to follow through, advocating privatizing public housing (a policy on which Clinton’s HUD boss Henry Cisneros followed through, after carefully rechristening it to get credit for his boss); many of the “welfare reforms” that happened during the Contract for America were ideas that Kemp had been instrumental in not only thinking up, but whose bureaucratic angles Kemp had worked through.  Kemp was the giant on whose shoulders the welfare reformers stood.

Kemp was a native of Los Angeles, the son of a small businessman who went to a small college, mainly because it was his best shot at getting to the pros as a football player.  He was a journeyman quarterback for years… 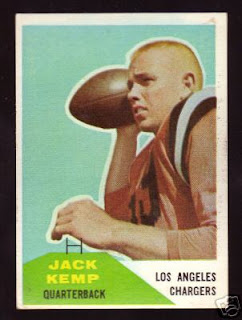 …he was present at “The Greatest Game Ever Played (before the ’86 Super Bowl)” – the Colts/Giants NFL championship game in ’58 – as a third-stringer on the Giants’ taxi squad. He was cut or traded by five teams before he latched on with the Buffalo Bills, back when the AFL was a separate league.

He led the Bills through a series of great seasons, before and after the merger with the NFL, before injuries slowed him down.  He was drafted to run for the US House in 1971 by the GOP, and he stepped away from his contract with the Bills to run his campaign.

Maybe it was the humble roots, the non-Ivy-League background, the years of struggle and failure before hitting it big, his self-taught nature that made Kemp a face of conservatism for the little guy. I’ve often said that Reagan’s great strength was that he translated Hayek and Friedman into something accessible to pretty much everyone; Jack Kemp turned those ideas into things of substance.  “The supply-side claim is not a claim. It is empirically true and historically convincing that with lower rates of taxation on labor and capital, the factors of production, you’ll get a bigger economy.”

And he was always a conservative Republican who spoke to the little guy first and foremost, as befitted perhaps a Rep from Buffalo; “There is a kind of victory in good work, no matter how humble“, he once said.

And as I moved to the city and started plying a trade – first as a bush-league conservative pundit, and then as a schmuck trying to make my way, and then again as yet another bush-league pundit, Kemp was consistently a voice and an inspiration to those of us who sought to break the noxious liberal strangle hold on places like Saint Paul.  And like many like me, I took inspiration from another Kemp protege in Jersey City, where Brett Schundler, a Reagan Republican who was very much in the Kemp mold, won three terms as mayor and tranformed his city.  When I’ve said that the Minnesota GOP will never really contest control of Minnesota until we make a play of it in the Cities, I’m echoing Kemp;  “There really has not been a strong Republican message to either the poor or the African American community at large“, he once said, nailng one of the enduring chinks in the GOP’s (albeit not conservatism’s) armor.

People say the GOP needs another Reagan.  That’s true to a degree, of course.  But Reagan spoke of truths that are eternal enough that pretty much anyone can remember them; freedom, limited government, security. Reagan took on the world.

Jack Kemp took on mainstreet, one store-owner, voter, program and American at a time.

What the GOP really needs, stat, is a few dozen Jack Kemps; people who can spread the gospel to everyone from the local town hall meeting all the way to the Beltway, and back again.