In 2003, and again in 2005, when Minnesota passed its “shall issue” firearm permit law, a slew of businesses “posted” themselves; they put signs on their front doors indicating they didn’t want firearms on their premises.

Most “posted” stores quietly dispensed with their signs in the year or two after the Minnesota Personal Protection Act was re-enacted in 2005.  Things stayed pretty well put, Minnesota-wise – except, of course, the number of law-abiding citizens with carry permits, which was 177,000 the last I checked (far eclipsing pre-2003 legislative research estimates of 50,000-90,000 permittees).

But the Obama Administration has been eagerly working to roll back gun rights, especially in the past two years.  And with Michael Bloomberg bankrolling his efforts, there is a concerted effort to turn law-abiding gun owners into the New Lepers – to try to re-stigmatize gun owners, the way the media were able to do in the 1960’s and 1970s.

All are, of course, attacking the problem of violent crime by going after those who dont’, won’t, and never have committed any (and by their existence indeed deter it) – but no matter.  It’s not about crime – if it were, Washington DC and Chicago would be crime-free paradises.

But if you read this blog, you’re probably smarter than that.

Unfortunately, a lot of uninformed and incurious people vote.  And Michael Bloomberg’s money is aimed largely at them.  And so the re-stigmatization effort is in full swing.  We’ve seen this with a small but vocal number of stores dusting off their posting signs – and, this summer, with the Minnesota State Fair posting its “no guns” signs, very possibly illegally.

It’s time to stop spending money at places that are posted. 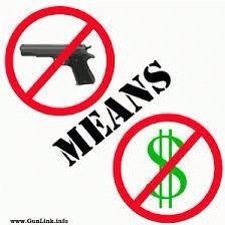 So take note, local merchants; if you’re posted, I won’t spend a dime at your establishment.  If I see you or your ownership siding with the anti-gunners in the media, I’ll also cut you off, and do my best to keep you cut off until you recognize the civil rights of law-abiding Americans.

That includes you, Minnesota State Fair.  While I broadcast from the Fair annually, and am happy to do it, I will no longer patronize any vendors at the Fair as long as the Fairgrounds are posted.

As much as it pains me to think of ten days of broadcasting at the Fair without Sausages by Cynthia’s Italian Dog, or a London Broil, or the Swiss Crepe from the Crepe stand, or a beer at O’Gara’s on a hot day, I’m not going to spend another dime at any Fair vendor, until the State Fair tears down the “Only Criminals May Be Armed!” signs.

Be advised, Twin Cities merchants.  You have your rights to run your business any way you want.  But you’re not going far without customers.

Can you afford to piss off 120,000 of us?   Especially since we’re the ones that tip, clean up after ourselves, and pass word of mouth along?

UPDATE:  I do need to credit the “No Guns = No Money” Facebook page for the image, and the whole “getting a movement rolling” thing.   Check out the page, and support them and, most importantly, the goal.

12 thoughts on “The Peasants $trike Back”