100 years ago tomorrow, the Battle of the Somme began.

We’ll come back to that tomorrow, on the anniversary of the battle’s launch.

Since 1588, when Queen Elizabeth I’s brand-new Royal Navy destroyed a Spanish invasion fleet, the United Kingdom had depended on the Royal Navy to be both the glue that held the Empire together, as well as the shield that kept the tiny, vulnerable island nation both safe and supplied.

The British Army, on the other hand, had always been the red-headed (not to mention red-coated) stepchild; existing as a creation of Parliament, cobbled together from centuries of expedience and accidents and the vicissitudes of nobility, subject to wild mood swings in terms of funding and staffing, and frequently serving more as a hard core for large armies of colonials, natives and mercenaries throughout the empire.  This had been especially true in the previous 100 years, when the end of the Napoleonic Wars ushered in the “Pax Brittania”, one of history’s longest eras of relative peace – ensured by British force of arms, meaning largely the Royal Navy.  During this time the Army had fought primarily as the empire’s policeman, fighting in large numbers only in the Crimea in the 1850s, and the “Boer War” in South Africa in 1899 and 1900 – wars that had led to little in the way of public relations, but much in the way of reform, after some disastrous early reverses.   The Army served mostly in obscurity, a closed-off warrior tribe.  The Army had wryly nicknamed itself “The Old Contemptibles” before the war, mirroring their view of their public image.

But the Army had had three things going for it.

All They Could Be:  in their isolation and obscurity, they – or at least the regulars – became very much a warrior elite.  At a time when ammunition was a downright cheap commodity, Army units would spend days at the range honing their marksmanship.  As noted earlier in the series, the firepower of the Contemptibles caught the advancing Germans by surprise in their first contact, at the first Battle of the Marne.  The Army had long been a force of long-serving career soldiers (the shortest hitch available to a full-time British soldier in the early 1900s was 12 years) backstopped with the “Territorial Army” and “Militia”, analogous to our National Guard, intended for home defense, who were trained to a much lower level.

For The Love Of The Game:  They were volunteers.  As, indeed, British soldiers had been throughout all of history; while the Royal Navy had long had a history of shanghaiing British citizens (and even foreigners) into service on their ships, the Army had been an all-volunteer force.  While conscription had been broached during the Napoleonic Wars, it was intended for home-defense forces – and even that proposal provoked a constitutional crisis in the UK.   At any rate – the British Army had always been primarily a volunteer force; as such, they had some huge advantages over largely draftee armies like Germany and France; the volunteers wanted to be there; when the chips were down and the stress of combat was at full blast, that fact was often the difference between carrying home an attack and taking cover and calling it off; between holding a beleaguered position and running away or surrendering.

Tradition:  The French have a term, “esprit de corps” – loosely, “Spirit of the Unit” – which means virtually nothing to civilians.  But in the extreme stress of battle, having that spirit, or esprit, is sometimes the difference between staying a difficult course and collapsing into a rabble.  That esprit is built from generations, even centuries, of tradition that imbue the soldier with the sense that they are part of a long-standing elite – and those traditions can not be let down.

The United States – being a country that was expressly founded out of a fear of standing militaries, and the long-standing traditions they accrete – was largely unfamilar with this idea for most of two centuries; its military units, almost entirely raised by the states for all major wars, from the Revolution through the Spanish-American War, tended to have no history to them at all; in each of these wars, the US really had two armies; the “US Army”, the tiny, professional force of long-serving regulars, and the various armies of state troops committed to federal service; that’s why most of the units of the Union and Confederate armies during the Civil War had names like the “First Minnesota” and “23rd Virginia”; they were state units lent to the federal or confederate government, as the case may be.  Even with the sunset of the state militia system before World War I, American units in both World Wars and Korea tended to be created on the fly, given an anonymous, administrative numbers (the “175th Infantry Regiment”), and dissolved when the war ended.

And it makes a difference.  In the Battle of the Bulge, the US 106th Infantry Division – an anonymous unit with no history, no tradition (and very little training and no combat experience) folded like an Ikea end-table under the German attack, while the 101st Airborne – a unit with three years of tradition (and experience (and training as an “elite” paratroop division) held out while surrounded at Bastogne.

The exception?  The US Marines – who use their hundreds of years of tradition as a fundamental building block of their  esprit de corps.  A member of the First Marine Regiment (“The First Marines”), gets the Regiment’s history – Belleau Wood, Guadalcanal, Peleliu, Okinawa, the Chosin Reservoir, Hue – drilled into his head; it makes the Marine part of a tradition that must be upheld.

It seems corny and overwrought to civilians – but it’s been the difference between standing and running, between victory and defeat, and ergo life and death, for countless servicemen.

And it’s been the status quo for Britain forever; even in 1914, there were British units with 250 years of tradition; units like the Grenadier Guards, the Black Watch, the King’s Royal Rifle Corps, the Royal Scots each had centuries of battle honors, heroes, shared mythology, all of which – along with years of hard training – contributed to the units’ ethos, as elites who were just plain better than their conscripted German opponents.

And in the first weeks of the war, before constant combat against long odds, heavy artillery and machine guns ground the Contemptibles down to a shadow of their former strength, they were,  Much, much better.

The Reboot:  In September of 1914, Lord Kitchener – the legendary hero of the Boer War – broke from the majority of British policymakers’ opinion. While most sunnily held that the war would be over by Christmas, Kitchener believed, almost alone, that the war was going to be long and brutal, and that the Contemptibles (who had not quite yet gotten into the thick of the action) would need help.

With Kitchener’s leadership (and likeness), the Army launched one of history’s iconic ad campaigns: 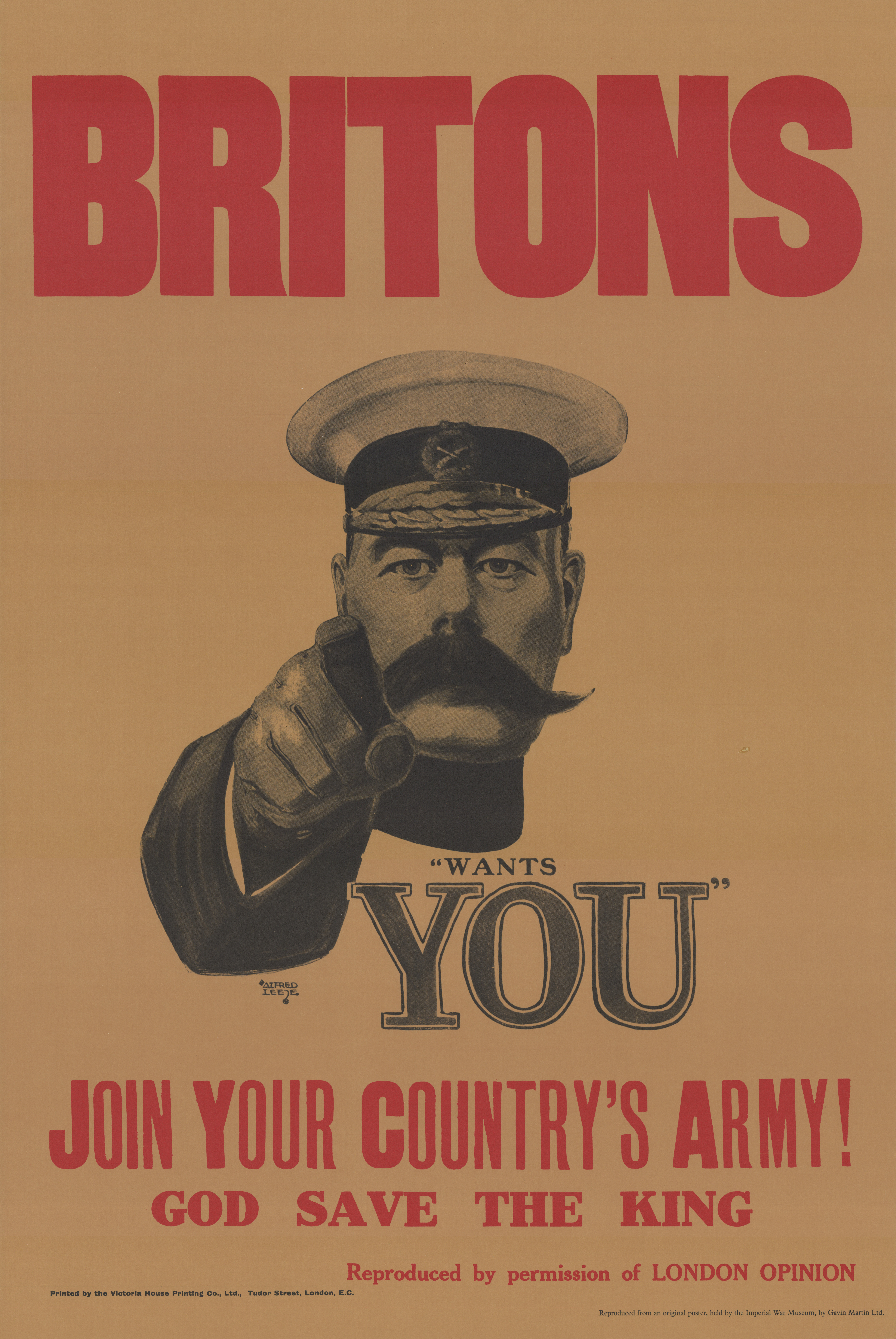 Kitchener Wants You. Kitchener was a hero of the Boer War, and a popular figure in Britain in 1914; imagine if David Petraeus had become a media star after the Anbar Awakening, and then multiply it.  The US could only muster “Uncle Sam” for its parallel campaign in both World Wars.

The call went out for volunteers to staff an entire “New Army” – actually five “New Armies”, each a force of six infantry divisions plus support troops.

Among them were a large number – over 200 – “Service” or “Local Reserve” battalions, each affiliated with an existing regiment, each initiated by a sponsor – a town mayor, a member of parliament, a trade group, a school, a factory, even a club (there were three battalions formed from “football” associations, the “Football Battalions”).   These battalions, made up of men from the same town, trade or avocation, were called “Pals Battalions”.

In A Village In Lancashire:  On September 2, 1914, in rural Lancashire, the mayor and town council of the village of Accrington opened a recruiting station to begin assembling men for a new unit; officially, it was the 11th Battalion of the East Lancashire Regiment – a unit formed in 1881 from two earlier regiments with battle honors dating back to 1702, in India, Gibraltar and the Napoleonic Wars; as the “East Lancs”, they fought with distinction in the Boer War.  It was into this tradition that the men of the 11th Battalion were inducted.   It took precisely ten days to recruit the men for the entire Battalion.

Notwithstanding the fact that the roughly 1,000 men (in four rifle companies of around 220 men, plus a headquarters and service company) were from all sorts of villages in East Lancashire – Burnley, Blackburn, Chorley and others – the battalion was sponsored by the mayor of Accrington – so the 11th was nicknamed the “Accrington Pals”, a name that stuck with it throughout its service.

The 11th Battalion went through training near Accrington – the War Office and the Army didn’t have anyplace to barrack the men, in the confused early days of the war, so the men lived in tents, or at home.  There were also insufficient rifles, and even uniforms – so the Battalion’s NCO’s frequently wore the bright scarlet field uniforms left over from the early days of the Boer War (which were replaced with dull khaki when the scarlet proved to be a perfect target for Boer marksmen), while the enlisted men frequently drilled in civilian clothes with regimental badges pinned on, carrying wooden mockups of rifles until the real thing became available.

Eventually, uniforms, rifles, and a War Department directive arrived – and the Pals joined the 94th Infantry Brigade (with two “Pals” battalions from Barnsley and one from Sheffield) of the 31st Infantry Division – part of Kitchener’s Fourth Army, a division mostly built from other “Pals Battalions” from northern England.  After training and a period on Home Defense duty, the Accrington Pals initially deployed to Egypt with the 31st Division, to ward off a potential Turkish threat to the Suez Canal, before being recalled to France in the late spring as part of a buildup for an upcoming offensive in the region along the Somme River, in northern France.

We’ll come back to the battle – and the Accrington Pals – tomorrow.

1 thought on “The Somme, Part I: The Accrington Pals”