Here is a long-lost photo of President George Washington performing his duties under Article 1 of the Constitution, dealing with The Whiskey Rebellion by intimidating rebels with passages from . . . “Where The Wild Things Are.” 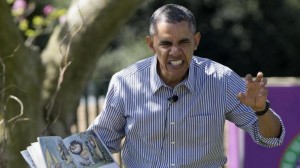 No? Well, maybe it’s Abraham Lincoln urging his generals to fight The War To Save The Union, using tactics from . . . “Where The Wild Things Are.”

Not him, either? Well, it must be someone doing something Presidential. It can’t be someone posing for a silly photo op when there is so much important work the President should be doing.

Oh wait, I know: it’s President Obama, who brought peace to the Middle East, ended aggression in Eastern Europe, resolved territorial disputes in the Far East, balanced the budget and brought prosperity to all Americans, so he now has time to read stories to children.

Of course, when he opened the book, the US had been at peace for ten years, we were at the tail end (we now know) of the Peace Dividend boom, and people were talking about “permanent prosperity”.