For nearly two years, the Axis had been mostly in retreat – fleeing from distant battlefields as the reach of the Axis’ leaders exceeded their grasp.  But on the morning of March 6th, 1944, the largest Axis offensive since Kursk began, and with it, an attempt to settle one of the many fronts on which the war was being fought.  On what had long been the relatively quiet frontier between Burma and India, the Japanese Army launched what their commander believed would be the decisive battle not just for India, but the entire Pacific War.

It would end with the costliest defeat in Japanese history.

At the nexus of colonial ambition and military weakness during World War II, sat India.  Guarded jealously, and nervously, by the British, and desired desperately by the Japanese, the fate of India seemed permanently in flux – forever just out of reach of either being conquered or protected by two colonial empires whose focus lay elsewhere.

The 7th Rajput Regiment: over 2.5 million Indians volunteered to serve in the Indian Army in World War II, making it the largest all-volunteer fighting force in history (to that point).

For England, India remained the Empire’s crown jewel.  An economic engine and a seemingly endless source of manpower (over 2.5 million Indians served in the military – as volunteers), India played a central role in the fighting in North Africa and Italy.  The nation also provided a key supply route to Chiang Kai-Shek’s Chinese nationalists, whose defeats on the battlefield achieved the only success the Allies cared about – tying up millions of Japanese troops (over 4 million Japanese troops would eventual serve in China).

Losing India would be crushing blow not merely to British morale, but the British war machine.  But despite driving the British out of neighboring Burma by the spring of 1942, the Japanese Army seemed content to sit on the Indian/Burmese border, preferring political acts to military ones.  Japanese propaganda played heavily upon the creation and recruitment of the Indian National Army, led by former Indian Congress President Subhas Chandra Bose.  The INA made copious amounts of noise, riding the wave of Indian discontent brought about by famine in Bengal and Gandhi’s “Quit India Movement” of passive resistance.  But it was sound and fury signifying nothing.  The 40,000 soldiers of the INA found what the other collaborators of the Greater East Asia Co-Prosperity Sphere discovered – if the British made them subjects, the Japanese intended to make them slaves.

Exhausted British soldiers during a break in the Battle for Imphal. 17,500 British and Indian troops were killed or wounded in the main battle for India.

Japan’s military resources may have been at their peak (6 million men), but like the British, were stretched thin.  40 divisions, the vast majority of the Japanese Army, sat in China or Manchuria.  The Japanese 15th Army in Burma held only a handful of infantry divisions and one tank regiment – hardly the sort of invasion force that would be expected to subdue a nation of (then) 332 million people.

That didn’t matter to the 15th Army’s commander, Lt. Gen. Renya Mutaguchi.  Mutaguchi had been one of Japan’s most effective ground commanders throughout the Pacific War, winning decisive battles in Malaya, Singapore, and Bataan.  But Burma was a long ways from his glory days in the beginning of the war.  Given the 15th Army post in 1943, Mutaguchi largely sat in place, becoming increasingly frustrated with the Army’s inaction.  Prodded to act by a combination of Orde Wingate’s Chindit adventure and Subhas Chandra Bose’s grandiose promises that the civilian population of India would rise up if it looked like Japan might win, Mutaguchi gained approval for an offensive against the Indian city of Imphal.  Arrogant and reckless, Mutaguchi overruled his subordinates’ concerns, believing he could knock the British out of the war with a well-placed strike.

Quit It: while some Indian nationalists tried to ally themselves with the Axis to force the British out, Gandhi and others led the “Quit India” Movement – essentially non-cooperation with the British. 60,000 Indians, many of them elected officials, were arrested.

The British had preparing an offensive of their own in the spring of 1944 – to be launched from Imphal.  Over the past year, Imphal had become the supply hub for the entire Indian front, not to mention for China.  The British 14th Army, under Gen. William Slim, was no longer at a numerical disadvantage as they had been in 1943, when the British and Chinese were likely out-numbered 380,000 to 160,000.  Evenly matched, and with Orde Wingate’s 6,000-man Chindits causing havoc behind Japanese lines, the Japanese were sending the bulk of their Burmese army into the teeth of a well-supplied, armored opponent.

The Japanese invasion, Operation U-Go, launched on March 6th, with Mutaguchi dividing his force in an attempt to create a gigantic pincer movement around Imphal.  Slim, operating on limited intelligence information, knew only that Mutaguchi intended to attack, but not where.  Seeing an opportunity to draw his forces closer to their supply lines at Imphal, and drag Mutaguchi further away from his own, Slim ordered a tactical retreat.  The immediate result was chaos. Conference of Collaborators: a meeting of the Greater East Asia Co-Prosperity Sphere; the fig-leave covering Japanese imperialism. India’s representative, Subhas Chandra Bose, is the one on the far right.

The 17th Indian Division was completely cut-off from the 14th Army.  Mutaguchi had employed the same tactics that had worked in during the invasion of Malaya, by-passing enemy units to surround them and eventually force a surrender.  While Japanese tactics hadn’t changed, the British reaction to them did.  Instead of British units hunkering down when surrounded, Slim ordered all resources to breaking out the 17th Indian Division, and getting them to rejoin the 14th Army at Imphal.  Slim’s decision to abandon prepared defensive positions appeared unwise, and while the British had recovered from the initial Japanese thrust, the British now had their backs against Imphal, with the Japanese slowly making their away around the city.

But Slim’s withdrawal would pay dividends.  Mutaguchi, already believing his strategic skills to be infallible, had gambled on over-running British positions and using captured British supplies to feed and power his army.  Slim’s somewhat orderly withdrawal, after the initial stumble, robbed the Japanese 15th Army of badly needed food and ammunition.  Mutaguchi believed the entire campaign would be finished in three weeks; after four weeks the Japanese found themselves stalemated and nowhere close to occupying Imphal.

An American-made M3 Lee tank with British troops. Over 1,700 M3’s were shipped to the Indian front, resulting in the largest tank battles of the Pacific War. Despite being moderately armored, these tanks fought and bested the lightly-armored Japanese Type 95 Ha-Go’s.

Worse for the Japanese 15th Army, Mutaguchi believed the British couldn’t possibly use their armor in the thick jungle.  The 1,700 M3 Lee’s in the Indian/Burmese theater of operations begged to differ.  The M3 Lee was an imperfect tank against the panzers of the Wehrmacht, given the tank’s high-profile and limited turret-turning capacity, but against the lightly-armored Type 95 Ha-Go’s Japan had on the battlefield, it was practically invincible.  Even the poorly-armored M3 Stuarts the British had (both the M3 Lee and M3 Stuarts were American-made tanks) were at least the equal of Japanese armor.  Mutaguchi hadn’t made bringing anti-tank units a priority, resulting in largely one-sided battles wherever British armor appeared.

By the start of April, the real battle for Imphal began – the battle of supplies.  Slim ordered limited counterattacks to cut-off Japanese lines of supply.  The Chindits, back in Burma, harassed Japanese supplies and forced reinforcements to try and clear the them off the major transportation routes without success.  The expected Indian “uprising” never materialized, while INA troops actually began deserting back to the British.  The Japanese 15th Army was dying on the vine. Japanese troops stand over the bodies of executed Indian troops. These captured troops had refused to join the Japanese-backed Indian National Army (INA). 40,000 Indians did eventually join the INA to limited effect.

Rather than retreat, Mutaguchi doubled down on his offensive, attacking north of Imphal at Kohima.  Despite the British description of the battle as the “Stalingrad of the East,” neither the stakes nor the death toll was anything close to impressive.  The two-plus month siege of Kohima involved probably no more than 25,000 men total between both sides with not even 11,000 killed, wounded or captured.  If anything, the Siege of Kohima represented yet another strategic blunder by Mutaguchi.  Instead of committing his forces to breaking the British defenses at Imphal, he preferred to try and win a battle whose outcome would probably have little effect on his main objective.

By May 1st, all offensive Japanese operations had ceased.  Even the commanding generals were starving.  But no one wanted to take responsibility for ordering a retreat.  At a comical meeting of officers on May 25th, Mutaguchi and a senior commander from the Imperial Headquarters, assigned to assess the battle’s progress, engaged in a nearly wordless exchange using mostly body language (called haragei in Japan) to try and get the other to order a withdrawal.  With no one willing to tell the Imperial Headquarters about the state of the army at Imphal, Mutaguchi ordered yet another offensive.  The orders were never carried out – there simply weren’t enough healthy troops to comply. 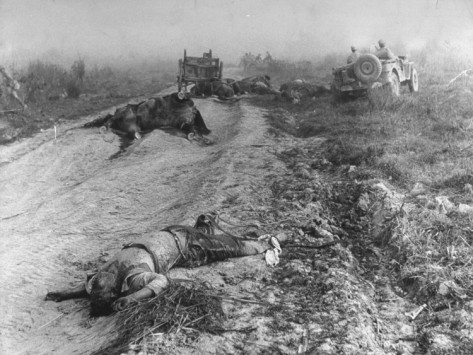 British jeeps move past dead Japanese soldiers. The invasion of India cost Japan and her allies over 60,000 troops – making it the largest Japanese defeat of the war (so far). Japan’s offensive abilities on the ground were broken and represented the last gasp of any of the major Axis powers to regain the initiative.

Unsure what to do next, Mutaguchi ordered that offensive operations cease on July 3rd – even though they had for months.  With British units counterattacking, the Japanese frontline commanders understood the implication of Mutaguchi’s command.  It was a close to an order to retreat as Mutaguchi could give without incurring the absolute wrath of his superiors.  They abandoned their positions, retreating back to Burma.  It was not an orderly retreat.  Artillery, tanks (hundreds of them), guns – all were left behind.  As were thousands of men.  Only on paper did the 15th Army still exist.

The scale of the loss, concealed from Tokyo until the retreat had already occurred, horrified the Army.  60,000 men had been killed, wounded or captured.  The Japanese Army in Burma had been effectively destroyed.  It was the largest military defeat in Japanese history (and would be massively surpassed the next year when 336,000 soldiers died in the Philippines).  Mutaguchi’s premonition had been right – he had led the battle that decided the war on the Indian/Burma front.  He had only guessed the outcome incorrectly.

Of course, there was still plenty of fighting to be done in Burma before the war was finished.  Rangoon would not fall to the Allies until May 6th, 1945.  But the strategic momentum had shifted to the British, and now free from worry that the Japanese could threaten India, moved resources to other fronts.  The eventual liberation of Burma would be a drawn-out affair, but due as much to strategic British disinterest as to Japanese resistance.

6 thoughts on “The Setting Sun”