Earlier this week, the Joyce Foundation collected another installment on its payment for the MinnPost’s PR services in pursuit of disarming the American people – in this case, a “Community Voices” column by by Rebecca Lowen and Doug Rossinow, who are listed as “history professors at Metro State”. 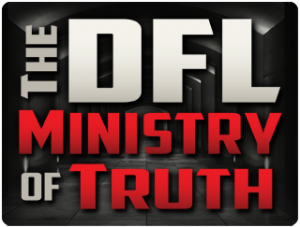 Those who fail to learn from history, it’s fair to say, teach history at Metro State.

And if this reflects the current state of the victim-disarmament movement, it’d seem their strategy has shifted to “ad homina” and “making things up”.

Baghdad Bob Smiles:  The German movie Downfall, about Hitler’s final days in Berlin, includes a classic (and much-re-dubbed) scene in which Hitler’s advisors gingerly try to tell him that the Army units he’s maneuvering about the maps to try to stem the Soviet tide are all imaginary; skeleton forces at best, long-wiped-out in many cases.

Rossinow and Lowen’s version of the Victim Disarmament movement in Minnesota reminds me of that scene:

Given the divided control of Congress and the perpetual deadlock that has resulted, we expect little to happen at the national level this year. We also have our doubts about the prospect for success in Minnesota.

We come to this conclusion with sadness. Last spring, we participated in the effort to advance gun-violence prevention in Minnesota. With many others, we held meetings, rallied supporters, spent long days at the Capitol, tracked the fate of various gun bills, and spoke before House and Senate committees considering bills to mandate universal criminal background checks for gun purchases and to limit the size of gun magazines.

And that might be true, in a sense – I’m sure Rossinow and Lowen were there.

But there were not “many others” involved.  At least not on the victim disarmament side of the battle.

Every time I went to the Capitol, the pro-human rights Real Americans outnumbered the orcs by a minimum of 30:1.  Sources at the Capitol told me that emails and phone calls favored Real America even more – closer to 50:1 for legislators from suburban, exurban and Greater Minnesota.

The lopsided difference in support is important.  We’ll come back to that.

History Rewritten While You Wait:  The authors next try to diagnose why the gun movement failed in Minnesota.  And to do it they concoct a fairly preposterous rewrite of recent Minnesota history:

We are currently out of the fray, in the middle of a six-month stay in Oslo, Norway. With distance, we’ve reflected on our state’s failure but also on the successful passage of gun-violence prevention laws elsewhere. Why did Minnesota, unlike Connecticut, New York, Maryland and Colorado, fail to pass meaningful legislation on the gun issue in 2013?

First, we’re going to take a swerve through Creative Writing:

One answer is that gun-violence prevention got slighted in Minnesota because of a crowded legislative agenda.

Which is simply madness.  While the authors point out that Colorado, Maryland and New York jammed down more liberal pet legislation – gay marriage, in-state tuition for illegal immigrants, loosening voting laws – than Minnesota.

But the Minnesota DFL caucus also squandered immense time and resources on trying to jam down gun grab bills, including close to a dozen in one memorable string of hearings in January.  Gun bills by Senator Latz and representatives Paymar, Hausman and Martens were the subjects behind weeks of meetings, endless hours of debate, and uncounted time wasted.

Alternate Realities Are Racist!: Never mind the time and energy that the DFL – or really its metrocrat leadership – wasted trying to jam down gun bills that nobody, even a fair chunk of its own caucus wanted.

Evidence indicates that women, African-Americans and Latinos disproportionately favor gun-violence prevention laws. Could their representation — or lack thereof — in the state legislatures be a significant factor in affecting the outcomes in the different states?

But for race, the evidence suggests the answer is “yes.” We are aware that our state is very white. But it is not much whiter than Colorado, where the combined percentage of African-Americans and Latinos in the population is 13 percent. (The figure for Minnesota is 10 percent.

Comparisons of the racial composition of each of these states with that of its legislature reveals a legislative underrepresentation of blacks and Latinos, combined, of 26 percent in the Colorado legislature, of 34 percent in Maryland, and of a whopping 75 percent in Minnesota.

No, that’s what the authors think:

The absence of any critical mass of minority legislators in St. Paul makes it significantly easier for DFL leaders to brush aside the issue of gun violence — which is exactly what they did last session. They treated the issue as an annoyance, not a priority.

If the citizens of, say, Bobby Jo Champion’s district in DFL-sodden Senate District 59, covering downtown and near-north Minneapolis,  were to elect a white male DFLer, then suddenly SD59 would welcome Ted Nugent?

What the authors have done is take a statistic – “black people support gun control” – and assumed “so white people do not”.

But gun control in Minnesota is a regional and class affectation, not a racial issue.  Urban Democrats support gun control – and nearly all African-Americans in Minnesota live in DFL-dominated districts, and vote DFL just as religiously as their white liberal neighbors.

A state-to-state comparison also shows that the role of top leadership on this issue is critical…Governors John Hickenlooper of Colorado and Martin O’Malley of Maryland defined this as a top priority. Hickenlooper made the issue a personal cause. Colorado’s Speaker of the House and Senate Majority Leader both went to the mat to achieve the changes they believed in. The leaders in Maryland and Colorado also demonstrated political savvy and strength in holding their caucuses together on crucial votes.

But what happened in Colorado, after all of that “political savvy” and “going to the mat?”

The Situation In Fact:  Perhaps it’s a good thing that Rossinow and Lowen are in Norway.

In contrast, Minnesota’s Democratic leadership behaved timidly at best. Gov. Mark Dayton said as little as possible and did nothing at all on the gun-violence issue. The word went out that the budget was his priority. Colorado and Maryland also passed budgets last spring, but they managed to do many other things as well.

Notwithstanding that Dayton and the DFL botched the budget completely – Minnesota isn’t Maryland.  Gun owners in Maryland have no influence.  On the other hand, the Minnesota Gun Owners Civil Rights Alliance has already swayed one election (2002), and could very well play a key role in 2014.  Dayton felt impelled to compaign as a Second Amendment supporter – not just “I’m a hunter”, but “I’ve got a pair of .357 Magnums!”.

And he’s not the only one:

Top legislative leaders here would not take on the issue. Senate Majority Leader Tom Bakk voiced his personal hostility to gun regulation. House Speaker Paul Thissen expressed his personal support for reforms such as universal background checks. But he and other liberal DFLers shrugged aside gun-violence prevention advocates, saying, essentially, “The votes just aren’t there.”

Seriously; according to Lowen and Rossinow, if only Tom Bakk were black and female, maybe he’d have come around?

Nonsense.  Tom Bakk lives in a mostly white district where people like their swag from the government – and their guns.

Making S**t Up As They Go:  Rossinow and Lowen claim to have been at the Capitol – but you’d have to look hard for evidence they were, or that they really understood what was going on:

Behind the scenes, Rep. Michael Paymar worked doggedly to shepherd a background-check bill through his House Committee on Public Safety, only to be undercut by one of the DFLers on his committee, Debra Hilstrom, who reached out to the NRA for help in drafting a rival bill. With no caucus discipline in evidence, Paymar was forced to come to terms with Hilstrom, and the committee ultimately passed a much weakened bill.

The only way Paymar was “in the background” was when Heather Martens trampled him to get to a microphone.

It was Paymar that was the outlier!

Patrician Rage:  Rossinow and Lowen apparently suffer from Pauline Kael syndrome; everyone they know supports them, so they must be the majority:

What explains DFL leaders’ fearful response to an issue that is becoming one of the great moral concerns of our time? What keeps them from marshaling legislative support for a proposal such as universal background checks, which polls show an overwhelming majority of Minnesotans support?

They’re DFLers, but they’re not stupid?  They know that a bipartisan majority of Minnesotans support the Second Amendment.

They know the poll was a garbage push poll that measured uninformed off the cuff responses to a question without context, a survey that’d have no impact on an election.

And some of them even know that for most people, the gun issue isn’t the “great moral issue of our time” – support for gun control is half a mile wide and an inch deep – but that the majority of people who see it as a moral issue inciting passion and political action are on the pro-Second-Amendment side.

Truth Is For Peasants:  Next, Rossenow and Lowen dive into outright fabrication:

DFL leaders buckled before the NRA and its backers

We know anti-reform forces in out-state Minnesota are formidable. We saw this up-close at the Capitol last year, when the NRA flooded government buildings with busloads of angry men, some of them probably armed.

And this is just a lie.  The only “busloads” brought school children from Minneapolis to serve as stage props for Paymar and Martens.

The rest of us – with help from the NRA, but mostly with GOCRA – came on our own time and dime.

Oh, yeah – and not only were they plenty of women among the Real Americans, but they are, to a person, a hell of a lot smarter, better informed and – dare I say it? – more attractive than the bobbleheaded Kenwood/Linden Hills set that showed up for the orcs, in their matching black T-shirts and joyless scowling through ossified frown lines.

Partly this is because the representation of rural parts of our state is exaggerated in the Minnesota Legislature — the flip side of the underrepresentation of people of color. And partly it is due to the careerism and culture of excessive caution that mark the DFL.

This is stated as fact.  Perhaps Rossenow and Lowen need to take that up with the Minnesota Supreme Court, which bent over backwards to ensure “people of color” – or at least the political party that wraps itself in race – were represented at least “fairly” in Saint Paul.

Immolate!:  The two authors end on a dour note:

Sadly for our state, DFL leaders did feel it was acceptable to do nothing. We would like to think things will be different this year, but the factors preventing success last year remain.

“Factors” like “a semi-functioning two-party system” and “a First Amendment”, and “a decisive bipartisan and non-partisan majority against Rossinow and Lowen”.

But let me say this:  I  hope a majority of DFLers do follow Rossenow and Lowen’s wishes, and launch a “death or glory” assault on the Second Amendment.

9 thoughts on “Because Racism”