I went to the House Public Safety Finance committee hearings on the Paymar and Lesch gun bills last night.

More on the event itself a little later.

But I thought this bit was interesting.

The hearings were scheduled for 5:30.  At around 4:45, House staff started passing out copies of an amendment that Paymar reportedly planned to propose for the bill.  Here’s the link to the amendment.  Paymar – the committee chair – waived the Legislature’s new 24 hour waiting period on amendments to get it in for the hearings.   He also passed the word that no public testimony would be taken.

Recap:  45 minutes before the committee hearings – which took place at 5:30PM on March 21 – the DFL committee chair distributed an amendment that fundamentally changed the tenor of Rep. Lesch’s bill.

Now take a look if you will at the time-stamp on the file.  I circled it, so that even I can’t miss it: 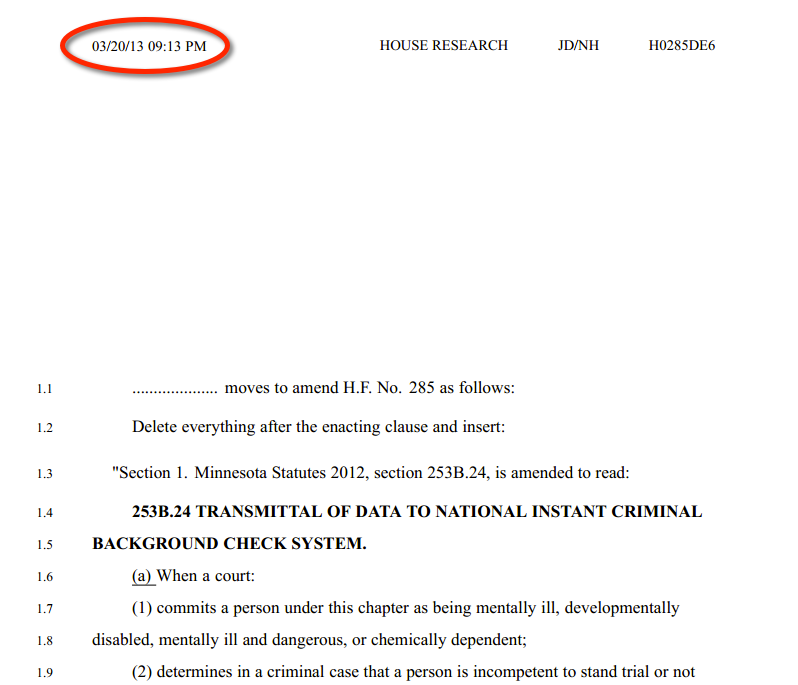 9PM the night before. That’s right around 20 hours.

So I have a few questions:

Rules, Apparently, Are For Peasants: From the House permanent rules, section 6.22:

6.22 PUBLIC TESTIMONY. Public testimony from proponents and opponents must be allowed on every bill or resolution before a standing committee, division or subcommittee of the House.

How does this not rate public testimony?

Ethics Are What The DFL Says They Are:  Paymar waived his party’s own rule on the waiting period for amendments to jam down a fundamentally bill-changing amendment, sitting on it for nearly a day after reneging on his “promise” to Rep. Hilstrom before dumping it outside the hearing room 45 minutes before the hearing.

If only the ethics committee could hear about it.

If Only We Had An Institution, Full Of Highly-Trained People With Years Of Experience Asking Questions And Who’ve Convinced Themselves That They Are A Monastic Elite Apart From Society With A Mission Of Keeping Institutions On The Straight And Narrow.  Perhaps With Printing Presses And Transmitters:  More on this later.

Michael Paymar is going to attempt to jam down amendments wrecking perfectly good bills – like Hilstrom’s and, to an extent, Lesch’s – which are supported by a bipartisan majority of the House.  He’s going to do it because the DFL’s lotus-eating metrocrat pandits find guns in the hands of the plebeians distasteful.

There’s really no other reason.

6 thoughts on “Paymar: Above The Rules”