Upon further review – the Minnesota Vikings spent a fortune to acquire their new stadium.

The Vaseline Dome has re-entered the media picture in the last few weeks, as new concerns have been raised about the viability of the electronic pull-tab funding mechanism which has fallen $13.2 million short of yearly estimates.  Or more accurately, completely fallen apart since the State had expected the pull-tabs to generate $15 million a year, putting the threat of needing general funds to finance a luxury item back on the table.

Flawed or not, the stadium financing figures aren’t the only numbers that have come to light in recent weeks.  We now know how much Zygi Wilf and company spent in their multi-year lobbying effort to build a stadium in the exact same location as their current home – $4,270,000. 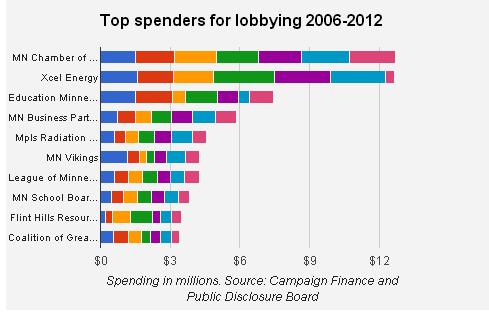 The Vikings were the 6th largest lobbyist group (by dollars spent) in the last six years.  And while the $610,000 spent last year as the stadium was finally approved was a drop in the bucket of the estimated $54 million spent by all lobbyist groups in 2012, the $1.5 million used by the Vikings during 2011-12 would have made them the 3rd largest lobbyist of the cycle. Even lobbying powerhouse Education Minnesota spent slightly less at the Capitol in that period.  Purple pride indeed.

$4.2 million for $975 million is a tremendous value (although the Vikings spent millions more in stadium-related advertising).  But the end product may not look like such a deal if the financing structure collapses in on itself.  Which begs the question – what happens when the State finally admits the pull-tab solution isn’t working?

The state’s $498 million share of the $975 million project is to be paid for through sales of electronic pull-tabs. But the final two pages of the stadium bill provide for two “blink-on” funding provisions as backups. The first is an NFL-themed lottery and the second, if necessary, is a 10 percent tax on luxury suites.

And what of the doomsday scenario, where all three provisions fall short of the money required for the state’s annual payments? At that point, from what I can tell, the state would have to produce money from its general fund — something Gov. Mark Dayton promised not to do when campaigning for the facility.

Would either of these other solutions generate the revenue necessary?  A Vikings-themed lotto doesn’t sound fundamentally different than the pull-tab concept.  The Minnesota Lottery brought in $123 million in profit last year, but that’s among 9 different games.  A 10th lotto isn’t likely to expand the number of people playing, only shrink the total amount left that would otherwise go into the State’s coffers.  Besides, over 70% of the funds generated by the lottery go either to paying winners or towards lottery administration.

The most likely end game for the Vikings stadium financing shell game lies within the 10% luxury suite tax.  Current suite rental prices aren’t terrible by NFL standards, running around $15,000 to $26,000 a game.  Slapping another $1,500 or $2,000 is unlikely to cause any corporation to abandon their suite, but certainly won’t make the Vikings happy as they compute what to charge going forward.

The only real problem with the luxury tax idea is that it was envisioned as a last-gasp measure, meant to fill in a minor funding short-fall – not the State’s entire share.  If the Vikings lotto goes the way of the pull-tab, that’s precisely what the tax will become.  And if that occurs, the political football of using general funds will be kicked right at Mark Dayton’s 2014 prospects.