PIERS MORGAN: I have an interview coming up with two young women who wrote a piece in which they said they wanted the rights of the AR-15 weapon at home because they feared they would be attacked and they wanted a gun that would guarantee they would murder or would kill their attacker. How do you respond to that particular argument, which is they believe under their second amendment right they should be allowed an AR-15?

Hon? You should try a lighter rifle. Rep. Carolyn McCarthy (Orc – NY) says you’re too weak and ineffective.  Oh, yeah – that’s an “M16”, which is like an AR15, but fires full-automatic, like a machine gun, which is shorthand for “more testosterone than Chuckles Schumer has ever had”.

CAROLYN MCCARTHY: I will tell you, if you talk to professionals, hunters and certainly sportsmen, they’ll tell you that’s not the gun to use. A rifle is more accurate. It’s certainly easier for a woman to be able to do that. 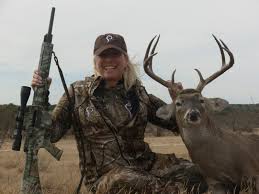 Heyyyyy! That’s a woman! And she’s hunting! With an AR15! And she shot a buck – call Naomi Wolf, we’ve got symbolism on aisle 15!

Oops, sounds like someone mixed up her chanting points.  The 2nd Amendment isn’t about hunting.  And while an AR15 isn’t everyone’s first choice for a home defense gun – too much overpenetration for my taste, but I live in the city – it’s not a bad one, either, objectively.

Not only are those women – Israelis, in this case – but those are all M16s, too.  Six women with fully-automatic weapons.  Doesn’t Rep. McCarthy seem a bit like an Iranian Mullah in comparison?

And one wonders if Rep. McCarthy knows that not only is the AR15 a rifle, and one of the most popular hunting rifles in most states, but also one of the lightest, lowest-recoil and easiest-handling rifles anywhere in the gun business? It’s Lyudmila Pavlichenko. And she’s carrying a “real” rifle, a Nagant M93. Which has about double the hitting power of an AR15, and is great for going after elk, but not normally ideal for inside-the-home defense. However, I wouldn’t invade Ms. Pavlichenko’s home; she had 309 confirmed kills in under a year during World War 2. The USSR, like the Israelis, used female snipers alongside the guys. Pavchenko was the top scorer.  I bet she could pick your nose with an AR15, too. Oh, yeah – and she had a masters in literature!

At any rate, Rep. McCarthy, leave the thinking to the smart women. Many of whom are shooters.

13 thoughts on “The Latest Gun-Control Argument: “Women Are Too Weak””