I remember reading a book about thirty years ago – The Social History Of The Machine Gun, or something like that.  It was a pseudo-academic treatise, adapted for some shred of popular market appeal, that talked about the social roots of fully-automatic weapons.

In one of the first chapters, they included the plans for an early, rudimentary multi-chambered cannon.  It dated back to the 16th or 17th century, and had five or six chambers attached to a circular plate; the plate could be rotated to push the chambers up against the barrel for firing – sort of the anscestor of the Gatling Gun (or, for serious gun geeks, the multi-chambered Aden gun).

It had one extra feature noted in the plans; it used a traditional round chamber to fire round bullets “for use against Christians”, the plans noted (I’m paraphrasing).  But if the troops were facing Moslem troops, the plate could be swapped out for one with chambers bored for square bullets (and no, I don’t recall any plans for square barrel bores), on the theory that square bullets would cause grislier wounds and do more damage.  Of course, being Mohammedans, the extra cruelty was justified, at least to the inventor.

There’s nothing new, there, of course.  A teacher of mine in high school – a Vietnam-era veteran who served in the US or Germany, if memory serves – recalled that one of the first things that the drill instructors did in basic training in wartime was to dehumanize the enemy; Vietnamese and Japanese and German humans became “Gooks” and “Japs” and “Krauts” and what-have-you.  Because killing humans is hard – but pushing a bayonet into a hateful caricature is easy.

Of course, German society (like much of Europe) had a solid head-start in dehumanizing Jews.  Hitler pushed things over the edge – but when it came to reducing a class of humans to untermenschen, he stood on the shoulders of giants.  Hateful, loathsome giants.

For most people – normal, decent people, at any rate – the first step on the road to unspeakable hatred is the belief that somehow, your opponent is less worthy of the decency most of us afford to actual humans.  And once you get past that, really, it’s a hop skip and jump to any ghastly horror you can imagine.

Emily from X Perspective is, by the way, a normal, decent person.  But a recent posts shows some of the dehumanization that is swallowing the left in re Sarah Palin. 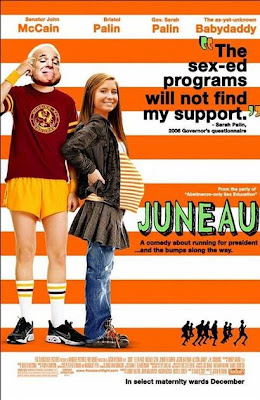 I admit to a small amount of hypocrisy of my own here: in general, I believe we should leave the kids out of this election – it’s not the girl’s fault her mother is running for office. But this was just too spot-on not to share.

“We should leave kids out of politics – unless we really hate what their parents [supposedly] stand for?”

And then, all bets are off?  Because decency is only for people who believe as “we” do?

And where’s Palin’s “hypocrisy?”  She – and, we presume, her daughter and future son-in-law – are pro-life.  And they’re following through on that belief.  Perhaps that’s a form of logic impermeable by conservatives; either way, I’m just not seeing it.

Leave aside that the Juno analogy is completely off.  It supports Palin’s, and the pro-lifers’, stances; the Juno character had the baby, which, by the way, pissed off the pro-abortion crowd to no end – especially here in the Twin Cities, from whence Juno screenwriter and last year’s Hottest Writer Ever, Diablo Cody, sprang a few years back; local “feminists” were in a aorta-busting froth that Ms. Cody didn’t have young Juno abort her “oops”, more or less as they are with Bristol and, for that matter, Sarah Palin.  On whom, by the way, “feminists” have also bestowed dictatorial power over her daughter and her “reproductive choices”.  But that’s just a sign of a photoshopper with no command of metaphor.

On the other hand, every time the left slags Palin and her family, there’s another struggling middle-class-or-lower family who realizes there’s somebody running for the White House who just plain gets it.  And that translates into votes.

So by all means, photoshoppers; photoshop on!

19 thoughts on “Square Bullets For The Infidels”