My neighbor AVERY LIBRELLE is concerned about gun violence.

We met at a local coffee shop, where we spoke over the sound of a group of locals that was keeping alive the tradition of out-of-tune folk music played by large, enthusiastic groups of the tone-deaf.

LIBRELLE:  We need to ban high-clip bullets and assault weapons!

ME:  Oh, I’ve only been having this argument for 25 years.  For starters, they’re called “high-capacity magazines”.  A “clip” as a general term for “anything that holds bullets” is a bit of Hollywood slang.  Really explaining it requires me to get all pedantic about how guns work, and I know you don’t care, and explaining it really takes me off the topic, but here – let me show you this:

“Clips”, pretty much by definition, are not “high-capacity”.  To talk much more about it would be to go onto a tangent that only gun geeks really care much about.

LIBRELLE:  Anyway – you can not show me a reason anyone needs a…what?  High-capacity “magazine”?

ME:  I can show you several. Here’s one; a woman hiding with her children shot an intruder with a revolver – which is what they used to call a “six-shooter”, because it holds six bullets.

LIBRELLE:  That seems kinda high-capacity – the founding fathers never thought of it when they were writing the Constitution – but OK…(Reads article) OK, but the woman survived, and the criminal’s in jail!

ME:  Read closer.  It was one burglar.  She shot six times, hitting the guy five times, in the face and neck. Which, by the way, is pretty good shooting under that kind of stress.  So think about it; that’s five shots, in the face and neck with a serious-caliber pistol, and the guy lived.  And there are cases of people surviving many, many hits by serious bullets and living to tell the tale.  One bullet can kill someone instantly – if it hits the brain stem – but a person can still function just fine if they’re hit in the heart, for a few seconds anyway.  Hits in the lungs, liver, stomach, muscle tissue?  If they’re high enough, or dissociative enough, or drunk enough, or have enough adrenaline going, they may not even know they’ve been hit until they collapse from blood loss.

Remember the book Black Hawk Down?  There were stories of Rangers hitting Somali attackers with armor piercing bullets from their M-16 rifles – which are like AR15s, only they can fire full-automatic, like machine guns, and each of their bullets has five times the hitting power of that woman’s pistol – and they didn’t even know it, since they were high on adrenaline and qat.

LIBRELLE:  OK, so what?  The woman lived.

ME:  Right.  But I said it was one burglar.  What if there’d been two?  Like in this incident…

ME:  The woman in my story above fired all six shots at one burglar, and he lived to run away.  If there’d been a second burglar, then what?  The woman and her children could have been killed, raped…

LIBRELLE:  But that never happens!

ME:  Sure it does.  Sometimes burglars come two at a time.

LIBRELLE:  That’s why it should be left to the police.

ME:  The police miss their target on about 2/3 of their shots.

LIBRELLE:  Then it’s better to let the burglars take your stuff and go!

ME:  They don’t always just leave.

LIBRELLE:  Well, what are you supposed to?

ME:  Use a large capacity magazine.  That’s why most of this country’s police switched from “Six-Shooters” to pistols with 15, 17 and 18 round magazines – because you don’t know how many times you’re going to hit your attacker, and you don’t know which hit if any are going to take them down. and above all you never know how many there are going to be.  You don’t want to run out of ammo after six shots when you really, really needed seven.  Or 12, or 15 for that matter.  Because if you are in a fight for your life and you family’s with, say, three people, who are high or drunk or jacked up on adrenaline or just plain insane, you don’t know how many shots it’s going to take to end the threat on your life and your family’s.  And the seconds it takes to reload after you’ve fired six shots from a revolver, or ten from a semiautomatic pistol with the ten-round maximum magazine that Diane Feinswine is talking about, might very well be the seconds that it takes to show you what a pin-cushion feels like.

ME:  Sure, although what that really means in this case is “I agree you’re ignorant, and you agree you have no point against me.”

LIBRELLE: Oh, shut up.  Anyway, there’s really no reason for assault rifles like the AR15 or the AK47.  Experts say they’re useless for self-defense.  All they’re designed for is killing people!

ME:  Well,l for starters, your “experts” really aren’t.  And yes, there’s a place for them in self-defense.  Like, this case, where four men armed with handguns and long rifles invaded a guy’s house.  He resisted with an AR15, shooting one of them.  Or this guy, a security guard, who was attacked by several guys with guns, and repelled them with an “Assault Rifle”.

LIBRELLE:  But that’s beside the point.  Assault rifles are designed to kill people quickly and efficiently.

ME:  Well, on the one hand, so what? If the shooter is a good guy – that means “law-abiding citizen  firing in justified self-defense”, not “a nice fella”, by the way – and the other guys are not, then why’s that bad?

And on the other hand, no; they’re not designed to kill any more quickly than a deer rifle or a duck gun.  I mean, most “assault rifle” ammunition is less lethal than most of the bolt-action rifles that grandpa used to hunt deer and elk with.  And at close range, a shotgun can be much deadlier.  What military-spec rifles are designed to do is function reliably under difficult conditions, and never, ever jam when you’re in a pinch, and to not run out of ammo before your attacker runs out of attack.  That is all.

LIBRELLE:   But we should ban them so criminals don’t get them!

ME:  That’s utterly futile.  We “banned” machine guns – not “assault weapons”, but actual fully-automatic machine guns – in 1934.  Now – show me a self-respecting drug dealer or gang-banger who can’t find a fully-automatic Uzi or AK or MAC-10 out there.  And that’s almost eighty years after a nearly-complete ban!

LIBRELLE:  But their only purpose is crime!

ME:  The numbers refute you.  Long guns of all types – from hunting rifles to shotguns to assault rifles – kill about 400 people a year, and rifles like the AR15 and AK47 are a  fraction even of those.  1,700 people a year are stabbed to death; 500 are killed with blunt objects; nearly 500 are killed with fists and bare hands.  And yet there are millions of ARs and AKs in civilian hands around the country.  You could make a statistical case that, per capita, AR15s are involved in less crime, including murder, than any other type of firearm.

ME:  Facts are stupid things, aren’t they?

LIBRELLE:  I’m just…aaaagh!  Why do all you Second Amendment people have to be such dogmatists about it! We should be more like Europe!  They have reasonable gun control laws, and their murder rates are very low.

ME:  Most of those countries ban civilian guns.  And yes, their civilian on civilian murder rate is low-ish – although the gun ban in the UK has led to skyrocketing violent and property crime.  But the murder rate in Europe has actually been astronomically high.

LIBRELLE:  No it hasn’t!  Look at the stats!

ME:  No, those are civilian on civilian violent crime stats.  I’m talking all murders… 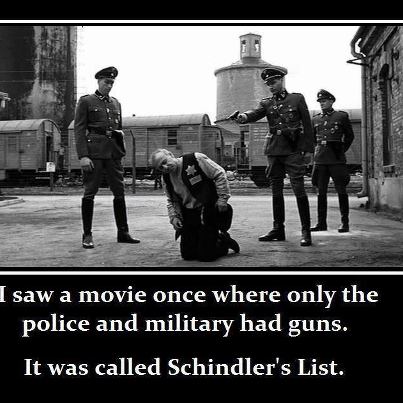 …including the ones where a government, unhindered by an armed and uppity population, is able to murder its own people by the box lot.  Three million in Ukraine in the thirties; between 20 and 60 million in the USSR from the twenties through the fifties; 11 million, including six million Jews, in Germany, which was an advanced, westernized, first-world economy.  The murder rate in the US is about 5 per 100,000.  The murder rate among Jews in Europe was about 70,000 per 100,000.

LIBRELLE:  Wait!  You’re saying the Second Amendment is about resisting government if it tries to do something evil?  That’s just paranoid.

ME:  Well, let’s hope so.  I’m willing to do my bit to make sure that it stays that way.  Anyway, that’s a bit of a tangent.  You asked why people needed high capacity magazines and ugly, military-grade semi-automatic rifles.  There you go.

LIBRELLE:  You must be compensating for something.

ME:  Yes.  I’m compensating for the fact that there are evil people in the world.  A gun that shoots, and keeps on shooting until the evil dies, is, pragmatically, the best defense that I, Mitch Berg, have at my disposal to deal with my share of that evil, if it comes bashing through my door at 2AM.

LIBRELLE:  Clearly you are racist.

26 thoughts on “The Case For Ugly Guns And Big Magazines”