…where “Well-Regulated” means “can hit what they shoot at”, and “militia” means “civilians with guns”, can have an incredible impact on the world when they need to.

It was 69 years ago today, during Germany’s invasion of Norway, that an ad-hoc group of Norwegian soldiers and armed civilians repelled a German attempt to capture King Haakon VII and his cabinet.

Germany invaded Norway by surprise.  Norway’s policy at the time was absolute neutrality – in other words, belief that all belligerents were equally wrong – which led them to hold that the British, French and Poles were just as wrong as the Germans for World War II.  It’s a footnote in history that they were, for their own purposes, basically right; as the German invasion force sailed and flew toward Norway, a British force was also moving to try to seize Narvik, as the jumping-off point of a campaign to cut off Swedish steel supplies from the German war machine.  Events changed the British invasion force into group of timely reinforcements.

Norway, being officially pacifist both as a practical matter (it’s a small country stuck between military giants) and a political one (they were controlled by a socialist government), had only very recently decided to modernize its military. 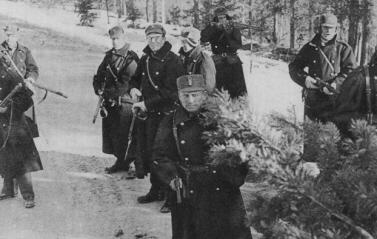 Its navy’s small destroyer and torpedo boat fleets had been built in the 1910s at the latest; it’s two “battleships”, really nothing more than harbor guard ships, were antiques from the 1890’s.

Coastal defense “Battleship” HNoMS Eidsvold, blown up and sunk in the opening moments of the war after being torpedoed by surprise, with a loss of all but six of its crew of 181.

The Germans went straight for the Norwegian jugular, attempting the contemporary equivalent of a “shock and awe” campaign.

Fallschirmjäger (paratroops) landed at key spots around Oslo, seizing key government installations; ships with German troops landed out of the blue at others.  One of them – the heavy cruiser Blücher, loaded with a battalion of German troops – went barrelling up Oslo fjord.  I’ts mission was to land the troops at the head of the fjord, cutting the only real road out of Oslo to the interior, preventing King Haakon and his government’s escape on the chance that the paratroopers missed him.

And it was there, and only there, that Norway’s formal defenses worked; an antique, 40-year-old torpedo, fired from a tube at the Oscarsborg fortress, sank Blücher, killing hundreds and preventing the rest of the invasion fleet from blocking Haakon’s escape route.

KMS Blücher blazes as it sinks

Haakon and his cabinet escaped into Norway’s interior, to lead a motley collection of troops from Norway’s tiny army, and thousands of “reservists” who were, truth be told, mostly members of outdoors and hunting clubs.

It’s there we pick up our story.

With Haakon’s escape, the German command detailed a raid to try to capture him.

A detachment of Germans Fallschirmjäger, the elite of the German military at the time, trained and armed with the best the Wehrmacht [*] had, launched what we’d call a “commando raid” today (the term “commando” wouldn’t be introduced to these types of troops for another year or so).  They drove off into the interior…

…and smacked into a Norwegian roadblock at Midtskogen Gård, near Elverum.

The Norwegians – a company of Norwegian royal guards, reinforced by a bunch of rifle club members armed only with antique-y Krag-Jørgensson rifles and hunting pieces, kicked Nazi ass, killing two Germans (one of whom had been the German military attache to Norway before the Nazi treachery unfolded and he took his place as an officer) for a loss of three wounded Norwegians. Rumors that anyone yelled “Wølverijne” while shooting at the Germans are completely unconfirmed. “The founding fathers were writing about muskets when they wrote the Constitution!” Norwegian citizen-soldier, armed with the “assault rifle” of the day, takes aim at an invader.

Most importantly, the Germans realized the motley collection of Oles and Svens had delayed them to the point where King and Cabinet had escaped; the Germans retreated to Oslo, and King Haakon got away to the UK, where he led Norwegians in exile against the Germans for the next five years.

And so while the militia couldn’t defeat the Nazi war machine outright, it did give it a bloody enough nose to give Norway – and freedom – a chance to fight another day.

The rear guard; Norwegian and British soldiers in the interior, 1940

Further proof, were any needed, that Liberals are wrong.

* Military history geeks: Yes, I know – Fallschirmjäger were part of the Luftwaffe. not the Wehrmacht. Work with me here.

33 thoughts on “The Well-Regulated Militia…”