In 2008, Candidate Obama’s pick for Energy Czar, Steven Chu, said: “Somehow we have to figure out how to boost the price of gasoline to the levels in Europe.” 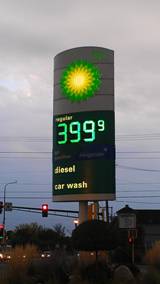 So have we achieved Secretary Chu and Candidate Obama’s goal?

Gas Prices in Europe are in the $9.00 per gallon range.

No, we have not achieved the President’s goals. We’re only half-way there.

At the convention, President Obama asked for more time to accomplish his goals.

It’s going to be a long four years.

Dying to see what he does with natural gas…

25 thoughts on “Mission Half Accomplished”