I’m shocked – but not surprised – to hear that Bin Laden was “hiding” in a multi-milion-dollar “hideout” in Abottabad, Pakistan – a good-sized, garrison town; it’s be sort of like finding him in Louisville, Kentucky.

The event was, naturally, twittered:

A man in Abbottabad, the town where Osama bin Laden was killed by the U.S. on Monday, inadvertently live-tweeted the attack as it started.

The man, who uses the Twitter handle “ReallyVirtual”, identifies himself as Sohaib Athar, “an IT consultant taking a break from the rat-race by hiding in the mountains with his laptops.” 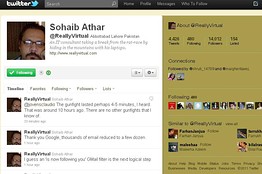 Around 11 hours ago, according to the Twitter timeline, Mr. Athar first tweeted about a helicopter hovering above him at 1 a.m., saying it was a “rare event” for Abbottabad. That would have been at about 3.30 p.m. Eastern time on Sunday.

Still, Mr. Athar seems to have thought of it as a mere annoyance, as his next tweet was “Go away helicopter – before I take out my giant swatter :-/”

Within minutes, he tweeted: “A huge window shaking bang here in Abbottabad”

This is going to make life interesting in Pakistan.

2 thoughts on “In Plain Sight”