David “JournoList” Weigel, writing at Slate, wonders “Where Are the Thugs?“.

Michelle Malkin promises to do “the reporting the Tea Party-bashing national media won’t do on the rabid outbreak of progressive incivility and violence at Big Labor protests across the country.” Sounds promising! But here’s what she delivers.

I suppose you could call this…:

I mean, come on – if a Tea Partier had been caught with a sign like this, ever, we’d still be hearing about it.

And as we discovered during the 2008 campaign, no crudity is beyond the pale…when referring to conservative women.

– At a rally in Providence, one asshole shoved a cameraman and was arrested and taken away, union members cheering the arrest.

– In Denver, a black conservative was insulted in racial terms.

And here, Malkin was right; the media observes a very pronounced double standards.  Here was the attack on the black tea partier:

Even the faintest, most ambiguous perception of potential racism – from a conservative – can give the media the vapours.  The national media is still hyperventilating about a supposed racial attack against black Congresspeople that never happened.

– At a protest outside FreedomWorks’ office, a union member being filmed and interviewed got pissed and struck Tabitha Hale; someone else called someone a “bad Jew.” 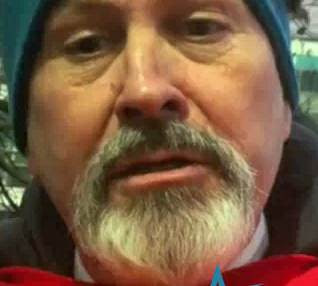 Where are the thugs, indeed?

But Weigel misses the point.  It’s not that there are thugs at a union action.  That’s like saying “that Mafioso just ate lasagna!”

No – the point is that the media observes a systematic double standard; leftist violence and thuggery is ignored, while the media goes out of its way to find, even manufacture, crimes on the right.

Weigel notes (as part of an apology for impugning Michelle Malkin’s journalism):

I just spent four days in Madison and the state Capitol, reporting, and saw absolutely no violence. There were no arrests on Saturday, when 80,000 liberals rallied and a smaller number of Tea Partiers counter-protested. There were no arrests last night when hundreds of angry protesters watched the GOP-led Assembly pass the budget repair act. There are no arrests, so far, in Madison. And Malkin cites actual violence in only two cities where protests have taken place.

…and it’s irrelevant.  Because thuggery isn’t just about hitting people.

By the way, David Weigel – the thugs are right here:

6 thoughts on “Weigel Misses The Point”