It was seventy years ago today that Italy invaded Greece.

Chaos Theory is a mathematical, physical and, occasionally, philosophical theory that says among other things that any action can, theoretically, have a hypothetically infinite set of consequences – even consequences that would never have been predictable.

Such was Italy’s invasion of Greece – from whose language, ironically, the word “Chaos” comes.

Mussolini, feeling left out of the big conquest-go-round (he’d been stymied by French resistance in the Alps during the Battle of France, had had only captured a few square miles of the country, and his total so far had been the occupation of Albania in early 1939, and the 1935 conquest of Ethiopia – and even that wasn’t going all that well.  Mussolini decided he needed to rack up a trophy.

Months  of diplomatic maneuvering followed, of course.  The Greek Government was actually fundamentally friendly to the Nazis; the Greek dictator, Ioannis Metaxas, was fundamentally a Fascist in the classical sense of the term, and sought friendly relations with Hitler (who, to be fair, seemed to be the winning side at this point in the war).

But Mussolini saw low-hanging fruit.  His few successes in the war so far had come at the expense of the British; he’d swept aside a token British force to occupy British Somaliland.  Since Britain seemed to be on the ropes so far, he sought to build up bases from which to securely pick over what he thought would be the corpse of British power in the Eastern Mediterranean – Egypt, the Suez Canal, Palestine – to add to his new Roman Empire.

So seventy years ago yesterday, Mussolini demanded that Metaxas allow his troops free passage through Greece to occupy strategic locations – naval and air bases that could be used as jumping-off points in the Eastern Med.

It was an absurd request, designed to be rejected – and Metaxas knew it.   When the Italian ambassador presented Mussolini’s ultimatum, Metaxas replied in French (at the time, the lingua franca – hah! – of diplomacy), “”Alors, c’est la guerre” – “Then it’s war”.  This was passed on to the Greek people in a single word – Ochi.  “No”.

It was a setup, of course; the Italians invaded promptly, seventy years ago today, with half a million men and a division of tanks and six times as many planes as the Greeks owned.

The Greeks were a small country – but they were an exceedingly tough nation.  The people who hewed a living from the rocky peninsula had just won their independence from the Turks within the previous generation, and still held their independence dearly.  And they had had generations of experience fighting in the rocky, inhospitable mountains. 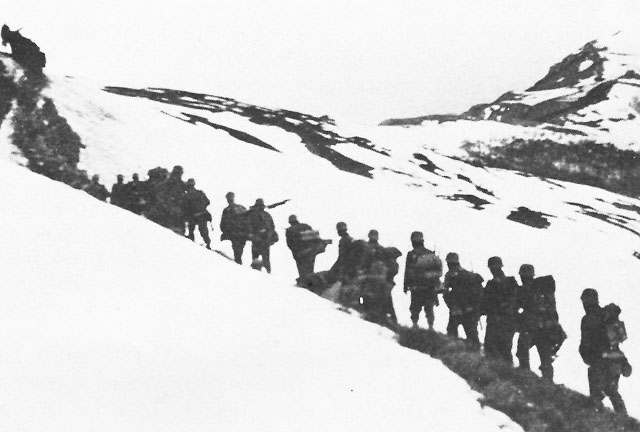 Greek troops moving through the mountains, 1940

While the nation was poor, it had invested heavily in its military – then as now.  Even today, the Greek military is exceedingly large for the nation’s size and strategic position; it’s hereditary hatred of Turkey, whose military is equally exaggerated, keeps things tuned to a fever pitch.

And partly due to that national history, and partly due to Metaxas’ militant nationalism, the Greeks were ready.  They’d built a line of fortifications in the extremely rugged country along the Albanian border.  The Italian offensive smacked into the Elaia-Kalamas line – and bounced off.

By mid-December, the Italian offensive had petered out.  A Greek counteroffensive tossed the Italians out of whatever parts of Greece they’d conquered, and the riposte lopped off a quarter of Albania by April.

In March, concerned by the potential threat to vital British territory at Suez and Crete, Churchill diverted British troops from Africa to Greece to help backstop the Greeks.  Faced with the complete implosion of his ally and, potentially, the loss of North Africa, Hitler responded by invading Greece in April of 1941.  Invaded from Albania and Bulgaria – Hitler’s ally – Greece fell in a three-week Blitzkrieg of immense brutality, leading to four years’ occupation (and fierce Greek resistance).

So let’s go back to chaos theory.

The invasion of Greece set off a chain of events that, directly and indirectly, changed the course of World War II.

And so a small,  pointless, ego-driven sideshow had side-effects that tipped the outcome of World War II, the Cold War, and our current economic climate.