I’ve spent a good part of the last month thinking about this next episode.

On August 12, 1940, World War 2 was three weeks shy of a year old.  In those 49 weeks, Hitler’s Germany had conquered all of Europe from the Polish/Russian border to the English Channel.  Poland, Norway, Denmark, the Netherlands and Belgium and fallen.

And finally, Hitler had knocked out the continent’s greatest military power in less than a month, sending its survivors and its British allies reeling across the Channel.

The previous month had been like the fourth round of a major prize fight; after three rounds of furious punching, the fighters probed and regrouped, looking for developing weaknesses and rebuilding their strength for the climactic rounds.  The German Luftwaffe had spent the month plinking at British convoys in the English Channel and probing the Brits’ defenses.

On August 12, the German plan was scheduled to switch into high gear.  The plan – called Adlerangriff (“Eagle Attack”) was…

…put off for a day due to weather.

And for all the talk over the past seven decades about the pilots and their planes – the Douglas Baders and Adolf Gallands, the Spitfires and the ME109s – this phase of the Battle, which lasted only ten days, came down to technology and intelligence.

The sky is a big place.  And even small countries by American standards, places like Britain and France and Germany, have a lot of it.  That’s why even back to the earliest days of air to air combat, the hard part wasn’t shooting the enemy down so much as finding him.

Over confined spaces like the Western Front in World War I, it was less difficult; the whole front, with its millions of combatants and hundreds of planes facing off, was only a few hundred miles long, and the actual battles were quite compact.  The odds were that if a World War I ace like a Richtoven or a Rickenbacker or a Guynemer or a Mannock went looking for a fight over an active battlefield, they’d find one.

But Britain suffered terribly from bombing attack during the First World War – Zeppelins and crude two-engined bombers launched from bases in Belgium that’d lob bombs over London and other cities,  sowing more terror than damage, with rough impunity; the Brits had no idea how to find and track aircraft in the dark; they were dependent on ground observers seeing shapes in the moonlight, estimating course and speed, phoning the report in to…someone (because there was no coordinated air-defense command, much less air-defense command center); then, phone a report based on the estimated course and speed to an airbase in the area that may or may not have had fighters ready to take off, to fly in the dark without IFR instruments of any kind to even navigate, much less detect a target, not to mention trying to get their anemic, crude aircraft to climb to the altitude the attackers were at (which could alone take half an hour). And then find a target in the dark based on a crude course-distance calculation made based on eyeball observations from the ground.  And that was even if the famously fickle British weather made flying possible (although the German bombers and especially Zeppelins were fairly immune to the weather; they just had to lob bombs over the general area of the world’s most sprawling city).

It was with these raids in mind that Britain paid very close attention to research in the late 1920’s to the idea of measuring the time it took for a radio signal to bounce off an object and return to a receiver.  In 1936, British researchers were able to bounce a signal from a ground station off a passing Handley-Page Herford bomber that was completely unaware of its place in history.

The British Air Ministry’s research section, led by Sir Robert Watson-Watt, took a course that, seventy-five years later, should endear him to a generation of IT customers who want perfection for no money down; he rushed the production of the radar sets and stations into production long before the system had been perfected or polished; he said “third-best is acceptable when second-best won’t be available in time and best will never be built at all”.  So the first production British radar system, code-named “Chain Home”, was crude even by appearance:

A series of 300 foot tall towers along the British coast, Chain Home was bone simple by comparison to later sets.  Its “user interface” was a scope with a single cathode-ray line, like an old CRT TV that had gone on the blink; a “blip”, or uptick, in the glowing line would tell an operator the bearing and distance to the target.  Usually.  Not all the bugs had been worked out.

But by the time the war started, Chain Home was up and operational, providing Britain with all-round coverage, 24/7, in all weather.

And, most importantly, the stations – around seventy of them, each with a detection range of a little over 100 miles – were connected by phone with RAF Fighter Command’s control room, from which Air Marshal Hugh Dowding, chief of Fighter Command, would run the battle.

Operators – mostly women – would take phone calls from the radar stations with the course, height and speed of incoming raids; as signals from more than one station came in, the raid’s location could be precisely fixed, even before it left French airspace.  The location, direction, speed and strength of each raid were laid out with wooden “counters” on the huge map table, moved about with croupier’s paddles by the female airmen, overlooked by the operations staff on the balcony above, who would “scramble” fighters from airbases in the raids’ paths to intercept them, and maneuver squadrons from bases just off the path to pester the raids as they tried to return home.

It was a huge leap forward from 1918.  And the Germans, in the midst of building their own radar chain (in typical German fashion, building the much more sophisticated Freya system, which was coming in late and over budget, with only eight stations ready for action by the time the Battle started), knew this.

And so the target of Adlerangriff was these radar stations, and the airfields near the coast from which the first wave of RAF fighters would scramble.

It sounded simple in concept.

So that was the first phase of the Battle of Britain – the German attempt to bomb the Chain Home stations.

And looking at the picture of the huge latticework antennae above, you’d think that’d be an easy job.  But from 15,000 feet up, the antennae weren’t all that big; the radar operators huts were flimsy, above-ground wooden structures, built in great haste to get the system on the air, but they were also tiny, almost invisible from high up.  And the fact is that the classic World War 2 bomber, whether a B29 or a German Heinkel 111, was not a precision bomber.

In fact, nothing back then really was. 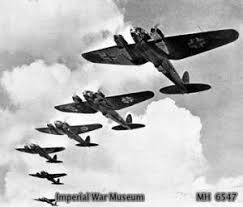 And it’s here we get into another technological area – in this case, a lag rather than an advance.  In our age of precision-guided cruise missiles and Predator drones shooting missiles through windows of buildings, it’s hard to recall that in 1940, attacking people from the air was incredibly imprecise.

High-altitude daylight level bombing, even as practiced by the Americans later in the war (with much-advanced technology) usually did well to get fifty percent of the bombs to drop within 1000 yards of the target from 20,000 feet.  German technology at the beginning of the war was incredibly crude even by that standard.

“Precision bombing” in World War 2 was the art and science of getting a bomb to land on something the size of, say, a moving ship, to say nothing of a tank or individual building.  It was the province of two different kinds of planes and sets of tactics; the “Dive Bomber”, and the low-level fighter-bomber.  And they had to do it using the most primitive instruments; simple geometric and reflector sights, and the pilot’s  own intuition and experience. Later in the war, of course, both were elevated to high crafts;  American Thunderbolt and British Typhoon fighter-bombers would plink at troop units, trains and indivdual tanks with bombs and rockets; German Stukas armed with rockets and automatic cannon shredded through Soviet tank formations; US Navy dive bombers sank Japanese battleships and carriers; British Mosquito light bombers developed the craft to its apogee, dropping bombs on Gestapo jails precisely enough to free prisoners without killing them, mostly by constant refinement of math and experience.

Hitting radar sites was particularly difficult; even a huge antenna like a Chain Home station is a small target from the air; as the war progressed, they got much smaller (within a year, night fighters were carrying air-interception radar into the air to hunt night bombers); even twenty years later over Vietnam, attacking radar stations was such a hit-and-miss proposition that the US invested millions in building missiles and bombs that could home in on radar signals.

Messerschmitt 110 "heavy fighter". A failure as a fighter, it served mostly as a light bomber in the Battle. Fitted with radar later, it became a scourge of British night bombers in 1943-44

So seventy years ago today, the Luftwaffe embarked on a three-point plan of attack:

The attacks on the airfields had little effect – but well get back to that.

The fighters?  They occasionally “bounced” flights of Spitfires and Hurricanes, on their way to attack bomber and Stuka formations, causing casualties (and losing plenty in the process), breaking up some interceptions.  However, the British – using radar and the simple math, vectored the RAF interceptors away from the small  “blips” that were moving at 250-300mph – obviously fighters – and toward the big plodding, 180mpg bomber blips.

The initial attacks put four radar stations out of commission for a m atter of hours – less than a day or so in all cases.   The crude simplicity of the British equipment made repairs fairly easy.

But the Stukas, flying with little to no fighter escort, were shredded by the British defenders.  By August 23, the planes that had so terrorized the Poles, and had blasted the decisive holes in the French lines three months earlier, were withdrawn from combat.  They were never used in significant numbers against significant enemy aerial opposition again in the war.

Luftwaffe chief Hermann Göring saw the casualties among the Stukas and the Me110 crews – which cut him deeply, as the 110 had been his pet project before the war – and decided after ten days to change tactics.  We’ll get to that in about ten days.

And it’s there we get to the failure in intelligence.  The Germans saw the casualties, and saw that for all the effort only four radar stations had gone offline…

…and missed the opportunity that made the Brits genuinely nervous; to keep hitting the sites until spares ran out; to hit the generator stations that provided the crude, power-hungry sites their electricity; to hit the civilian telephone exchanges that, incredibly, Chain Home used to call its reports back to Stanhope.

And so after ten days, Göring switched the attack, never knowing how close he came to giving the RAF a handicap that they might never have been able to surmount.

It wouldn’t be the last, of course.

But we’ll talk about that in about ten days.

8 thoughts on “Battle Of Britain: Ramping Up”