Lieutenant Paul Jürgen Vollmer of the 120th Württemberg Landwehr Regiment’s 1st Battalion was hoping that his approaching adjutant was bringing good news that early morning of October 8th, 1918.  Most of the reports he had been given had been to retreat as American and French forces slowly but surely carved their way through the Argonne forest, albeit at great cost.  The news was indeed good – the Prussian 210th Reserve Infantry Regiment had arrived at the front, perhaps allowing Vollmer to counterattack.  The veteran German commander rushed 200 yards to the front to see his reinforcements.

What he saw was only 70 new men sprinkled among his own regiment, all with their weapons on the ground and eating instead.  Vollmer vainly attempted to get the men marching; they said they wouldn’t move until they had breakfast.  Only the sounds of gunfire and retreating Germans past a nearby hill rallied the 210th to set down their utensils.  One of the fleeing Germans shouted “Die Amerikaner Kommen!” as he ran past, prompting a handful of the 210th to throw up their hands in surrender.  Vollmer immediately grabbed his pistol and forced a few of them to pick up their weapons.  As he did, a few Americans ran at the German position, one of them shooting his M1911 semi-automatic pistol.  Vollmer and the rest of his men were sure this had to be the advance scouts of a larger American unit and after Vollmer had emptied his pistol without hitting the lead American – and seeing the American shoot several more of his men – he offered to surrender.

A large American with a red mustache, broad features and a freckled face approached Vollmer and accepted the surrender of the men under Vollmer’s direct command.  It was only then that the German realized no American reinforcements were coming.  132 Germans had surrendered to (then) Corporal Alvin York and six other soldiers.  The Americans were beginning to learn how to fight and win in the trenches. Alvin York – he would become one of the most famous individual soldiers in American history, but his post-WWII politics (he was in favor of attacking the Soviet Union) had him fall from public view

The Americans had been served their first real taste of defeat in the opening days of the Meuse-Argonne Offensive, as the German counterattack badly bloodied the 35th Division to the point of nearly destroying it.  Among the many casualties had been Lt. Col. George S. Patton who was personally leading from his 304th Tank Brigade.  Patton had been frustrated with the inability of his tanks to advance and rounded up some men in a nearby trench to dig out his stuck tanks.  One of the soldiers questioned the wisdom of exposing themselves to German artillery for Patton’s tanks – Patton replied by striking the soldier in the head with a shovel.  Even Patton remarked in his diary that he may have killed the man, who did not get up after being struck.  Patton’s willingness to expose himself and others to dangerous conditions would catch up with him that very same day, as Patton would be hit in the leg with a machine gun bullet that tore a wound the size of a silver dollar through his buttocks.  If not for the courage of his orderly, Private Joe Angelo, Patton would have bled to death near the town of Cheppy in the forests of the Argonne.

Despite the serious losses, both the Americans and the French had made gains in the Meuse-Argonne region.  But the German counterattack had scattered American units, with some like the members of the 77th Division, now trapped behind enemy lines.  554 men of the 77th had advanced so quickly in the opening phase of the offensive that they had separated from the rest of the Allied line, and the German attack had cut them off completely.  For six days, the “Lost Battalion” held out without reinforcement or resupply against furious German assaults.  Efforts to drop supplies via plane failed in the thick Argonne forests and miscommunication via carrier pigeons resulted in the “Lost Battalion” ducking for cover as American artillery rained down upon them.  But despite many men suffering multiple injuries, 194 of the original 554 members of the battalion managed to hold off until being rescued, with the rest either killed or captured.  39 men of the makeshift unit received citations, including 7 Medal of Honor winners.

Acts of heroism like “The Lost Battalion” and Corporal York were slowly repairing the reputation of the American military in the eyes of their Allies.  But to the average British or French soldier, the arrival of American troops, no matter how inexperienced, brought some sense of hope that the war was coming to an end.  Millions of Americans had begun to stream into France in 1918, with another entire army’s worth of engineers preceding them building 82 new ship berths, nearly 1,000 miles of additional rail tracks, and over 100,000 miles of telephone and telegraph lines.  Even to the least optimistic Allied soldier, the presence of fresh American troops meant at a minimum a lot of energy and luxuries.  In the words of one member of the Royal Fusiliers:

“First time I met the Americans…I loved them; they were all so generous. We didn’t see many of them but we passed a lot once, they were on the side of the road there, chin-wagging and you know, they were pleased to see us, you know, mates. And they were very kind, they gave us cigarettes and chocolates and things like that.” 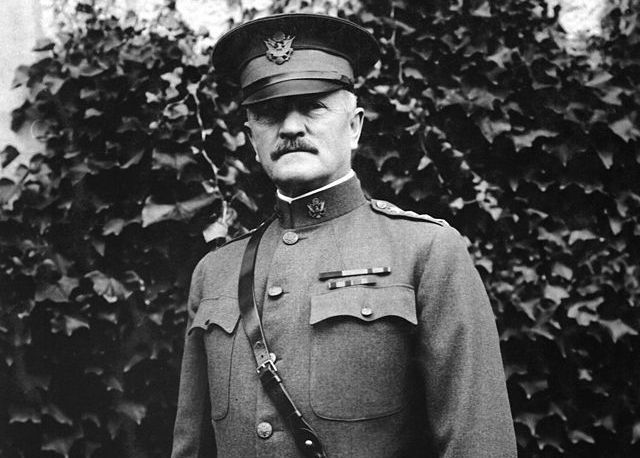 Cigarettes and candy bars were welcome additions to the Western Front, but hard fighting remained to get the Germans out of their Hindenburg Line positions at Meuse-Argonne.

On October 4th, 1918, the next phase of the offensive began and the results looked unfortunately much like the end of the first phase – with horrific American losses.  The 1st Army attempted to surprise the Germans with an assault without artillery preparation.  Only the First Division made any headway but at a terrible price – nearly half the division was killed or wounded in less than a week.  Flying overhead, General Billy Mitchell, the commander of US Air Service, groaned aloud as he watched the uncoordinated attacks.  He said it was like watching a man butt his head against a brick wall.

With the French making more progress on the flanks of the American advance, Pershing wisely decided to exploit their gains and sent more American reinforcements to aid the French assault.  The Germans responded by raining down poison gas shells in droves, but despite the gas – and a French desire to halt to preserve morale and resupply – the Allied attack was succeeding.  Still the cost was ghastly and Pershing and the American Expeditionary Force’s problems of transportation and supply were compounding the casualties.  An estimated 100,000 stragglers were wandering in the rear lines, the result as much from disorganization as declining morale.  Pershing was forced to cannibalize raw units fresh off the boats in France, leading green troops without trench training straight into the abattoir that had become the Argonne forest.  The strain of the offensive was as apparent on the American commander as it was on his troops.  Supreme Allied Commander Ferdinand Foch and Georges Clemenceau, the French premier, were hurling insults and demands for results at Pershing, especially as the American had resisted direct orders from Foch to participate in a British offensive in Flanders instead of fighting in the Argonne.  At night Pershing could be seen at his command, his head in his hands, speaking to the spirit of dead wife, stating that he didn’t know how much longer he could go on.

American troops wait to advance in a trench

At the lowest moment of the American Expeditionary Force, Pershing had perhaps his best idea – transferring control to his subordinates.  By mid-October, with fresh actually trained troops ready to continue the offensive, the Americans attacked the Hindenburg Line sections of the front.  The recent losses hadn’t weakened the resolve of the AEF’s officer corps.  When ordered to take the German position on the hill of Côte de Châtillon, commanding General Douglas MacArthur replied that if they failed, his entire famed “Rainbow Division” (named because it combined National Guard units from “over the whole country like a rainbow”) would be on the casualty list, with his name at the top.  True to MacArthur’s boast – the Rainbow Division cracked the Côte de Châtillon.  It would become the turning point in the whole offensive.  The Germans had been driven out of their most entrenched position in the Argonne and the whole sector looked ready to collapse.

Success in the Meuse-Argonne had been fueled in part by addressing the significant shortcomings in logistics, thanks in large part to future Army Chief of Staff George C. Marshall.  Then merely a captain, Marshall had risen in prominence by his willingness to publicly challenge Pershing on the organizational challenges the AEF had experienced since arriving in France.  Contemporaries thought Marshall had ended his career when Marshall angrily confronted Pershing during a frontline inspection in 1917.  Instead, Pershing promoted Marshall, eventually all to way to Colonel, giving him operational control over in the Meuse-Argonne Offensive.  George Marshall and his staff had to redeploy and reposition a vast army of 600,000 men, 4,000 artillery pieces, and one million tons of supplies more than sixty miles in a region with primitive roads.  The result was a traffic jam of epic proportions.  Yet Marshall made sure there would be fewer stranglers and no more feeding green draftees into the teeth of the German trenches.

By the end of October, the Americans and French were ready to advance on Sedan itself.  Without the key rail hub, Germany’s ability to move and supply most of the Western Front could be threatened.  And as the German lines unraveled, the last acts of the Meuse-Argonne Offensive would be played out with more German soldiers and equipment being captured.  As Sedan was liberated by the French, the result no longer mattered – the Germans were already negotiating the armistice that would end the war. 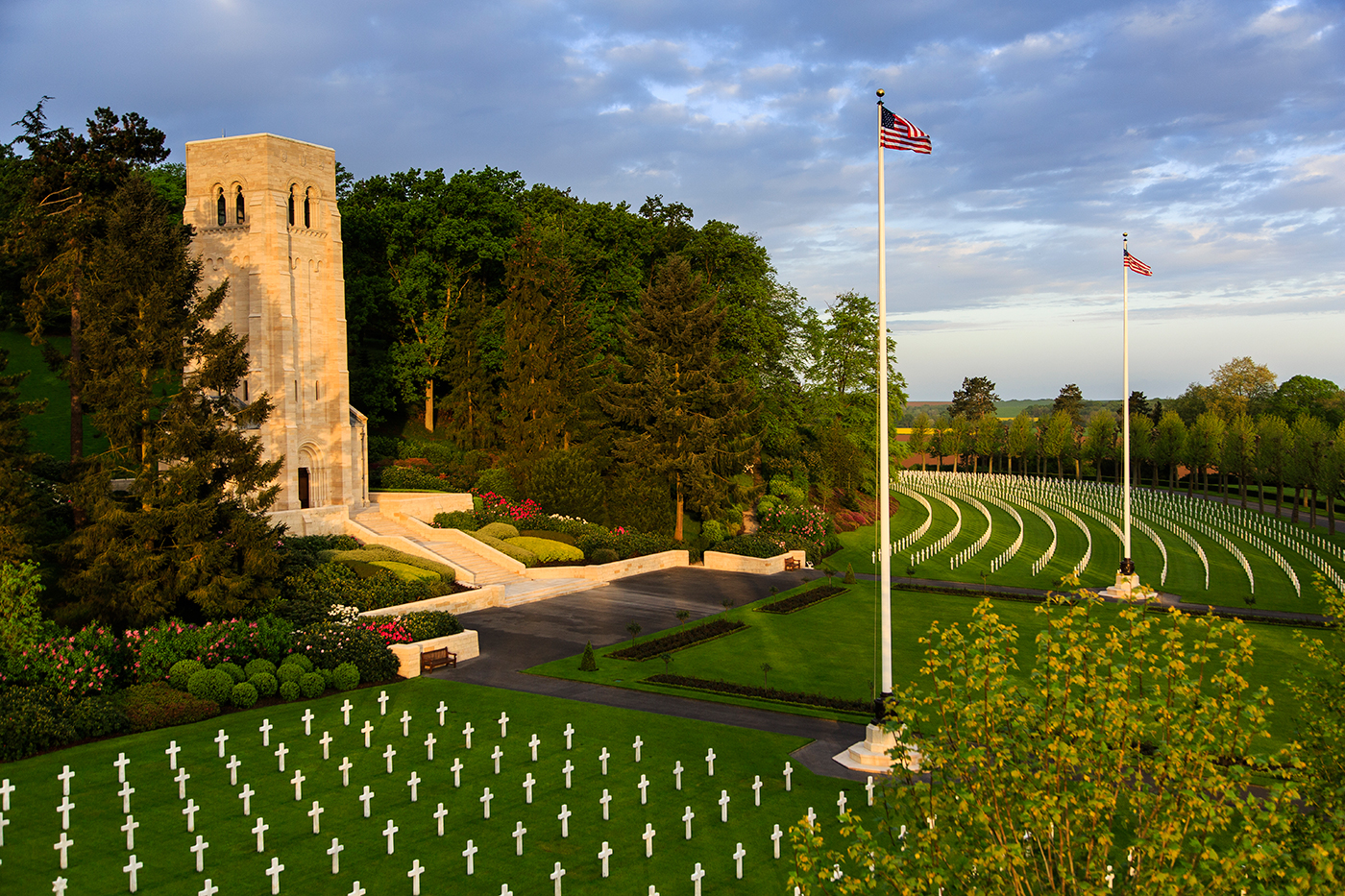 For the all the scale of the battle in comparison to others in American history, the Meuse-Argonne Offensive would be quickly forgotten outside of the handful of stories of heroism.  Corporal Alvin York would become Sergeant York and his autobiography would be a best seller while the film made of his exploits would receive 11 Oscar nominations and win two.  For the most part, York’s experience would be how the public at large would remember the offensive – a historical footnote in the lives and careers of men made indelible either by media or other actions in the next global war.

The Argonne forest gave the United States a taste of the sort of war that Britain and France had endured for four years, and despite a great deal of confidence, the American reaction to organized slaughter was little better than their European brethren.  An estimated 1 in 10 American soldiers in the Meuse-Argonne Offensive abandoned their posts.  Many due to the kind of experiences that Pvt. Elton Mackin wrote about in his diary: “A hundred and thirty-four of us had come back from Blanc Mont ridge. We had gone up a full-strength battalion, a thousand strong.”