If Ray Dehn is elected Mayor of Minneapolis, he will do for “Affordable Housing” in Minneapolis exactly what sixty years of “progressivism” have done for it in Manhattan and Detroit.  Simultaneously. Brooklyn in the 1970s, after twenty years of “affordable housing” rules.

He released his “affordable housing” plan this week.    And it promises to send more Minneapolitans racing for the ‘burbs”.

Guesses as to Part 1 of the plan?  Please – Dehn is a “progressive”.  It’s got to be “Redistribute Money!”

Increase funding for the Affordable Housing Trust Fund (AHTF): With national- and  state-level funding cuts, the city needs a consistent revenue stream to build more affordable housing. As Mayor, I will propose: Apartments in NYC in the 1970s. Hey, they were rent-controlled!

So in a city business community that is already terrible for business, Dehn will add a perverse incentive to move development to the ‘burbs, and push condos elsewhere.

And for what?  To ape Portland and Denver – where housing is getting scarcer and less affordable, the more their “progressive” governmetns intervene.

Build affordable housing at every income level: We currently build affordable units at 50% AMI, leaving too many families with nowhere to live in the city. The flight of low-income households to first and second ring suburbs also adds to our transportation crisis, where many remain underserved forced to find new ways to commute to work. By requiring additional units be built at 30% AMI or lower, we can limit displacement.

Thus continuing the city’s policy of warehousing the poor.  On the North Side and Phillips, of course.  Not Kenwood or Minnehaha Parkway or Nicollet Island.  Perish the thought.  That’d be too much limiting of displacement.

Implement innovative tax policies like value-capture financing (VCF): VCF distributes the benefits of neighborhood revitalization fairly among all residents, not just landlords by allowing the city to ‘capture’ a portion of the increase in land value. Any increases in property value will be directed into specific funds to be reinvested into the community to fund and preserve affordable housing 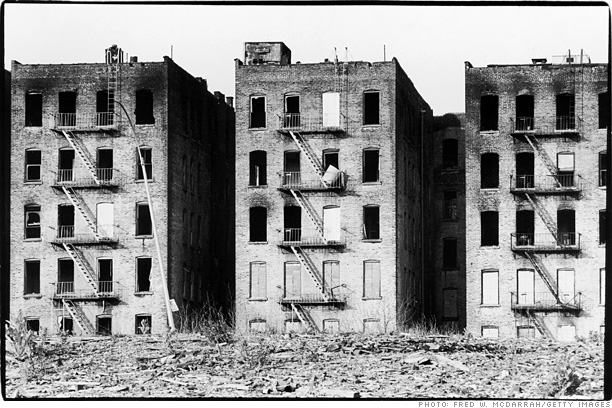 The bad news? You can’t evict anyone no matter what they do. The good news? Eventually they leave on their own.

In other words, saddle all development with a requirement to build multi-unit housing, market be damned.

Also known as “transferring public money to the city’s DFL political class”.   These “non-profits” are the DFL’s graft machine.

Dehn knows where his bread is buttered, anyway.

Economics 101:  when you force someone to pay something other than what they would on their own, “unintended” consequences are inevitable.

Yet another bureaucratic hoop to hop through, yet another disincentive to buy, improve and develop rental properties.

Rent control nearly extinguished the supply of “affordable housing” in all five boroughs of New York.

On the one hand, Minneapolis will penalize developers and landlords for improving their property, make it impossible to evict tenants who are destroying or economically dragging the property, and making it harder to sell the damn thing to get the hell out of Minneapolis. Detroit today. NoMi in 20-30 years under Dehn’s policies. SoMi down to the forties not long after that.

I smell a wave of apartment arson coming up.

In other words, make one of the few tools small landlords have completely useless.

So – warping the model for lending money to borrowers with dubious credit histories?

When has that ever blown up causing immense misery?

“We want more graft, and we want taxpayers nationwide to pay for it”.

But let’s set aside the graft for a minute.

Rent control meant landlords’ income from existing property was strictly limited.  Eviction laws meant that the consequences for skipping rent or trashing property could be delayed for months, sometimes years.  Gains taxes were easily absorbed or loopholed by the wealthy, but catastrophic for the small and mid-sized landlord.

As a result, by the seventies Manhattan was unaffordable to the middle class, while entire square miles of Brookliyn, the Bronx and Queens were full of vacant, burned out buildings that had once been actual, affordable housing before the landlords gave up.   And as NYC’s fortunes turned around under competent Republican leadership, the gans taxes ensured that only the wealthy could afford to build or improve properties in the formerly distressed neighborhoods.

So today, thanks to “affordable housing efforts” over the past three generations, Manhattan and most of the Bronx, Queens and Brooklyn across the East River from it are unaffordable to anyone that’s not well into six figures, and the poor have to commute in from the Rockaways and New Jersey.

And the polices that have made Detroit, Oakland, Saint Louis, Camden, Newark, Baltimore, Los Angeles and a slew of other cities simultaneously unaffordable to the poor and overflowing with abandoned buildings?  Substantially the same.

It’s a series of stupid decisions.

You just know Minneapolis will vote for it, don’t you?

64 thoughts on “Ray Dehn: “We’ve Got To Destroy Affordable Housing To Save It””