We’ve written at some depth in the past about Minnesota Gun Rights – an astroturf fundraising group that raises a lot of money and generates a lot of strident social media about 2nd Amendment politics in Minnesota, but has never actually delivered any significant results.   A bipartisan selection of Minnesota’s most committed pro-human-rights legislators repudiated MGR a few years back.

In 2014, they dropped a few boxes of literature in the Roz Peterson race in Burnsville – and claimed credit for the victory.  This, and a couple of misplaced ads on AM1130, were their total effort that cycle.

In this primary cycle, they sent a lot of email to the Hackbarth/Bahr race, and also direct-mailed GOP activists in the Daudt/Duff race. 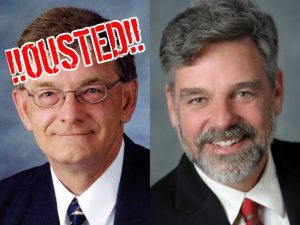 Near as I’ve been able to find from my sources on the subject, MGR’s entire “campaign” in the Bahr/Hackbarth contest was email.

But let’s break it down:  Tom Hackbarth had:

So sure.  Of course a couple of emails from MGR did the trick.

Of course, MGR expended even more effort in the Daudt/Duff race next door in 31A, apparently even sending paper mail – a sign of real commitment.

And the results?  Daudt stomped Duff.

Rob Doar of MNGOPAC/MNGOC said in social media “[MGR] swung much… much harder at Daudt, who won with over 72% of the vote…If they had any sort of political power, it surely would have manifested next door in 31A.  They are riding coattails, spinning stories…”